Despite failing to score, was still impressed with the Minutwomen

Despite outshooting St. Joe’s 13 to two, the Minutewomen were unable to convert for the fourth time this season 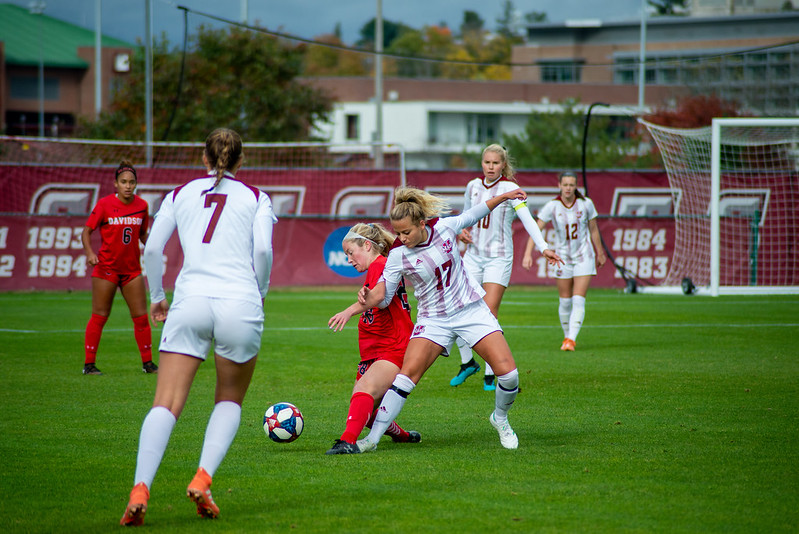 Massachusetts women’s soccer team coach Jason Dowiak has praised his team’s ability to defend together often throughout the season. But the offense has also been getting the job done––breaking the deadlock and scoring to win each of the previous four games.

Wednesday, however, the Minutewomen (5-3-1, 4-1-1 Atlantic 10) couldn’t score past a very deep-sitting St. Joseph’s (3-5-2, 2-2-1 A-10) defense. The back line held firm and blocked a number of shots. The Hawks’ goalkeeper Katie Cappelletti also contributed with two saves. Regardless of the shutout, Dowiak was rather pleased with the performance.

“I’m not really concerned about not scoring because of the quality of the players that we have and the comfort that a lot of them are finally starting to show,” he said. “Even with a minute left, we were thinking ‘[a goal] is still coming’. That’s what we were saying on the sidelines; we believed it. The opportunities were there tonight, it was just one of those games. Their goalkeeper made a couple good saves; they had two or three blocks around the six-yard box that I think in other games have gone in for us.”

Last Thursday, Dowiak’s side was victorious over St. Joe’s at home in another close-run affair. By the time of Wednesday’s game in Philadelphia, however, the Hawks had changed their shape to prepare for UMass.

“They made some adjustments between when we played them last week and tonight, and they had that time to prepare for us while we were preparing for Rhode Island,” Dowiak said. “In the first half, they were really condensing and packing into their midfield; their outside midfielders were very narrow. It made it hard for us to find our midfielders but when we did we really unlocked them, and that led to the best chances we had in the first half.

“Today, they dropped off a lot more this game and gave us a lot more time to swing the ball around. [I’m] frustrated obviously that we didn’t put it in the back of the net, but I think this was one of our most complete games in our ability to create chances.”

UMass’ Jenny Hipp registered four shots tonight, while Grace Pinkus, Lauren Smida and Olivia Gouldsbury each registered two. The Minutewomens’ closest chance came late on, when space opened up for Nissa Pereira’s shot that went just wide of the net. Despite shooting 13 times throughout the game, just two were on target.

The Minutewomen will battle La Salle next in a game that coach Dowiak says the players “are very hyped and excited about.” In its last matchup, UMass won via a 90th minute game winner. Dowiak will be looking for more of the same at 6 p.m. on Saturday. Midfielder Fatou Barry is expected to play after being cleared of injury this week––great news for UMass’ offensive line.

“We’re getting a lot of players finally getting back on the field, some after a long hiatus,” Dowiak said. “And with the way that we’re already playing, we’re feeling really good.”