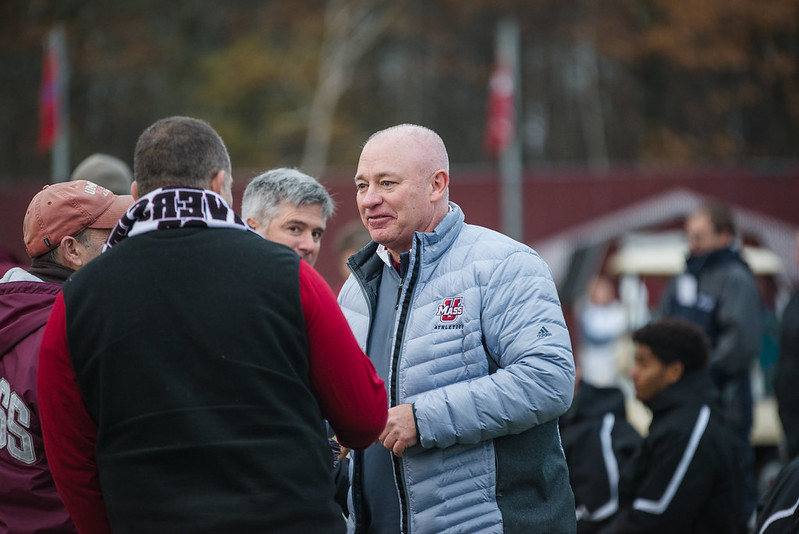 By Sophie Weller and Pablo Quiceno

Fran O’Leary, the Massachusetts men’s soccer head soccer coach, has had a long and successful career. His expertise has helped lead the Minutemen to the NCAA tournament this year. After a season full of cancellations and the uncertainty that the pandemic presented, his team fought hard. Despite not finishing on top of the Atlantic 10, their overall ranking earned them an at-large bid.

As UMass prepared for its game against Penn State, O’Leary reflected on this past season and what he expects from his squad. They have been continuously working and practicing, but O’Leary makes sure boredom does not play a factor.

“You got to enjoy it,” O’Leary said. “It really is what you bring on the day. I think the biggest thing is you want your team to look like the team you have had all season.”

Upon his arrival at UMass, O’Leary had a set of standards and expectations for the team. His experience allowed him to notice what worked and what did not, and he brought this with him.

What had become clear to O’Leary over his long career is that the players and staff need to have a love for the game and when recruiting his teams O’Leary looks for effort and a “great soccer mind.” He wants players who know the game and are going to go leave it all out there day in and day out.

After nine years, the Minutemen fought their way back to the NCAA tournament in 2017 under the leadership of O’Leary. Having joined the staff two years prior, he helped UMass gradually improve. In 2017, the Minutemen ended with a record of 15-4-3.

In the 2017 A-10 tournament, UMass defeated Saint Louis and Fordham, earning a spot in the finals against VCU, winning 3-1 in dominant fashion. The championship game was where the Minutemen allowed their only goal during the entirety of the tournament. Their victory solidified a spot in the NCAA Tournament, but they lost to Colgate, 2-0, failing to move past the first round. O’Leary credits the 2017 team’s mental toughness and physicality throughout the season.

Since then, UMass has had its fair share of ups and downs, with the 2020 fall season being cancelled completely due to the pandemic. Yet, they emerged a stronger team, finishing 7-1-3 overall this season. Its record however did not earn them a spot in the A-10 tournament.

Ranked 22nd in the country according to NCAA men’s soccer RPI, the Minutemen are one of only two teams represented from the A-10 in the top 30. On April 19, the team sat together with their masks on, never taking their eyes off the screen and their ears perked, hoping to hear the team’s name announced.

The moment they were waiting for arrived, and as UMass learned along with the rest of the world, its excitement showed.

At this moment the mental and physical preparation began, wanting to prove to themselves and everyone else that they were capable of dominating. The Minutemen are headed to North Carolina.

When comparing the abilities of the 2017 and 2021 teams, O’Leary feels that they are notably different, but equally as effective. The 2017 team was known to rely more on shutouts, while the current team is more explosive offensively and creates opportunities in the top third of the field.

The 2021 team is currently ranked 10th as a scoring offense in the country with 26 goals and a 2.36 goals per game average.

Because of its explosive offense, UMass has gone toe to toe with opponents like Fordham and Virginia Tech, who will both be making an appearance in the NCAA tournament. Fordham (7-0-2, 3-0-2 A-10) is currently ranked seventh in the RPI and Virginia Tech (6-6-3, 5-5-2 Atlantic Coast Conference) is 25th in the United Soccer Coaches poll.

In the two games that the Rams and Minutemen faced each other, both matches went to double overtime. In their first meeting the Rams won 2-1, while they tied 1-1 in their second go around.

Taking a closer look at the box score of both games one notices UMass had 36 shots compared to Fordham’s 20 shots. UMass being the aggressor in both games, created countless opportunities but only found the back of the net once in each match.

The Virginia Tech game was a chance for an at-large bid spot in the NCAA tournament. O’Leary didn’t change anything going into the match. He believed that his unit had the courage and talent to compete with the best soccer programs out there.

UMass versus Virginia Tech did not disappoint in a double-overtime thriller which saw momentum swing in both directions and ended with a 3-3 draw. The case for an NCAA playoff berth was strengthened with O’Leary and his squad putting up three goals on a top college program.

O’Leary and the Minutemen felt like they had put themselves in the conversation for a spot in the tournament. UMass played closely with Fordham, who led the league and ultimately won the A-10 tournament. They only lost one game and after a season of uncertainty, the team was rewarded.

“Surrounding ourselves with a group of guys that enjoy playing soccer,” O’Leary said. “It’s been a difficult time with COVID, and we’ve maintained our bubble. We’ve maintained our protocols. The guys, like every student on campus both athletes and non-athletes, have made huge sacrifices and I’m just happy they are getting the reward of playing an extra game now.”

UMass was given strict instructions to ensure that it remained safe, knowing that a positive result could alter and potentially end the entire season. The practice field was the only place where the players met face to face, with the weight room and locker room closed.

When beginning his career, O’Leary never imagined the troubles that he and the rest of the sports world would have to face this year. However, he has confronted the issues successfully by using his past experiences.

O’Leary’s head coaching career began in 1989 at Elmira College, where he remained for three years. He then moved to coach at Kenyon College in 1992 to 1993 and during his short time on staff he led them to 32 wins and only four losses.

His first Division I head coaching position began in 1994 at Dartmouth College. Six years later, he served as the head coach at George Mason University and shortly after went to work at Bowdoin College.

During his transition from Division I to Division III, O’Leary did not see a large difference. The key was recruiting committed athletes who arrived ready to play and wanted to win. Size did not matter, as he had experiences at the smaller schools with a group of men who had more depth and stronger abilities.

While at Kenyon and Dartmouth, O’Leary’s teams both advanced to the final four in the NCAA Tournament. He helped motivate his teams by keeping the atmosphere light and ensure that the players are enjoying the games.

O’Leary moved from collegiate soccer to professional, joining the MLS. In 2013, he was made an assistant coach of Toronto FC, and served as the Director of Player Recruitment where he remained for two years.

These recruitment skills remained at the forefront of O’Leary’s mind when he was named the men’s soccer head coach at UMass.

When looking at players, he tells them that under his leadership, they will get better and have fun. However, they must also have the determination to improve themselves and their skills. These attributes can be found in the coaches and players that O’Leary looks to surround himself with.

His relationship with the players spans beyond what is required. O’Leary devotes additional time and efforts to help players who are struggling, whether it is related to soccer or not. As student-athletes, these players have enough pressure on them, and O’Leary does not look to add on to it.

A golden example of how O’Leary put in the work to help his players outside of soccer is captain Yosuke Hanya, who is from Japan and didn’t know any English upon his arrival at UMass. Hanya couldn’t communicate or express himself and was having difficulty adjusting.

O’Leary being from Dublin, Ireland, understood the struggles Hanya was dealing with. To help Hanya, O’Leary created a game that would help him learn English quickly and on a daily occurrence, including a word of the day.

Hanya explained that these games allowed him to feel more comfortable with English, the team, and American culture. He conversed with teammates daily. The UMass captain credited O’Leary as always being a source for motivation and encouragement.

Having had to sit out for the 2019 season due to an injury and then the cancellation because of the pandemic, Hanya’s success this season wouldn’t have been capable without the leadership from O’Leary and the support from his teammates.

“It was tough, it was tough, and it was rough,” Hanya said about his two years of not playing. “But Coach Fran always told me that like I have to be the player who makes something different like who brings something different and also I have to be the one who makes other players and other teammates better so that you know keeps me motivated and that’s really helped me.”

The Minutemen coming back this season to play has been a journey for O’Leary, Hanya and the rest of his team.

At the start of the season, the players were offered an out. O’Leary told them that if the restrictions became too much, they would be allowed to sit out with no repercussions. But no members of the team took him up on this offer, not wanting to lose out on more time away from the sport they loved. They agreed to play and fight for the “COVID Cup,” as O’Leary refers to this season.

The focus is not placed solely on winning. The culture O’Leary builds is full of enjoyment and making sure his players share a love for the game. His passion is apparent as he stands during games, communicating with the players. By demonstrating his commitment, O’Leary leads the team and creates a standard that is followed by the players.

“If it stops being fun. If I stop enjoying coaching and working with young people, then it will be time to stop.”