How Jessica George went from benchwarmer to coach 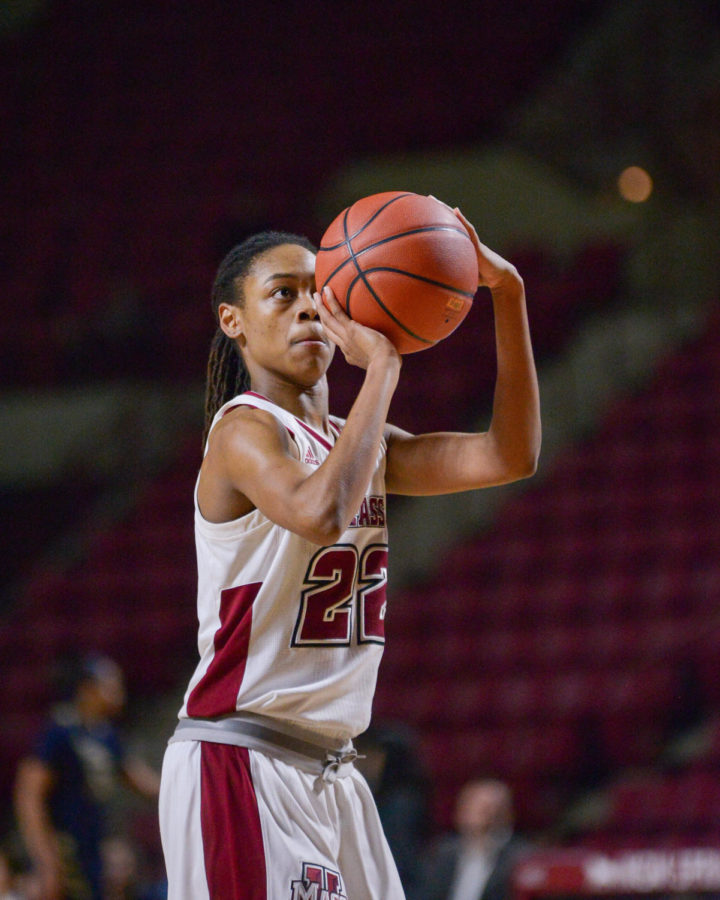 With just 1:14 left in the first round of the 2016 Atlantic 10 Women’s Basketball Championship, then Massachusetts women’s basketball team head coach Jen Macauley turned to freshman guard Jessica George. She called a timeout and sent George with Maggie Mulligan to the scorer’s table. A mere 25 seconds later, George turned the ball over.

Following a self-inflicted turnover by La Salle, the Minutewomen regained possession with under 40 seconds to play. This time, George is rejected on her shot attempt. The clock ticks into the teens as La Salle begins its attack one final time. Micahya Owens, the player who blocked George, loads up for three. No good. It’s desperation time now for the Explorers, as they haul in the offensive board. Owens steps in and heaves a prayer as time expires but misses once again.

Final score: 81-65, UMass. Those were George’s first and only minutes of the night. She wasn’t subbed in to save the game; she was subbed in because it was already over.

It is a trend that the Waldorf, Md. native had become accustomed to by this point. Throughout that year, George had played in just 13 of the Minutewomen’s 30 games. Only once did she see more than five minutes of playing time, in a 26-point thrashing of UMass Lowell.

From Jan. 1 through Feb. 27, George rode pine for every second of UMass’ nine games. She ended her freshman season with four points on one made field goal, one assist and six rebounds.

Verdi was brought in to pilot the team after four years at Eastern Michigan. One of his first orders of business was to hold individual meetings with each player and discuss what he saw in them and their role with the team. When George walked in the office, Verdi didn’t sugarcoat his first impression of the young guard.

“I said to Jess, ‘If playing makes you happy, then we probably need to look for another institution for you to go play at,’” Verdi said in a 2019 player spotlight on George.

That answer wasn’t good enough for George. She refused to transfer and kept putting in the work. Eventually, Verdi saw the type of heart and player he had in her.

By her sophomore year, George was making appearances in all 30 games — a boosted role that would only continue to grow as she developed into an improved player and leader. The first game of the year, a home loss to Buffalo, George played 39 minutes. She played 43 in her entire freshman season combined. It took that one game for George to have more points, field goals, 3-pointers, steals, and assists than her prior career total.

Her scoring averages jumped each year she played, but that wasn’t the cardinal focus for George as she matured on and off the court.

“I really take pride in the difference in my stats from my freshman year to my sophomore year, and even outside of stats,” George said. “I can definitely say that I became more of a leader, more of a talker, not just kind of standing behind the scenes but instead taking action and not being afraid to make mistakes.”

With the inception of the Verdi era came just four out of nine eligible players returning. Only two were starters the year prior. The 2016-17 squad ended up having 10 members, six being freshman or sophomores.

One of the new faces was Hailey Leidel, who is now playing professionally in Greece. Leidel, 23, was recruited by Verdi while he was still at Eastern Michigan. She was also recruited by Jen Macauley, his Massachusetts predecessor. When Verdi wound up at UMass it was a perfect storm for Leidel.

“I actually really enjoyed getting to know him and his program at Eastern [Michigan], so I was super excited when he got the job at UMass,” she said. “He was trying to get out the people that didn’t fit the culture he was trying to build from the jump. You don’t want people that aren’t invested.”

As a senior, George co-captained the Minutewomen with Leidel. Leidel was also a captain her sophomore year and confirmed that George brought more of a vocalized leadership to the mix. She always struggled calling out mistakes by teammates, but George didn’t hold back.

“When Jess became captain, it was perfect because Jess will say whatever,” Leidel said. “We just fit perfect because we would both lead by example…but she really helped me learn how to speak up.”

This wasn’t always a strong suit for George either. Even when she won a state championship her sophomore year of high school, North Point head coach Mike Serpone remembered how she was more reserved, on a star-studded roster featuring multiple future Division I athletes. He described her as one of the players that led by example. Serpone said George wasn’t one to ever come after teammates, and instead let the work do the talking.

Regardless of George being expressive or reserved, her dedication to being involved and her unabated work ethic are what makes her stand out. As a high schooler, George volunteered at the largest girls’ basketball camp in Maryland. She was present for many youth camps and had a palpable passion and appreciation for teaching.

Serpone said she’s “one of those kids that everybody likes.” Leidel referred to her as “one of the sweetest, kindest people ever.”

That concoction of assets is what made the decision to hire George as an assistant a “no-brainer” for Verdi. He said she stands for everything that he wants the program to be about and does all the right things on and off the court. Her perspective and ability to help current players as a former member is invaluable to Verdi.

Before George was hired in September of 2020, she was working at Finish Line in her hometown of Waldorf, Md, an appropriate job for a sneakerhead like George, who owns over 30 pairs of kicks. There was an opening on the coaching staff after Brandon Jackson moved on following his four-year stint as the director of video operations. George, always having a desire to get into coaching, ran the idea past her parents and moved back expeditiously.

“When I was playing, I always told myself that if something ever happened where I wouldn’t be able to play anymore, I would always still want to be surrounded by the game because I love basketball,” George said. “[Coaching has] definitely always been on my mind.”

Since then, George has been using her experience as a smart, talented player to be the team’s director of scouting and video operations. But sometimes, her responsibilities transcend the job description.

In practice, George is inserted as a practice player. During games, she hopelessly wishes to suit up again and give her team a boost on the court. Her presence would be especially welcomed by the Minutewomen during the recent conference tournament and WNIT runs, when they were reduced to just seven players.

George also fulfills her more conventional duties. She helps with film, organizes photoshops for players and recruits and uploads to the highlight and analytical holy grail for basketball addicts: Synergy.

The Swiss Army Knife nature that George carries is part of what makes her such a valuable hire for UMass. There was even an earlier point when she was in talks with Serpone about an offer to come coach at her old high school.

Now, George is anything but flying under the radar. She has spent years building a reputation as a reliable, worthy leader. She’s someone Verdi can lean on and trust to go above and beyond.

“To have her here and her work ethic is just like it was when she was a player, just grinding each and every single day,” he said. “I never have to ask for anything twice, everything is done. It’s meticulous, and that’s why she’s a part of our program.”