Photos and reactions from students on the night 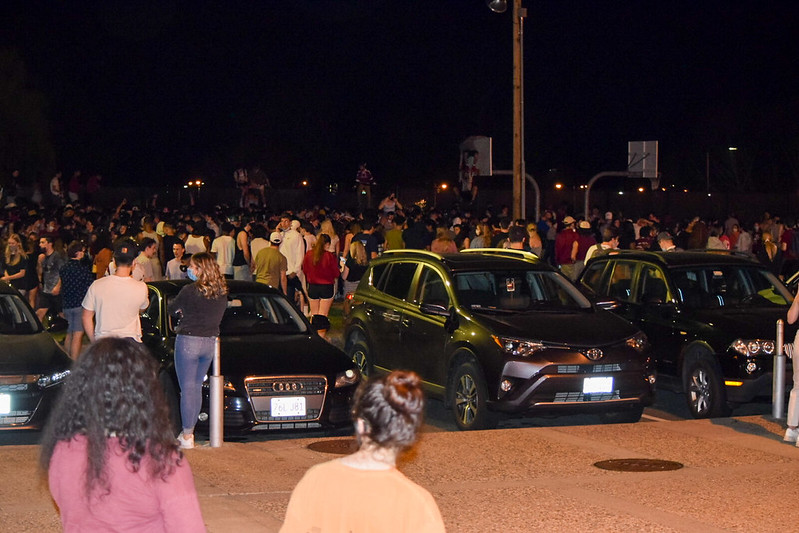 By McKenna Premus and Cassie McGrath

“It feels like you’re a part of something,” freshman Raj Patel said. “Especially with the virus and the way things have been going. I don’t even watch hockey. I don’t like it. I can’t see the puck, I don’t know what they’re doing, but I thought it was cool.”

Daily Collegian reporters asked for a comment from a student walking through campus in a group. “People are definitely not being safe with COVID, but I think people were out of element because it was such a big deal, first thing in history,” said a student who identified as a freshman living in Southwest. “I mean, everyone was wearing masks for the most part, so that’s nice, but obviously there’s way too many people here for that. I think everyone got overly excited because everyone here is freshmen.”

Some students told Daily Collegian reporters that they weren’t worried about COVID-19. One student said, “I already had it” while another said they were fully vaccinated. Another student, who identified as a UMass freshman living in Orchard Hill told reporters, “I mean COVID is still definitely an issue, honestly I’m not even worried about getting it… I mean it is what it is.”

There was a police presence at the gathering at the Southwest basketball court. Officers and cadets in the area declined to comment.

“It’s definitely interesting, because we’re all freshmen and we’ve never seen something like this. This is the most people we’ve seen in a group in so long,” a UMass student told Daily Collegian reporters. The student said they were a freshman living in Orchard Hill.

Following the gathering at the basketball court, some students walked around picking up trash.

“It’s the beginning of a legacy,” Patel said.