The Minutewomen seize a victory over Duquesne, 21-4. 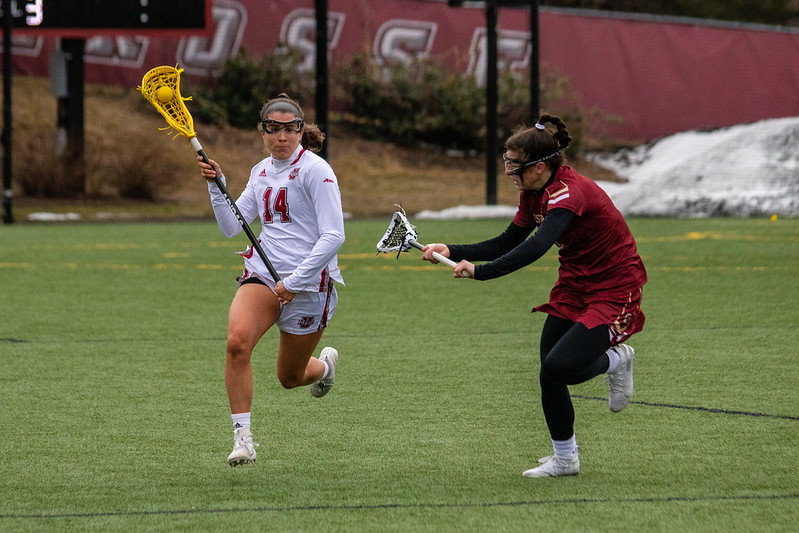 The Massachusetts women’s lacrosse team prevailed over Duquesne on Thursday, 21-4. This marks the third time in nine games the Minutewomen have scored 20 or more goals in a game.

“We had an aggressive mentality in today’s game and were consistent throughout the entirety of the game,” said UMass head coach Angela McMahon said postgame. “Today was one of our more consistent games and this will be goal of games moving forward as well as aggressive attacking.”

To open the first half, midfielder Haley Connaughton scored the Minutewomen’s (7-2, 2-0 Atlantic 10) first goal. With just five minutes played in the first, Connaughton, Stephanie Croke and Olivia Muscella all scored and led the Dukes (2-1, 1-1 A-10) 4-0.

“Everyone stepped up today and ultimately all games begin with draw control,” McMahon said of her team’s efforts. “Getting possessions early enough helped us on the 4-0 run in the first half. Caitlyn Petro did great, the defense was amazing, and offense pushed the ball. Our defense really dictated the play, we forced Duquesne into an uncomfortable position. Everybody had a hand into today’s win.”

Both teams battled for possession, but UMass quelled the Dukes offensively. Attacker Kaitlyn Cerasi was able to sneak past Duquesne’s defense and scored two consecutive goals for the Minutewomen. With nine minutes left in the first half, Alex Finn scored UMass’ 14th goal of the game, handling the Dukes 14-1. By the end of the first, Duquesne added one more goal off a free position shot, closing out the half down 15-2.

UMass went eight-for-eight in clears in the first, goalie Lauren Hiller had four saves as well. The Minutewomen tripled the number of shots on goal compared to the Dukes in the first half. The offensive explosion of UMass translated to 10 straight unanswered goals in the first, Connaughton led with four goals to complete the half.

“Today was about our speed, winning draw controls and using speed on transitions,” McMahon said. “We have some really fast players, and they know how to use their speed. Our defensive pressure gave us the ball back to push the pressure on offense. We really try to push the pace of play and this ignited us and transitioned into a lot of goals.”

The Minutewomen’s win over the Dukes was not the only success they had today. Notably, UMass led Duquesne in statistics, with 12 more assists, 18 more shots and 20 more shots on goal than its opponent. This game was a season-best for the Minutewomen, as they deadlocked the Dukes allowing only four goals.

Looking to improve the winning streak to seven, UMass is on the road to Olean this Saturday, where it will face A-10 opponent Saint Bonaventure.

“Honestly we take it game by game and right now we are focused on Saint Bonaventure,” McMahon said of UMass’ next opponent. “This is a tough week of traveling, we need to stay focused, rested and hydrated. Travelling can be difficult but we make it work and are ready for Saturday’s game.”