UMass faces decision of the season heading into title game: Who starts in net? 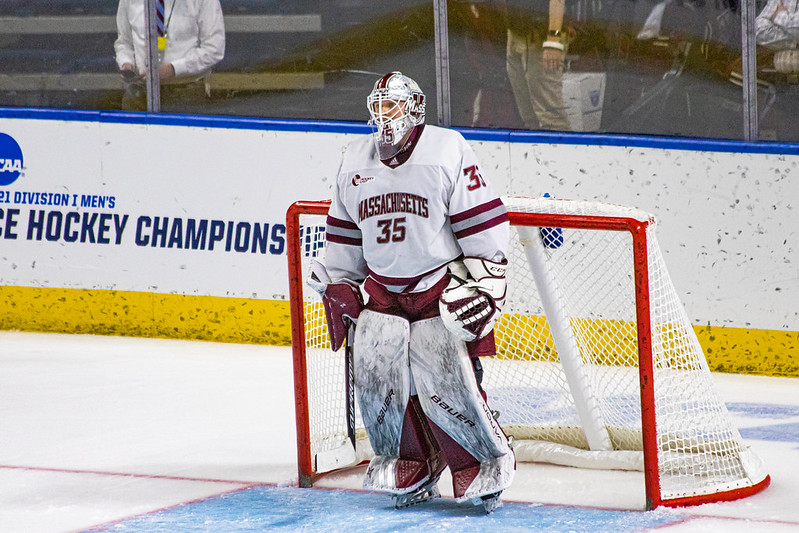 Death, taxes and the Massachusetts hockey team has a tough decision to make when it comes to who starts in net.

Stop me if you’ve heard this song and dance before.

For the better part of three years, Filip Lindberg and Matt Murray have battled it out for the UMass (19-5-4, 13-5-4 Hockey East) net. After a year of splitting in 2018-19, Murray began as the starter, but after half a game was replaced by Lindberg who brought the Minutemen all the way to the national championship game. They split again in 2019-20. COVID-19 ended any chances of a playoff starter being named.

This year was supposed to be different, and for most of the year it was. Lindberg went to Carvel last summer wanting to play more. Carvel got mad at him.

“Then be better,” Carvel said to Lindberg at the time. “I know Matt’s a good goalie, but you want to play more, be better than him.” The Minutemen’s bench boss shared the same message with Murray.

When Lindberg went down with an injury early in the season, Murray carried the torch. He rattled off seven straight wins. After two losses to Boston University, Lindberg was back and went on a tear, going onto lead the nation in save percentage (.946) and goals against average (1.33).

Going into the NCAA tournament, the decision was once again clear – Lindberg would start. UMass won its first two games at regionals.

Then the news dropped last week that Lindberg, along with Carson Gicewicz, Jerry Harding and Henry Graham, would be staying home and unavailable for the game against Minnesota Duluth due to COVID-19 protocol.

Back went Murray into the net. His 36 saves, 34 of which came in regulation, carried the Minutemen past the Bulldogs and into the national championship. Time and time again, Murray bailed UMass out Thursday night, most noticeably when he made a huge, left pad stop on Nick Swaney to begin the third period and prevent the Bulldogs from going up 3-1.

“We’re super happy for Matt,” UMass assistant coach and goalie guru Jared DeMichiel said to the Daily Collegian Friday morning. “He’s been a very important player for our program here for the last four years and he’s had to deal with competition in the net…He handled the situation last night like a vet, like a mature person and super, super proud of him and his efforts.”

It was announced moments after Garrett Wait’s OT-winner that Lindberg, along with Gicewicz and Graham, would be returning to Pittsburgh.

And UMass was back to having a big decision to make in net.

No matter who starts, both have a strong case for it. Lindberg has been college hockey’s best puck-stopper for over two months; Murray stood on his head to get UMass to the national title game. Murray’s also the winningest goalie in program history.

Since Lindberg didn’t actually have COVID-19, he’s still been able to skate in Amherst. Lack of pucks faced in the past week won’t be a problem.

“I’ve talked to him every single day,” DeMichiel said of speaking with Lindberg. “Our staff has had conversations with all the guys there on campus. They seem like they’re in game-ready spirits and they’re super excited to get here [to Pittsburgh].”

The UMass coaching staff met after their squad’s thrilling win over the Bulldogs to discuss who the starter should be. They met again after they woke up. The decision has already been made.

“We wanted to sleep on it,” DeMichiel said. “Really, when we have two goalies, Filip Lindberg and Matt Murray, every single game that one of them does not play is a very difficult decision. We are extremely lucky that we feel like we have two No. 1 goalies.

“You’ll have to see who comes out and starts between the pipes tomorrow night.”

Carvel also kept his lips sealed on who the starter would be. Anyone who knows UMass knows it’s easier to get a bill through Congress than it is to get word of the starting goalie prior to game time.

It’s a decision with huge implications. To pick a starter for a mid-January game against Merrimack is one thing. To pick a starter for the national championship against St. Cloud State (20-10, 15-9 National Collegiate Hockey Conference) is 100 levels above that. It’s the type of decision UMass faithful will question for years after if Saturday night doesn’t go according to plan.