With 12-11 loss to Pride, Minutemen fall to 3-3 and drop their second-straight game 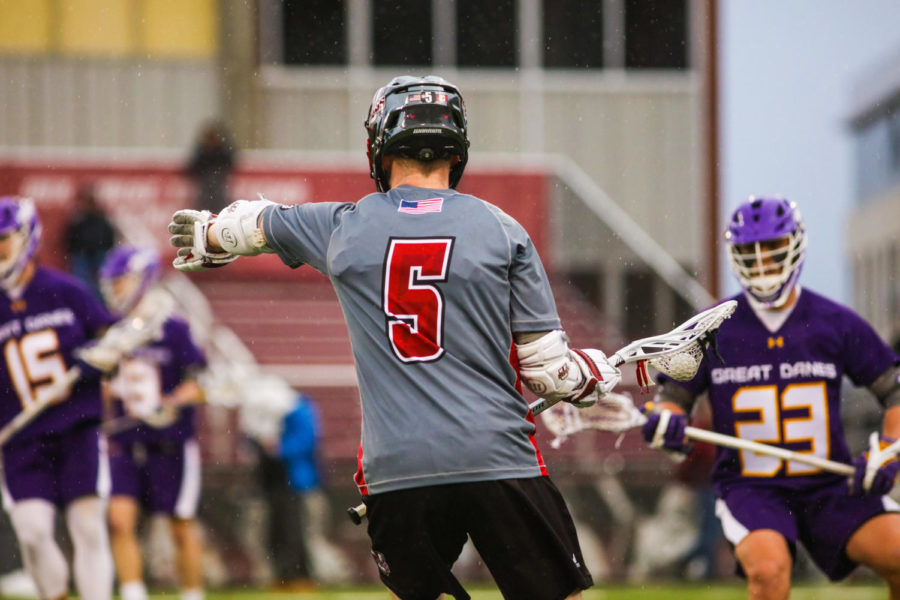 The Massachusetts men’s lacrosse team came into Friday’s contest against the 18th-ranked Hofstra Pride looking to take its second victory of the season from its CAA rivals, after winning the first meeting between these two teams in Long Island, 16-10. However, when these two teams matched up at Garber Field on Friday, it was the Pride (6-2, 3-1 Colonial Athletic Association) who came out on top.

The Minutemen (3-3, 3-2 CAA) came into the matchup after a tough three-game road trip where they dropped games at Albany and Drexel, both by only one goal. Going to Garber Field, where the Minutemen had been undefeated so far this year, there was reason to believe that this tough stretch would end for them.

However, Hofstra had its own motivation for this one, looking to avenge its home loss to the Minutemen from 10 days prior. The result of these clashing motivations resulted in an extremely fast-paced first half where both teams brought tremendous energy.

“When you play a team twice, that quickly, in the span of 10 days it’s pretty fresh in their memory, what happened at their place,” Cannella said. “They came in focused, and they came in pissed off.”

Early on, the effort was clearly present from both teams, but the execution by the Minutemen led them to an early lead, which grew to 6-2 by early in the second quarter. The lead was sparked by Kevin Tobin, who had a hat trick by early in the second quarter, and freshman Dillon Arrant, who continued his excellent year with two first quarter goals.

The Minutemen maintained this lead through most of the first half, due to continued offensive execution and excellent defense and goaltending. However, the tide began to turn at the end of the second quarter, when Hofstra star Ryan Tierney added two late goals to cut the UMass lead to 8-6 going into half time.

Limiting Tierney, who came into today’s contest with 31 goals and 11 assists in seven games, was crucial for the UMass defense in their previous victory against Hofstra. They held him to a season low two points in that game, but in Friday’s game he made his impact, ending the day with six points.

“I didn’t think we were going to hold him to two goals, two points, like we did in the first game,” Coach Cannella said of the Hofstra star. “He’s too good of a player. He’s, in my opinion, one of the best players in the country.”

“You can’t foul that many times against such a good extra man team,” Cannella said, emphasizing that these penalties were crucial to swinging momentum in Hofstra’s favor.

Goals by veteran leaders Kevin Tobin and Billy Philpott gave the Gorillas the lead early in the fourth quarter 10-9. But after yet another man-up goal by the Pride, this one completing a hat trick for Jackson Forte, and two goals from Justin Lynskey, the Pride had a lead that they would not lose the rest of the way.

The Minutemen, much like in their previous contest against Drexel, refused to give up in this game, scoring with under a minute to go, then drawing two penalties to get a 6 on 4 advantage with just seconds to play. UMass could not capitalize on this late opportunity to tie, with a Minuteman pass going wide to seal a Hofstra victory, 12-11.

Despite the second straight loss, there were positive takeaways from this contest for the Gorillas. They held a very explosive Hofstra offense—who were averaging over 14 and a half goals a game coming into this one—to only eight six on six goals, and the goaltending of sophomore Matt Knote continued to be a highlight. He made 13 saves including an impressive sequence in the fourth quarter.

Canella highlighted that although executing down the stretch could be improved for the Minutemen, he has been impressed with the energy and effort his players have given, saying, “[We are] disappointed but not discouraged, because the effort’s there, we’ve given great effort for most of the games, all six that we’ve played in.”

The Gorillas will hope to end their two-game skid when they return to Garber Field on Saturday, April 17 at 1 p.m. to meet CAA foe Towson.