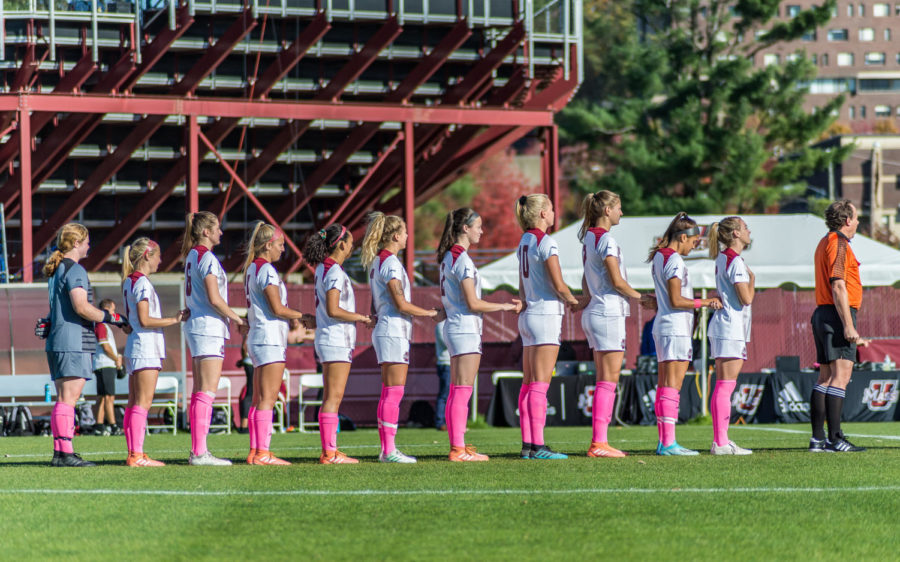 In what can only be described as a season like no other, the Massachusetts women’s soccer team will return to the Atlantic 10 Tournament. COVID-19 has impacted both players and coaches alike from travel restrictions down to limited time for teams to prepare for games. UMass (6-4-1, 5-2-1 A-10) however, stayed true to its form from last season winning nearly 69 percent of its conference games in a condensed spring season that brimmed with regulations.

“We had a lot of injuries, a COVID pause, a player got COVID as well, so we had UMass’ COVID policy and then we had an issue with about five of our players causing some of them to miss three games, some of them four games,” head coach Jason Dowiak said. “Being able to feel good about the physical development and progress of the group is something we’ve been extremely uncertain about. The most difficult thing was figuring out how we get the group fit and match ready.”

The A-10 conference itself had to divide itself into four pods where each University would face each team in its respective pod twice, along with however many out of conference games each team could schedule before conference play began. The winner of each of the four pods advances to the A-10 semi-finals where none of the teams have faced one another this season another prior to the shortened tournament.

“Having a different type of season where you have to reprepare for the same opponent in our pod is tough,” Dowiak said. “I felt like that is another area where I’m really proud of our staff and players to be able to make adjustments a week or two before we saw a team again.”

The Minutewomen won their pod, the A-10 North, and have now reached the A-10 Tournament all three consecutive years under Dowiak, who began coaching at the program in the fall of 2018. After losing key offensive players in Melissa Kossler and Sini Laaksonen in the offseason, along with missing last season’s top goal scorer Lauren Bonavita for the majority of this season due to a knee injury, Dowiak had to deal with more than COVID to make sure his side continued to excel.

This forced UMass to rely on both its senior captains and offseason acquisitions and recruits to step up to the plate when the time came.

“When we haven’t known where it’s going to come from, somebody different has stepped up every game,” Dowiak said. “It’s been somebody else stepping up and as a staff we knew last year’s goals were coming and this year we were a defensively stout team but had the same confidence we were going to get a goal when we needed to.”

Without the onslaught of offensive weapons that the Minutewomen had in their 2019 campaign, UMass made sure to have a strong back line that could withstand anyone in the conference. Senior captain Dani Sclafani has been a facilitator for the Minutewomen’s hardwearing defense that has held UMass opponents to only eight goals on the year.

“I know last season we gave up a lot of goals, but we were playing with three in the back which was kind of tough,” Sclafani said. “Now that we’re playing with four, I feel like we’ve been able to create a really strong foundation. I know one of the things Jason [Dowiak] has stressed is not giving up as many goals and I know one thing about our back line is that there’s this culture of doing literally whatever is possible to support the person who’s next to you and I think that’s the part that makes us so successful.”

The Minutewomen are set to face Davidson, the A-10 South winner, who has shown time and again that they can be a legitimate threat to all A-10 opponents. Dowiak however sees many similarities between the Wildcats (6-3-3, 4-2-2 A-10) and Fordham, a team UMass faced twice this year.

“The way that they [Davidson] play and the way Fordham have played is very similar,” Dowiak said. “Our approach for the Fordham game, which we felt very good about, we’re able to go into the Davidson with a continuation of that preparation. They’re not a high pressing team but we’re prepared for them to do that because they’ve done it against some opponents. I think they’re technically sound and defensively organized but I think if we play similar to how we did against Fordham and continue to create chances I think we will keep ourselves in a position to get a positive result.”

The Minutewomen have been injury riddled since the preseason, failing to have their anticipated starting 11 squad play together in any game this season. However, for the first time, Dowiak feels that his team is in a position where they can play their best players in each position and be at their strongest heading into Thursday’s semifinal.

“It’s been exciting this week getting ready for the semi-final,” Dowiak said. “We have everybody healthy and everybody ready to go and we feel good about this level of the group. I think we’re going to see a slightly different lineup that we haven’t been able to put on the field together as a starting group but a lineup that we anticipated at the beginning of the year being what we thought our best group would look like.”

Sclafani is one of the few players that kept a clean bill of health during the regular season playing every minute of UMass’ 11 games, including three games that reached overtime.

“At the beginning it was really tough,” Sclafani said. “After our first game against St. John’s I walked off the field and was like, ‘oh my goodness my body hasn’t felt this sore in so long.’ Our trainers have made sure they’ve taken care of any nicks or bruises and have us hydrate and eat the right foods and do all of that stuff to make sure that your body can recover for the next game.”

One of the players fully returning from injury is Fatou Barry, the defender turned forward who has provided a spark on the Minutewomen’s offense throughout the course of the season. With a nagging injury that has cost her crucial playing time in the back half of the season, Barry is ready to make her full return against Davidson.

“It was a hamstring injury that I’ve been dealing with the past three years of my collegiate career,” Barry said. “It’s one of those things that some days you feel good, some days you don’t. Fortunately, I am feeling a lot better. I missed five weeks of the season, but I feel like I am ready for the most important part of the season and I can’t thank the UMass athletic staff enough for supporting me along the way.”

During practice this week, UMass spent a lot of time in front of the net, executing a wide variety of attacks in preparation for a Davidson side that, similarly to the Minutewomen, has only conceded eight goals on the year.

“We’ve been focusing on building and keeping the ball,” Barry said. “A lot of possession and formation work. We’ll do some passing patterns to goal and get many repetitions of just getting the ball wide and getting some crosses in, getting some shots up, and working on the relationship between the forwards and midfielders by keeping the ball while still looking to score.”

The tournament is set to be held in Saint Louis after the No. 1 seed Billikens (13-1, 8-0 A-10) earned themselves home field advantage and host throughout the entirety of the postseason. UMass is set to face the Wildcats on Thursday, April 15 at Hermann Stadium with kickoff scheduled for 5 p.m.