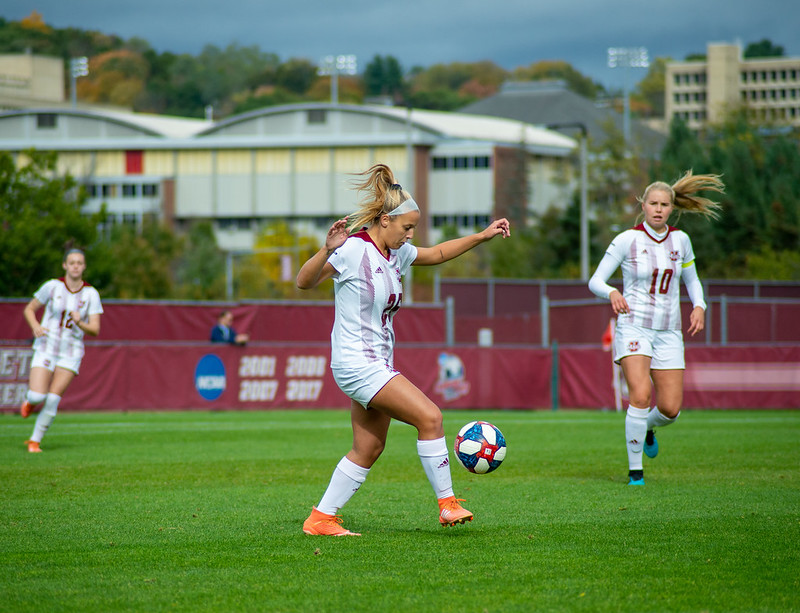 UMass (6-4-1, 5-2-1 Atlantic 10) controlled play throughout most of the game, generating multiple opportunities and shots. Fordham’s defense was able to clear the ball and keeping the game scoreless until the 77th minute.

“I think that was the most complete game that we played,” Minutewomen head coach Jason Dowiak said. “I think what was most impressive about our possession was our players movement off the ball to actually be able to find pockets to advance the ball up field.”

With three defenders on her, Jenny Hipp was able to cut the ball, getting a shot off. The ball sailed past the hands of the Rams (4-3-1, 4-3-0 A-10) goalkeeper, Maria O’Sullivan, finding the top left corner of the net.

“Jenny is the player we want to find in those situations as often as we can and her individual skill to avoid pressure, to turn out of pressure as it was coming,” Dowiak said. “It was truly a beautiful finish.”

Hipp’s presence on the field Sunday afternoon was unmatched as she dominated in the midfield, setting up plays and finding open teammates. She also generated four shots for UMass, two of which were on goal.

Lauren Smida also came up big for the Minutewomen, assisting on Hipp’s goal and totaling two shots on goal. UMass showed determination, with every player stepping up and helping generate opportunities and defend the lead.

“Fordham has been a very organized, very difficult team to break down,” Dowiak said. “Our players just played with a tremendous amount of composure and confidence in possession to want to advance it.”

Alyssa Chase began in goal for UMass but did not face any shots from Fordham’s front line. In the second half, Bella Mendoza started and saved the Rams’ lone shot on goal. Dani Sclafani and Fiona Kane have been the UMass center backs this entire season and have helped prevent many dangerous opportunities.

“Both Alyssa and Bella had to come up big in moments and Dani and Fiona had amazing games again,” Dowiak said. “Our sixth shutout of the season when we’ve played so few games this year, I think that says so much.”

Saturday afternoon’s game was also a celebration for the seniors who have had their seasons disrupted due to the pandemic. Captains Fatou Berry and Sclafani were honored along with Chase, Hipp, Nissa Pereira, Kelly Marra, Mollie Williams and Megan White.

“There was a lot of emotion that went behind the game today, it was Senior Day so that was part of it,” Dowiak said. “Allowing us the possibility to play on our game field, on our home field, for their last home game as Minutewomen, it’s like a Disney movie.”

UMass now leads the Women’s Soccer North division in the Atlantic 10 conference, solidifying a spot in the conference tournament. The tournament is set to begin on Thursday April 15 and will air live on ESPN+.