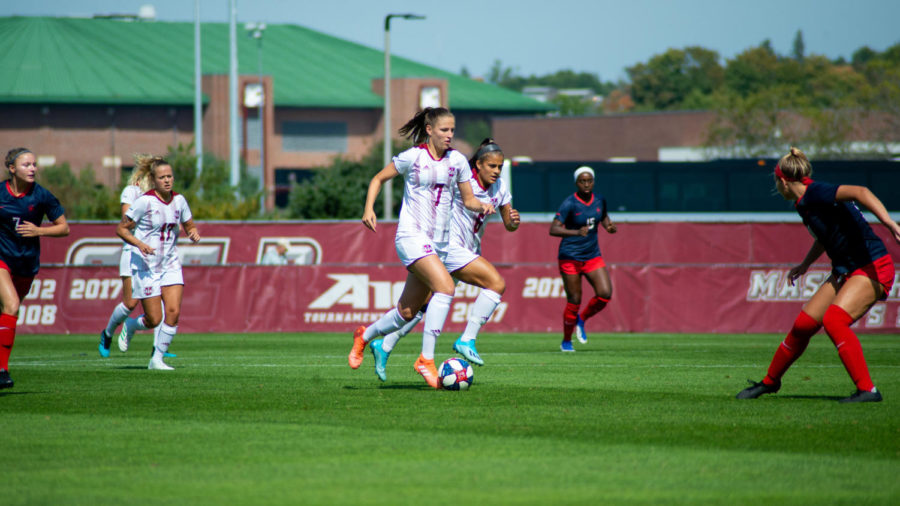 It was a battle in the midfield, as the Massachusetts women’s soccer team struggled to generate opportunities offensively.

UMass’ (5-3-1, 4-1-1 Atlantic 10) Ella Curry provided the team with its best opportunity in the seventh minute, but the shot was deflected off the cross bar. The game remained scoreless throughout the first half, but Saint Joseph’s Izzy Greene scored the winning goal in the 62nd minute.

The Minutewomen played with urgency in the final minutes of the game, but any shots taken were blocked, saved or went wide. Dani Sclafani, who has been a defensive force this season, pushed forward and helped create chances offensively.

“[Dani Sclafani] started advancing into the midfield and even higher and they couldn’t stop her,” Dowiak said. “I thought she was going to dribble through everybody at one point and put it away herself.”

The defense has been a constant throughout this season, with Sclafani and Fiona Kane at center back. Goalkeepers Alyssa Chase and Bella Mendoza have split time many games, both making crucial saves and playing off their line to help clear the ball.

This is the second meeting between UMass and Saint Joseph’s this season. The Hawk’s victory gave the Minutewomen their first loss in conference play.

“They were a bit tougher to break down this time around,” Dowiak said. “They made some adjustments between tonight and the last time we played, last week.”

Ava Jouvenel returned to the lineup after missing two games and Mia Carazza saw her first minutes of the season, coming in during the first half.

“We’ve got to get our kids healthy and recovered,” Dowiak said. “Getting everybody healthy, fit, back in the mix has been great and now we’re starting to see the relationships really start to form too.”

Captain Fatou Berry has been sidelined since early March, having injured her hamstring in the game against UMass Lowell. She has only played in two full games this season and has recorded one goal and one assist.

“We’re finally just getting through the last protocol steps and her [Fatou Berry] final appointments to be given the all clear,” Dowiak said. “She’s been able to do a lot more in training these last four or five days.”

There are just two games remaining in UMass’ regular season before postseason play begins. In conference play, the Minutewomen have only given up two goals across six games.

“We haven’t given up a lot and we learn from it,” Dowiak said. “I’d rather it happen now than in two weeks when we’re hopefully playing in postseason play.”

UMass will take on La Salle on Saturday. The game is set to begin at 6 p.m. and will be broadcast on ESPN+.

Sophie Weller can be reached at [email protected] She can be followed on Twitter @sophieewellerr.