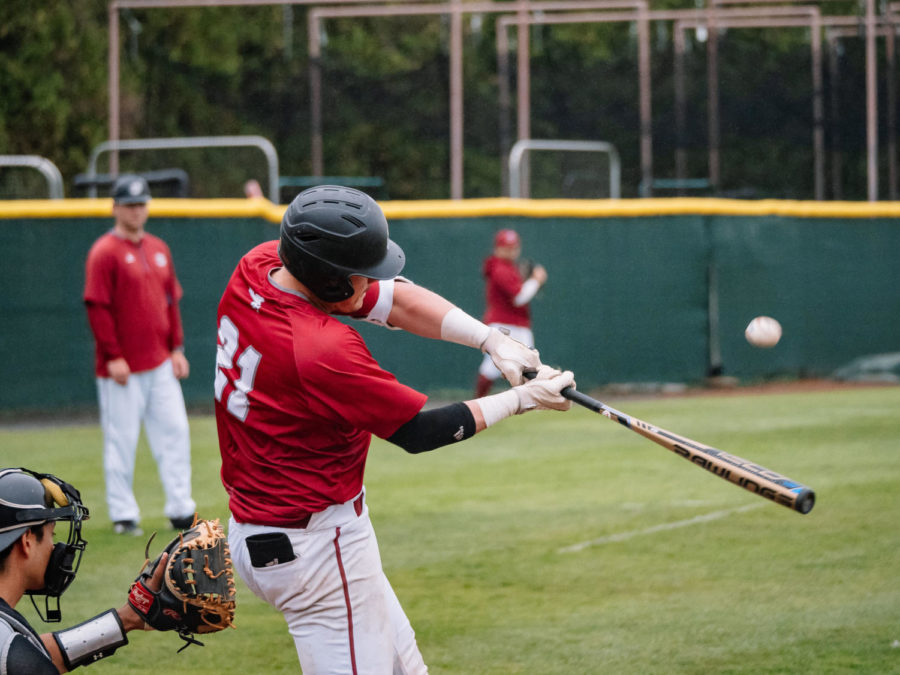 On a rainy, overcast afternoon the Massachusetts baseball team appeared to have secured a win against the Holy Cross Crusaders, taking a 6-5 lead into the top of the ninth inning.

Holy Cross’s right fielder, Peter Dudunakis, got to UMass (7-9) closer Jack Pawloski quickly with a leadoff double. The ensuing at bat, Pawloski had a pitch get away from him that hit Holy Cross’ (1-7, 0-5 Patriot League) Cam Meyer. With men on first and second Holy Cross executed a double steal to perfection that put runners on second and third with no outs.

After Pawloski picked up a strike out, Holy Cross laid down a sacrifice bunt that UMass first basemen Steven Luttazi was unable to cleanly field. The error by Luttazi allowed for Holy to even the score at six apiece.

“The safety squeeze we knew that was coming, we had it played perfectly but we just didn’t make the play,” said Head Coach Matt Reynolds postgame. “We expect make that safety squeeze play especially when we know it’s coming.”

Holy Cross attempted a sacrifice bunt again, but the Minutemen were ready for it. With two outs on the board, the Minutemen had an opportunity to get out of the inning as Holy Cross hit a grounder to third basemen Aidan Wilde. Wilde’s throw lifted Luttazi’s foot off of first base and allowed for Holy Cross to take a 7-6 lead.

“Aidan (Wilde) made a good glove play on it, he didn’t get a grip right away,” Reynolds said. “He then regripped and made a throw and I don’t know if it was him or Steve (Luttazi)… but it just pulled (Luttazi) off the bag ever so slightly.”

UMass had a chance in the bottom of the ninth to respond with a runner on, as with two outs catcher Mike Gervasi stepped to the plate. Gervasi was certainly the right man to have at bat in this situation as he had an excellent day at the plate going 3-for-5 with a double and three RBI. However, Gervasi couldn’t come through in the clutch and struck out looking on a breaking ball.

“Obviously you don’t want to go down looking,” Reynolds said. “We went down looking and so did Holy Cross more than anyone would have liked. It was what you could call a generous pitchers’ zone today to be very kind, but we knew that going in. We had the same umpire last Wednesday and we knew it was a very, very, very big zone and we have to adjust to it, there’s nothing we can do about it.”

Despite the loss UMass had success at the plate, hitting two home runs off of Holy Cross. Designated hitter Dylan Judd hit a two-run shot to left center in the fourth and shortstop Chris Pearsons hit a pivotal homer in the bottom of the eight, that at the time was the go-ahead run.

The UMass pitching staff also turned in a solid performance collectively only giving up four hits to the Crusaders. Although lefty Kevin Dow gave up four runs in 3.1 innings, the southpaw struck out seven while only giving up one hit.

The rainy weather could have affected the Minutemen in the field as they committed four errors on the day.

The Minutemen have now lost their last four games and will have a chance to get back in the win column on the road against UConn on Friday.