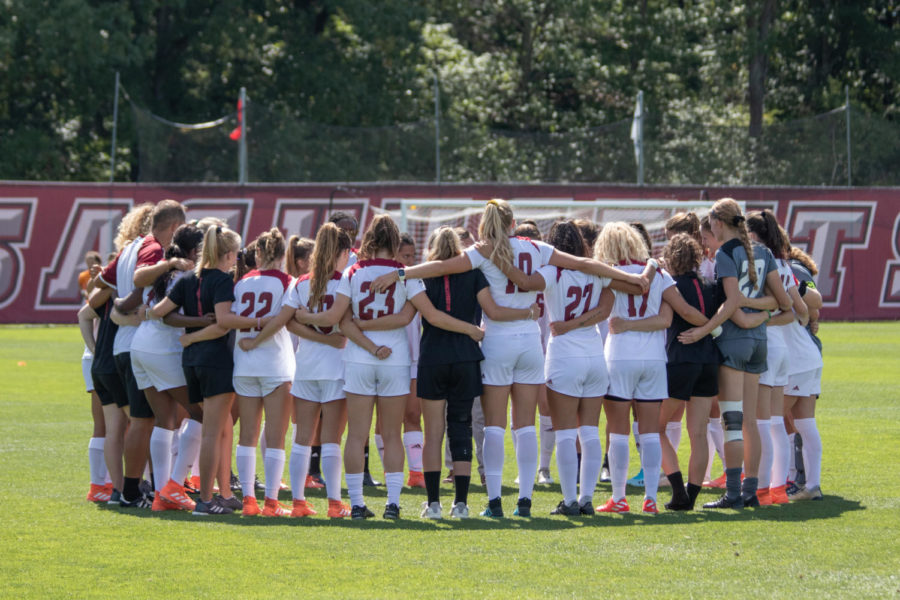 That is what defined the season for the Massachusetts women’s soccer team this spring. Players stepped on the field prepared to give it their all and eager to get the win, not just for themselves, but for one another.

The regular season was supposed to begin on Feb. 14, but a rise in COVID-19 cases forced athletics to pause. After four games were cancelled, UMass (6-5-1, 5-2-1 A-10) took the field for the first time in over a year on Feb. 28. Thus, the start of the season and the chance for a spot in the Atlantic 10 Tournament began.

“We talked a lot about, over the course of this past year, just be ready for things to change,” head coach Jason Dowiak said. “Because that’s the only certainty that we have, that something is going to change again, whether it means a positive change or another frustrating one.”

Throughout the season, the Minutewomen focused on new things every week, many of them not related to soccer. With a predominantly younger team, the importance of team togetherness and bonding was stressed. Dowiak credits his team’s success this season to not allowing little or big things phase them and effect the level of play.

In the season opener, St. John’s had already played two games in its season and controlled possession throughout most of the game. In the 66th minute, an unfortunate penalty in the box allowed the Red Storm (5-4-3, 2-4-3 Big East) to take the lead and win the game.

Yet, the Minutewomen did not allow this to get them down and they defeated Stony Brook a few days later. After a tough first half, UMass took the field with senior captain Fatou Barry playing an important role in the win. Early in the second she scored early with a one touch shot and got the assist. Freshman Ella Curry recorded her first collegiate goal.

Coming off a successful game, Barry was injured in the early minutes of the game against UMass Lowell. In the 74th minute, the River Hawks (5-2-1, 4-0-0 American East) struck first, followed by two more goals just four minutes later. With minimal offensive opportunities, the Minutewomen were unable to come from behind, losing their second of three games in the season.

After beginning A-10 play, the Minutewomen saw a change in their play and began to dominate offensively. A draw against Rhode Island was just the start, with a five-game winning streak to follow. More players were being rotated into the lineup as well.

“We were starting up to either freshman and sophomores in a lot of those games in the middle part of the season,” Dowiak said. “There was that big time learning curve for a lot of those younger players.”

With many players sidelined with injuries, many of the younger players saw time on the field and made a difference. Freshman goalie Bella Mendoza began to split time with Alyssa Chase, and eventually earned the starting role in the playoffs.

A new theme also began to take form, with many of the goals being scored late into the game. In the victory over La Salle, Hannah Peric found the back of the net in the 90th minute. After a competitive 106 minutes of action, a header by Lauren Bonavita in double-overtime lifted them above Fordham.

The winning streak was snapped in UMass’ loss to Saint Joseph, followed by a loss to La Salle. However, in its final game of the season, UMass was victorious and punched its ticket to the A-10 Tournament for the third year in a row.

“To finish second for the first time in a really long-time and to put ourselves into our third consecutive A-10 Tournament, I’m blown away by their resiliency and by their ability to focus in and find the new way to compete,” Dowiak said.

Davidson came out ready to play and a breakdown on defense left the Minutewomen in need of an equalizer within 30 seconds of the game. Multiple opportunities and shots were taken, but nothing was able to pass the Wildcat’s (7-4-3, 4-2-2 A-10) goalkeeper.

With only a short break before the new seasons begins in the fall, the Minutewomen will spend their summer preparing.

“I know we will, as a staff, spend more time preparing more tactical information to present to them during the summer,” Dowiak said. “We know we can be a very good attacking team because we scored a boat load of goals in our first two seasons.”

With the focus being mainly on defense this year, UMass will continue to improve on its offensive opportunities. Senior captain Dani Sclafani will not be on the team, but the leadership in the back will remain with Fiona Kane and Bella Mendoza. The true test for the Minutewomen in the fall season will be converting from the midfield to the top third and finding the back of the net.