A trial in adulthood, air quality and NASA

“Air quality got worse right away, I think this was the week before school started, I don’t know if you heard, but the end of August the whole world turned red for us here” 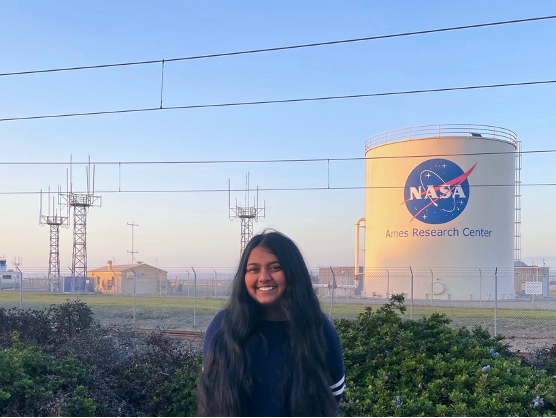 “Air quality got worse right away, I think this was the week before school started, I don’t know if you heard, but the end of August the whole world turned red for us here.”

On the United States’ west coast, COVID-19 wasn’t the only threat in the air as the fall academic semester began. Early in August, California was engulfed in flames, which changed the color of the sky all the way in Amherst, clouding the sky and leaving vivid orange sunsets. Shruti Janardhanan, a sophomore computer science major at the University of Massachusetts, found herself in the middle of both crises that, due to her asthma and respiratory issues, she was uniquely vulnerable to. While the fires did not reach her house, she said that throughout September and the beginning of October, the bad air quality persisted.

And yet, she said the impact the pandemic has had on her life hasn’t been entirely negative – instead she described it as a “self-reflective journey” in “finding out how [she] could find a way to make bad things feel good.”

Prior to the pandemic, she had been planning to take a semester off to work at her dream internship: NASA. Allowed to continue her internship online, Janardhanan worked as a software engineering intern, focusing on a project on AI tools to aid in biomimicry and bio-inspired air space design, different areas of software development and learning.

Due to requirements for her major and the unique online semester, Janardhanan continued with her classes, setting herself up with a semester where she was working full time and also taking classes full time. The online format of school allowed her to do both remotely but left her to navigate how — something she had to figure out with the cross-country time difference.

In mid-October, Janardhanan moved out of California to live the remainder of her semester alonein a new city for the first time. While air quality was a factor in her decision, she mostly wanted to “experience a new place” and have a change of pace.

“The first week was a big change, I’ve never been totally alone in a city. Getting through those first few days felt like a triumph. After that I felt like I really could do this, doing that first grocery trip or that first laundry,” she said.

“My semester has been very different than what I expected,” Janardhanan added, with a small laugh while describing the trajectory she took since that first start of school. “Everything got really tough for me.”

As she reflected on her semester, Janardhanan sat far from the fires she describedin that new apartment with new challenges. Her routine had changed from an irregular schedule at home, to the day-to-day tasks of living on her own for the first time, with little routes to meeting new people in her area.

Yet despite the inherent seclusion of being in a new city during the pandemic, she said she felt the time was “perfect” to move, and that she felt she might not get a chance to live on her own like this.

Moving during the pandemic came with its challenges as well, as Janardhanan fell behind on schoolwork and job work while navigating the change and found herself working overtime to catch up. However, she didn’t regret the move.

“I really got to experience a part of myself that I probably wouldn’t have got to, being with people all the time. I learned how to live alone and be happy on my own. It kind of felt like a trial of adulthood – three months I’ll be here, and then I’ll go back eventually, and even if I like it or not, I got to try out what it’s like to be an adult before I graduate.”

“I feel like the key to doing well is just being confident that you’re able to do it in the end, maybe it won’t be my best work, but I’ll try my hardest, prioritizing stuff, and also prioritizing personal wellbeing and health.”

She said one thing the pandemic period brought herwas the ability to separate herself from a challenging spring semester and clear her mind. When the pandemic began, she said she was going through a difficult time that continued to impact her throughout the summer. Now, at the end of her journey living alone, she said “I am ok with it, that’s what I realized.”

“Thinking about me specifically, I think my life would’ve been very different without this pandemic. In the beginning when it came, I felt like it really helped me,” Janardhanan said.“I was in a bad situation in college, I had to face a lot of issues mentally and physically; I felt like it was sent to save me. My point is it didn’t completely negatively impact me.”

“Who knows, I wouldn’t have gotten my internship, been able to live here, or had this experience which is both bad and good,” she added.

When asked what she wants people to know about what this experience has been like for her, she said she wanted people to better understand the way the pandemic has impacted people who are immunocompromised.

“You don’t realize going outside how many peoplecould be immune compromised, you think it’s only going to impact that elder person over there. So many people have issues, as someone who has asthma, [when] I hear that it changes for someone who could barely walk up the stairs, that scares me.”

Since the fall semester, Janardhanan moved back to Californiato spend time with friends and family after getting fully vaccinated, but she won’t stay there. She will be moving to a new city again for the summer, where she will join IBM research and work in Artificial Intelligence research. Before that happens, she has started to backpack through various areas of the Pacific Crest Trail.

Claire Healy can be reached at clairemarie99@gmail.com.