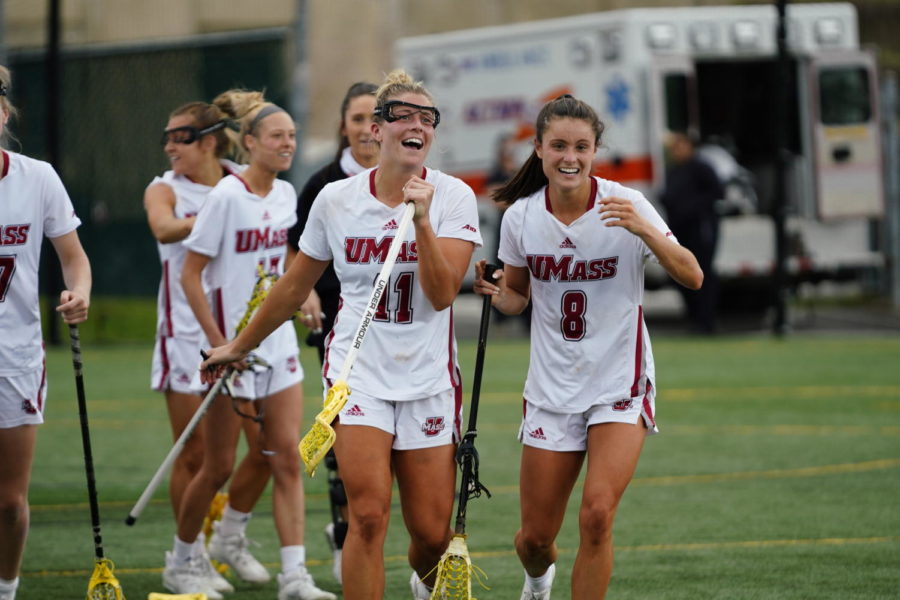 On March 7, 2020, the Massachusetts Women’s Lacrosse team beat the Connecticut Huskies in what would be their last game of their season, one that was ended due to no fault of their own.

A year later to the day, the Minutewomen took on the Huskies once again, falling in overtime. It was their last regular season defeat on a redemption journey that now includes their first Atlantic 10 Title in four years after their 18-7 victory over Saint Joseph’s on Sunday.

For the fifth years on UMass who returned for one last ride, this was more than a championship victory. It was an opportunity to prove what they didn’t have a chance to last season, and they took full advantage of that.

“They had a huge impact on the game today, and I’m just so proud [of them],” UMass head coach Angela McMahon said of the graduate students. “Going into this COVID year, nobody really knew it was going to happen. But they bought in, took a chance to come back, and I’m just so proud that they were able to see it through.”

Those graduate students included attacker Kaitlyn Cerasi, who was named Most Outstanding Player of the A-10 Tournament, along with midfielder Stefanie Croke and goaltender Lauren Hiller, who both made the A-10 All-Championship team. Joining them on the championship team were seniors Haley Connaughton, Caitlyn Petro and Olivia Muscella.

It’s no coincidence that all the Minutewomen’s individual awards went to fourth and fifth years and is a testament to the level of impact they’ve had on this team.

“Their leadership, both on and off the field… has really helped shape the culture of this program,” McMahon said. “Obviously we’re super happy with the win today, but I think we’re going to see even more of the effect that their leadership has had on the culture of our program… the rest of the team, once they are done and gone and move on, the lessons that we’ve learned together as a group, are really going to carry our team forward.”

The redshirt senior Petro was one of the biggest components of that upperclassmen takeover on Sunday. After struggling in Friday’s game, the nation’s top draw specialist put on a clinic, securing 16 draw controls while the team won 25 of 27 as a whole (93 percent). Petro also set a UMass single season record with 220 draw controls and fell just four short of the NCAA single season mark.

“It was the key element of the game for us,” McMahon said of Petro’s draw control composure. “Our run was absolutely started there, midway through that first half, where she really became dominant on the draws, and then we really started converting offensively… she just really stepped up.”

That run McMahon spoke of was the defining period of this game. With about 13 minutes left in the first half, a goal by Muscella sparked a 13-1 barrage by the Minutewomen that the Hawks had no answers for.

11 of those 13 goals were scored by seniors or fifth years, including three from Cerasi, who had four on the afternoon. But the graduate student has done so much more for this team than making plays on the field this season and throughout her decorated UMass career.

“She’s just so steady for us, even when we’re struggling or not shooting well,” McMahon said of the most outstanding player. “She’s a consistent presence all the time, specifically in terms of her physical game, but she also has a calming effect on others with her leadership style… she plays hard and she’s consistent all the time, and that type of passion that she puts out there rubs off on the rest of the team and it really helps us get momentum.”

Cerasi, Croke and Hiller are the only three players on the roster that were on the UMass squad that made the NCAA Tournament in 2017. That team fell in the second round of the tournament and would have been the only appearance in the big dance for those graduate students if they didn’t return this year. Now with their bid secured, them and the rest of the graduating seniors have one final shot to compete for a national championship.

“Lauren Hiller said yesterday at our dinner that that’s the biggest reason why she came back as a fifth year,” McMahon said of the last dance approach to this season. “It definitely gives everything perspective when you lose; you learn a lot from losing… we carried a lot of the lessons that we’ve learned over the past couple of years to put ourselves in the best position possible to not just have success, but to make sure that we’re enjoying the experience.”

The final stage of that experience will begin two weekends from now, starting on May 14 in the first round of the NCAA Division I Women’s Lacrosse Championship. It could end up being the last time these fifth years and seniors put on a UMass uniform.

Regardless of the outcome, the immeasurable impact these upperclassmen have made on this team will be felt for years to come.