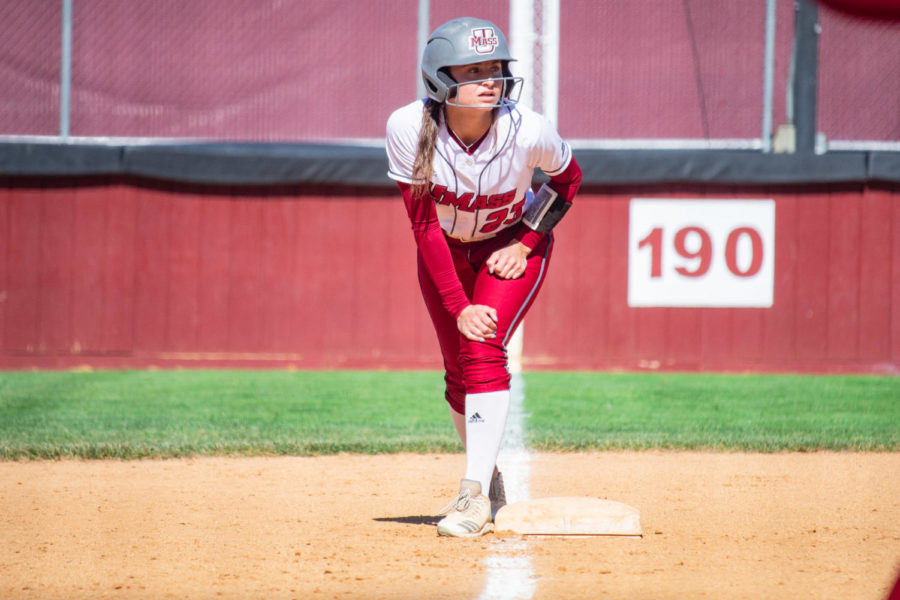 All bets are off when it’s a rivalry series. But anyone who bet on Fordham — who was riding an undefeated conference record —  was correct as the Massachusetts softball team failed to secure a win over the weekend.

In the finale of a four-game weekend on their home dirt, Devin Miller secured her third shutout of the season as the Rams topped UMass (13-16, 9-11 Atlantic 10) 10-0 on Sunday.

The noontime game began with a three-run homerun from Rachel Hubertus which only set the tone for the rest of the Rams to follow. Three was the magic number for Fordham (35-5, 16-0 A-10) as Julia Martine and Bella Ayala had their own three run dingers to make it 9-0 by the second.

Head coach Kristi Stefanoni wanted a fearless group of Minutewomen to show up to play come Sunday afternoon. With three losses already on the weekend, she felt that there wasn’t much left to leave on the line.

It appeared as though that message failed to impact the entire team come game time. The Rams sucked the life right out of UMass. Miller’s no-hit game capped off the win in just five innings, giving the Minutewomen an early sendoff back to Amherst.

Round two: UMass vs Madie Aughinbaugh

The Minutewomen knew to keep an eye out for Madie Aughinbaugh coming into this series after her dominant performance the first time these teams met this season. Aughinbaugh’s duality in the circle and at bat is hard to shut down completely, which left room for improvement this time around.

The versatile graduate student bugged UMass in game one of Saturday’s doubleheader, and she did not stop in game two. The improvement lies in the fact her damage was nothing compared to her performance in series one back in March.

“As far as how we played them this time around compared to last time around, I think our offense was a lot better,” Stefanoni said. “Making contact for sure, especially against Aughinbaugh.”

In the latter game of the day, Fordham did not mirror the early success at bat as it did in game one. The Minutewomen went on the board first, and the Rams crept in piece by piece.

Momentum shifted however when Aughinbaugh sealed a three-run fourth inning with a base hit singled through right field. Kendra Allen extended her leg and glove, but the ball bounced off, and gave Aughinbaugh the chance to send her teammate home.

The 5-1 lead for the Rams did not change when UMass went three up three down, quickly losing a chance to put itself on the board in the fifth.

With players on the corners in the following inning, a tag while on the run from first to second left unanswered opportunities for the Minutewomen to climb back at the lead.

The Minutewomen only had enough juice in them to make the score 5-2 after seven innings played.

UMass remains positive despite lack of hits on the morning

Fordham leaped out despite the wind pushing against every batter and had an early 7-1 lead on the morning.

A pair of errors in the third didn’t come back to haunt the Rams, as UMass wasn’t able to get anything on the board despite rocky defense from Fordham.

The third inning ended with a high, powerful hit from Allen that neared just a bit too far left. Aughinbaugh mirrored the location of Allen’s hit a play later, though a little lower, which brought success for her team. What was a tough ending for the Minutewomen turned into a hot start for the Rams, with the difference lying in the height of the hit into far-left field.

Steady focus and attention to detail seemed to be differing factors that separated the two teams all weekend long.

8-1, top of the fifth and both teams were smiling. After a grab and bullet throw by Bella Pantoja ended the fourth inning, it was high fives and smiles all around for UMass. The Fordham outfielders shared laughs in a group while Caroline Videtto prepared to hit.

For the Minutewomen, the most consistent positive was their body language and a large lead for the Rams had no clear effect on that.

“In this game you have a lot more failure than you do success,” Stefanoni said. “So you have to fake it till you make it more times than not.”

Miller celebrated her ninth strikeout of the day midway through the top of the fifth, but Pantoja’s base hit did not allow her to immediately get her 10th.

It didn’t matter that UMass only had two hits on the day, the handshakes and subtle dance moves were still present. After losses this season, attitude and effort were traits that Stefanoni wanted to be satisfied with. The Minutewomen didn’t seem to sulk.

But seconds later, Aughinbaugh’s walk off home run to end the game in five gave the Rams their eighth win in a row.

Too little too late

Five runs and six hits in the sixth inning. The 7-0 lead that Fordham had by the fourth put the Minutewomen in a position to rally.

It wasn’t enough. The comeback only made it 8-5 at the end of seven and UMass started the weekend on a low note.

When the series began on Friday afternoon down in the Bronx, the Minutewomen were coming off a 16-2 loss the last time these teams met.

UMass started the last series only losing by two but as the weekend went on, the victory margin for Fordham increased.

In game one, the Minutewomen didn’t look like a team that lost by 14 runs to the Rams before.

Despite another loss in the column, improvements were made, but UMass’ momentum came too late.

Fordham started hot with three hits and three runs in the first, followed with one more in the second to go up 4-0 early. Having seen the Rams create success early before, the Minutewomen knew the magnitude of stopping the surge of run before the game was out of reach.

And for a bit, UMass did contain the streak but quickly saw three more runs extend the lead 7-0 in the fifth.

A trio of singles from Alyssa Lyon, Videtto and Jules Shields ignited that sixth inning push and put the Minutewomen on the board. With two hits and two left on base in the seventh, the Rams were able to maintain their lead and come out on top.

The Minutewomen face Rhode Island for a third time this season, with a four-game series beginning on Friday and ending on Sunday.