Temple defeats UMass in first round of NCAA tournament 14-13 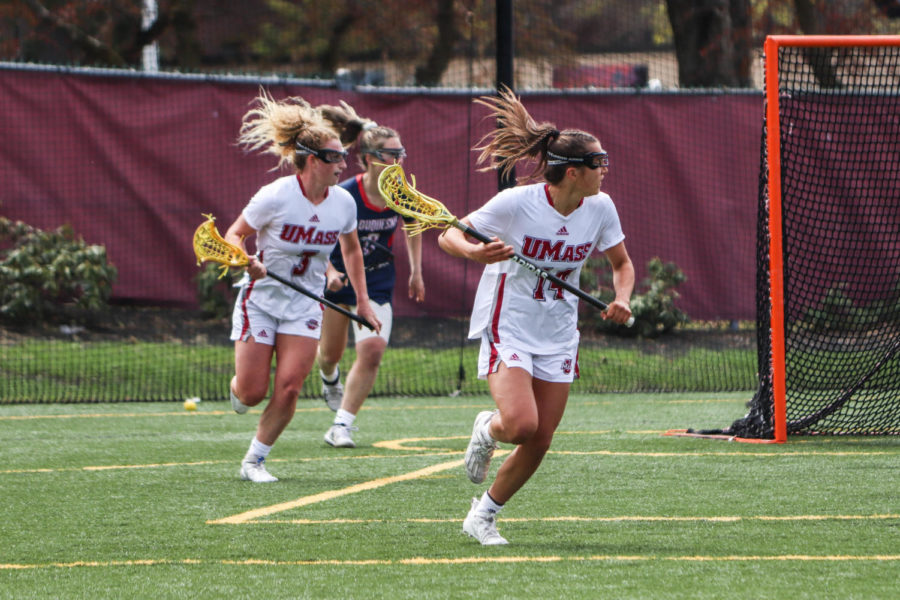 The No. 12 Massachusetts women’s lacrosse team fell short, 14-13, to Temple in the first round of the NCAA Tournament on Friday.

UMass (15-3, 8-0 Atlantic 10) went into the game down seven players due to COVID-19 restrictions and protocols.

The first half opened with the Owls (13-5, 7-3 American Athletic Conference) getting on the board, 1-0. For the Minutewomen, Fiona McGowan scored the first goal to tie 1-1.

Both teams’ offenses were reliant on draw controls. UMass is known for playing at a faster pace and was able to explode off draw controls. The Minutewomen led Temple 17-12 in draw controls due to the work done by Kaitlyn Cerasi and Amy Moreau.

It is no secret that Caitlyn Petro has been Minutewomen’s draw control specialist. Petro was unable to play today’s game owing to COVID-19 protocols. Cerasi took Petro’s place and was able to keep UMass’ possession alive. Cerasi was crucial for UMass’ offense and had a total of five goals, totaling 47 goals for her season.

“Kaitlyn Cerasi stepped up so much today,” said head coach, Angela McMahon postgame. “She had the entire team riding on her back.”

Haley Connaughton opened the second half with a goal, 10-5. Other goal contributors consisted of Julia Smith, McGowan, Cerasi, Maddy Moloney and Brinley Anderson.

Though the Minutewomen fell short, they never lacked in effort, especially in compensating for the players who were unable to play today. UMass was down 9-4 to close out the first, but immediately erupted in aggression in the second half. Momentum was thriving off forced turnovers and stepping up the pressure defensively even after it seemed as though Temple had tempo control.

UMass held the Owls at 12 goals, while going on 6-0 scoring streak mid-way through the second. Goalie Lauren Hiller endeavored in the scoring streak as well, totaling 10 saves for the game. The second half revealed the entirety of UMass’ efforts. After climbing back, with just under six minutes remaining Temple had a two goal lead.

With three minutes left in the game, Anderson scored and brought the score down to a one-goal deficit. As time was ticking, the Minutewomen looked for that game-tying goal. After a defensive stop, UMass had the ball with 11.6 seconds left in the game. McMahon called a timeout but the Minutewomen were unable to tie the game before the clock ran out, ending the season and the 14 game winning streak.