UMass’ pitching propels them to victory 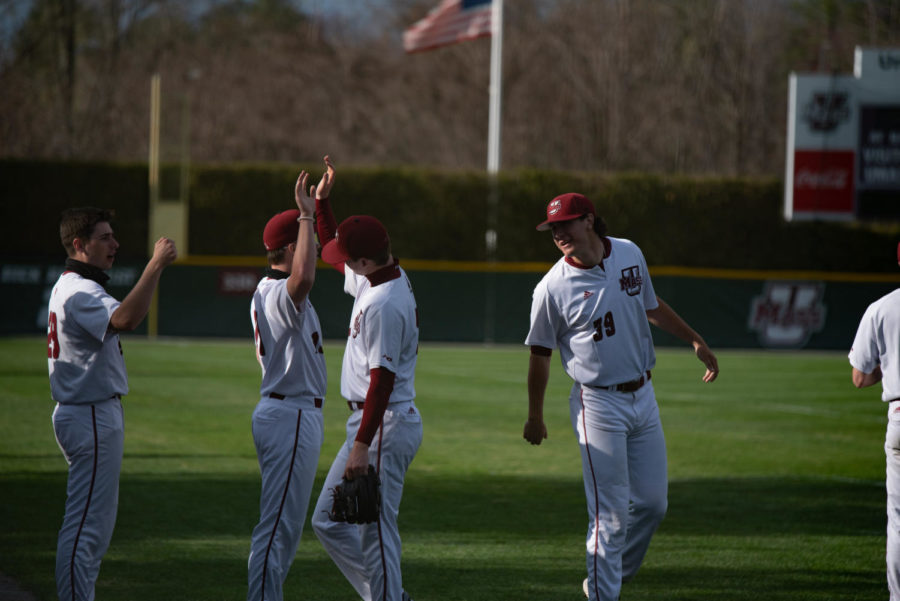 The Massachusetts baseball team faced a tough matchup going up against a Boston College team with five players hitting over .280 on the year. UMass (13-26, 3-13 Atlantic 10) received outstanding pitching throughout the game holding the Eagles (19-23, 8-19 Atlantic Coast Conference) to just two runs on six hits.

UMass’ righty Max LeBlanc had arguably his best game of the season going six innings, giving up only two runs on four hits, while striking out eight.

“It was unbelievable,” UMass shortstop Eddy Hart said when referring to his teammate’s performance. “You can’t really ask for more than the quality of start that he gave. It was big for us, but it was also big for him too, being a freshman facing a good team like that. It should be a confidence boost for him moving forward.”

UMass found themselves in a game that proved to be a pitching duel, as going into the bottom of the eighth the score was knotted at 2-2. The Minutemen got their bats going and loaded the bases with just one out in the inning. Designated hitter Mike Gervasi stepped to the plate and grounded into a fielder’s choice. With now two outs in the inning the Minutemen were in need of some timely hitting. Fortunately for UMass, Boston College’s Joey Walsh threw a wild pitch allowing for Hart to score the go ahead run.

“I think we’ve been playing pretty well the past couple weeks,” Hart said. “A couple balls just haven’t bounced our way and that’s going to happen in the game of baseball. It was good to have that one at the end on the passed ball that I scored on, one ball that bounced our way.”

Southpaw sophomore Tucker Wittman closed out the game for the Minutemen providing strong pitching down the stretch. Wittman went two innings giving up a single hit, striking out one. Wittman picked up his second win of the season.

UMass received much needed offensive contributions from right fielder Michael Rounds and second baseman Aidan Wilde. Rounds came into the game hitting just .211, but in the bottom of the second drove in the game’s first run with an RBI single. In the bottom of the fifth Wilde stepped to the plate and hit his second homer of the season, a solo shot to right field.

“I thought it was good we got something out of the top of the order,” said UMass head coach Matt Reynolds postgame. “It’s good to see nine hits, there was a time in the year when nine (hits) seemed faraway.”

Although, the Minutemen have had their fair share of struggles this season, the past five games have seen them go 3-2 while holding their opponents under four runs three times.

“It’s encouraging that we are playing competitive baseball,” Reynolds said. “We’re starting to get closer to playing up to our ability level, which is what you want as a coach.”

UMass’ win against the Eagles marks its second straight against Boston College, as last the time these programs met was April 2, 2019. UMass won that game with a score of 6-2.

The Minutemen will have a 10-day break as they enter into the final stretch of the season. UMass will resume play on May 14, at home against St. Bonaventure.

James Diluca can be reached at [email protected]