The Stonewall Center: a timeline 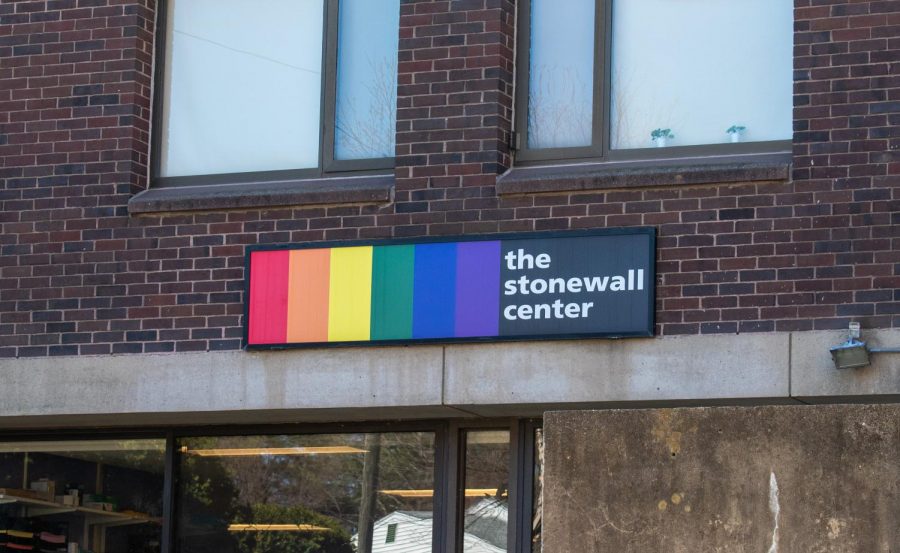 The following information was obtained from Collegian archives and the Stonewall Center’s website. Interested in learning more? Visit the Special Collections and University Archives on the 25th floor of the W.E.B. Du Bois Library.

The Stonewall Center, a source of support for LGBTQIA+ students at the University of Massachusetts, has faced a long history of shifting University policies and proposals. Through decades of financial alterations and changing social climates, The Stonewall Center continues to work towards its goal: to provide support, resources, programming and advocacy for LGBTQ+ students and campus allies and to educate the campus community about oppression and inclusivity.

December 1984:  In an article by the Daily Collegian dated Dec. 10, over 200 LGBTQ+ students gathered in front of the Whitmore Administration Building and present a list of demands to the administration in response to the SGA’s decision and other related anti-LGBTQ+ incidents.

After the protests, Felice Yeskel was hired as a part-time human relations planner and advocate to coordinate the collection of data and to make a report analyzing the data and recommending the university action for the protection of LGBTQ+ rights.

In an old recording, taken at the time of the protests, Yeskel, speaking on behalf of the students, explained that LGBTQ+ students “don’t feel safe here, we feel discriminated against, we feel harassed, we don’t feel like there’s anywhere we can go where we feel like we can get help. We don’t trust [that] the people who help us won’t victimize us because of their own homophobia.” She noted that the demands of the students have made the University decide to study the problem.

March 1985: A ten-page questionnaire was handed out at various campus events and agencies, the same questions were placed in the Collegian as a one-page advertisement. This survey consisted of 137 close-ended questions and the questionnaire covers the following areas: general harassment and discrimination, student services, academic courses, advising and environment, housing, and demographic information.

On March 27, The Student Affairs Research and Evaluation Office (SAREO) also assisted Yeskel with the research by conducting project pulse, a telephone survey to measure student perceptions of prejudice and negative student attitudes towards lesbian and gay students. The pulse survey contained 41 questions, only one of which is open-ended. Around 271 students respond to the survey at the time.

During the research process in the same month, staff in residence halls also completed a survey designed to evaluate the level of anti-gay and lesbian incidents in housing, where they answered a thirteen-question survey that consisted of eleven yes or no questions and two open-ended items.

After the entire research process and data collection were completed, recommendations were made to the university. In total, there were 15 recommendations, of which one was to create an Office of “Lesbian, Gay and Bisexual Concerns.” The function of the office is to inform the UMass community, support and advocate for the LGBTQ+ community and “provide a safe and accessible place for lesbian gay and bisexual students to seek information and report incidents of harassment and discrimination,”according to the report.

The recommendation report states: “The problems reported in this report must be addressed; the campus task is to find creative solutions. The institution’s work in this area is critical. Without significant changes, the institution falls short of fulfilling its mission to provide opportunities for personal and intellectual growth and to combat ignorance.”

After the recommendations, the administration decided to approve a two-year trial for the program, initially titled, “The Program for GLB Concerns.”

At the time of the program’s creation, it was only the third of its kind in the United States — a student support and resource center for lesbian, gay, bisexual and transgender students.

1995: The group officially renamed itself the “Stonewall Center,” to be inclusive to the LGBTQ+ community and to pay tribute to the Stonewall Riots of 1969. The student resource center also relocated to its current home inside Crampton residence hall in Southwest.

That same year, the Stonewall Scholarship Fund was created. As of 2002, the fund had approximately $40,000, but was continuously seeking more. The Scholarship Fund served two purposes: an emergency fund for lesbian, gay, bisexual, or transgender students that have been “cut off” by their families upon discovery of their sexual orientation and need money to stay in school; to promote scholarship in LGBTQ+ studies within the University.

February 2002: On Feb. 20, the Collegian reported that the Stonewall Center was facing a 20 percent slash in funding.

April 2002: The Center received a donation from alumni to create the Stonewall Center Student Support and the Leadership Funds.

October 2002: A student group created by the Transgender Activist Network and LGBTQ+ community, called Restroom Revolution, gathered at the Stonewall Center to ask the University of Massachusetts to recognize their need for gender-neutral bathrooms. The Stonewall Center continued to serve as the group’s meeting place for the foreseeable future.

February 2005: On Feb. 6, students went before a University commission to air concerns with diversity issues. One student, Thomas Coish, said the Stonewall Center’s budget was slashed by 40 percent. “It seems that sometimes the University has to be dragged kicking and screaming to do the right thing during situations far too often,” he said.

November 2015:On Nov. 18, the Collegian reported that the Stonewall Center announced that University Health Services is able to prescribe, inject or teach to inject and monitor hormones for transgender students.

September 2017: On Sept. 19, SPIRE began to include more gender and sexual orientation options, the result of a group effort by the Stonewall Center, the registrar’s office, University admissions and the Office of Information Technology.

January 2019: In late January, a fifth Student Care Supply Closet location opened for UMass students at the Stonewall Center. Students are able to pick up toiletry and household items from the supply closets free of cost.

October 2020: In October, UMass was recognized as one of the top 40 LGBTQ+ -friendly schools.