A childhood in Palestine, an education at UMass 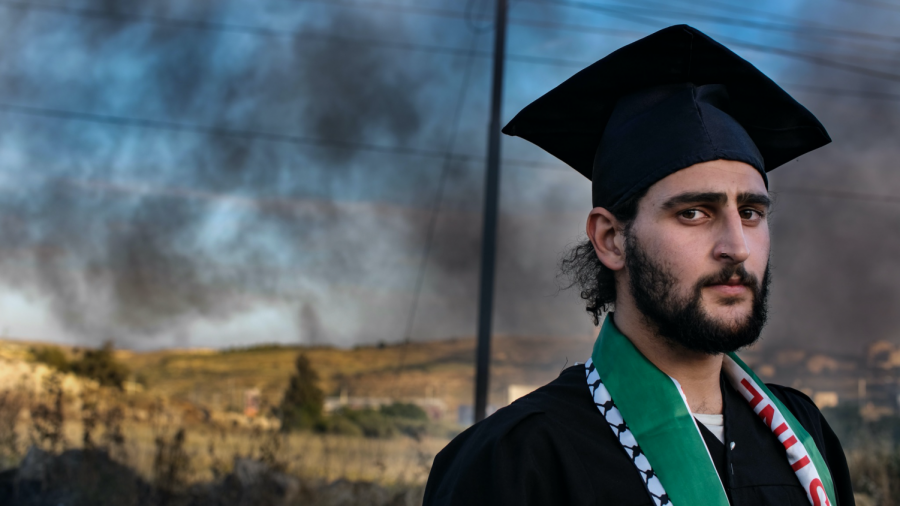 During his commencement day, Jalal Akel’s Palestinian identity took center stage as he joined demonstrators in the West Bank, wearing a stole that read ‘Palestine’ draped over his gown. The environment that Akel found himself in was vastly different than the crowded bleachers and excited cheers that most graduates at the University of Massachusetts were experiencing inside McGuirk Alumni Stadium.

“I showed solidarity with my friends and sisters and brothers and I stood for Palestine and for justice and freedom and I graduated…over there,” Akel said. “I stood for 10 minutes, you know, trying to take a photo and there was a sniper, like, half a kilometer to my right and there was tear gas behind me.”

Akel’s heritage stood in the spotlight once again when he wrote a letter to Chancellor Kumble Subbaswamy describing his experience and requesting a statement of solidarity with Palestine as upheaval grew in his country. The circumstances he found himself in during his graduation, however, were not unfamiliar to him.

Akel was born and raised in Jerusalem and describes his upbringing as “very interesting.” His own circle of friends included people whom he considered open minded, though he also experienced many attacks on his Palestinian identity growing up.

“I had many friends, we were at protests many times…for justice and freedom of Palestinians, and a few of my friends were arrested. One of them was even shot with a rubber bullet. A lot of tear gas and a lot of people got hurt,” Akel explained. “It was almost never safe for me or my people.”

Fear was one of the defining emotions of his childhood and adolescence. A Palestinian boy from his neighborhood was kidnapped and murdered. In one incident, Akel was expected to serve an individual with an assault rifle during his time as a waiter at a hotel in Jerusalem.

Israel’s occupation of Palestine did not only shape his life, but that of his family members before him. In 1976, Akel’s uncle died at the age of 21 at a peaceful protest. His grandfather was removed from his home in 1948, in what is known as the Nakba.

The Nakba, or the “catastrophe,” is used to describe the eviction of over 700,000 Palestinians and the destruction of hundreds of Palestinian villages to make room for Israeli settlers. The Nakba occurred following the declaration of Israel as an independent state, but Palestinians continue to be displaced to this day.

Recent violent developments in the area arose following the Israeli courts’ decision to have multiple Palestinian families evicted from their homes in the Sheikh Jarrah neighborhood of East Jerusalem to be handed over to Israeli settlers.

Following the ruling and reactionary upheaval, Israel indiscriminately bombarded the Gaza strip with airstrikes while Hamas — the militant group that has taken over Gaza — fired rockets into Israel’s borders. Over 200 Palestinian lives and a dozen Israeli lives were lost in the violence that ensued. A ceasefire has since been declared; however, the devastation continues. Most recently, Israel ordered and carried out the demolition of homes in the Silwan neighborhood of East Jerusalem.

Akel’s early experiences were very formative to his identity.

“[My upbringing] definitely shaped a lot of my personality and who I am as a person. I’ve learned to resist and fight for freedom and justice,” Akel said.

He initially came to the United States to attend Cape Cod Community College, where he obtained a liberal arts degree. He then came to UMass, where he studied civil and environmental engineering and permaculture design.

Although Akel’s Palestinian identity stood in the spotlight for his last moments at the University, his heritage was something he often quietly concealed at school due to the misguided and ostracizing discourse that sometimes took place around it.

“I was always concerned that somebody would find out [that I’m a Palestinian] … I always felt some kind of threat,” Akel said.

He was also concerned about the assumptions that other students would make about him if they did uncover his heritage. Akel claims his identity “first as a human being.”

Akel made the decision to spend his senior year in Palestine following the transition to remote learning. Although he had some difficulties throughout the year due to a lack of access to resources that other students had on campus, he described the experience as “pretty wonderful.”

“It was the first winter I spent in Palestine for the first time in six years…I was able to be with my family and friends while also completing my degree,” Akel said.

This decision would also lead him to spend his graduation day in Palestine. As his home country was engulfed in violence, Akel felt uncomfortable celebrating his graduation under normal circumstances. However, he came to the decision that he deserved to celebrate his years of studying, one way or another.

Akel also hoped that the jarring image of him in his cap and gown among the smoke and tear gas surrounding him would make an impactful statement.

“I’ve seen people get shot, I’ve seen people fall from tear gas, like lose consciousness, I have seen people, like literally get shot and die on the spot…all my friends, and everybody in my town was [at demonstrations] so it didn’t make sense for me to stay home,” said Akel, describing the circumstances at the time.

“I realized, like, wow, today is my graduation day. Like, all these five or six years in the U.S. studying like today it’s over officially, and that I deserve to celebrate. And, but again, celebrate properly in these circumstances.”

An identity that bent towards justice, an isolating experience at UMass and his awareness of the stake that UMass had in the Israeli occupation of Palestine preceded Akel’s decision to graduate amongst demonstrators in the West Bank. It also preceded his decision to write a letter addressed to Chancellor Subbaswamy following his graduation.

“It’s very disturbing when I realized that the university I’m attending and paying money to supports Israel, the country that is occupying and killing my people,” he said in reference to the partnerships that UMass has had with corporations such as Raytheon, which has helped build Israel’s defense infrastructure.

Addressing Subbaswamy in an email, Akel wrote “I am kindly requesting that you, as the Chancellor, publish a statement to the UMass public declaring solidarity with the Palestinian people, who have been struggling under the oppression and cruelty of the Israeli occupation for 73 years now.” In said email, he also described his own situation and attached his graduation photo.

He further explained this statement: “I come from, like, a kind of a middle-class family here in Palestine. It’s a great achievement to have gone to an American university such as UMass, and graduate with a civil environmental engineering degree…the students are really strong, the faculty members are all really amazing. My department is amazing,” Akel said.

“I have to be proud of being a Palestinian. I’m not afraid of saying so. And yes, I graduated from UMass. I think it’s a great school. But I also want to let you know that I’m a proud Palestinian American…butI cannot be proud to be a UMass Amherst graduate unless my [Palestinian] voice is recognized and heard, and my identity is seen and acknowledged.”

Subbaswamy responded to Akel with a statement of congratulation. Upon his second time receiving the email, the Subbaswamy acknowledged the circumstances that Akel was describing in his letter.

“Thank you for writing again and for sharing your story. I especially commend you for your impressive achievement in these extraordinarily challenging circumstances. I fervently hope for a peaceful resolution,” Subbaswamy wrote in his response to Akel.

The UMass Amherst Students for Justice in Palestine wrote a letter via email to Subbaswamy following that of Akel’s, criticizing his response.

“You responded with an email that merely congratulated Jalal and blatantly ignored everything else he took the time and energy to explain. This was unacceptable and proved once again, that you disregard the experiences of Palestinian students on campus,” the members of the UMass SJP wrote.

UMass SJP’s letter demanded that the University declare a statement of solidarity with Palestine, end all study abroad trips offered to Israeli educational institutions and disclose and divest any financial ties between the University and corporations that have been tied to Israel, including The Raytheon company.

The letter also criticized Subbaswamy’s previous statement condemning the boycott, divest and sanction (BDS) movement, as well as his conflation of anti-Semitism with anti-Zionism, “the former being an act of hate and the latter being the rejection of a violent settler colonial project,” UMass SJP members wrote.

“The BDS movement opposes racism, antisemitism and Islamophobia in its mission to uplift the humanity of the Palestinian people,” the letter continued.

Akel also pointed to the harmful conflation of the two in statements previously released by Subbaswamy.

“The Chancellor has not been able to distinguish between, you know, anti-Semitic and anti-Zionist. You know, the Palestinian cause has nothing [to do with] anti-Semitism, it’s about anti-Zionism, anti-cruelty, anti-oppression,” Akel said.

“The recent escalation in violence involving Israelis and Palestinians has directly affected many of our students who live in that region and has been extraordinarily trying for many more. I write to express my support for the safety and well-being of all UMass Amherst students, and my hope for a peaceful resolution of the situation that has for so long plagued the area. Please know that you are all in our thoughts and our hearts,” Subbaswamy wrote.

Akel was not completely satisfied with Subbaswamy’s response, which groups all students with those in Gaza, which he describes as “the biggest open-air prison with 2 million people who have nowhere to flee and are in a threat of bombs landing any moment.”

However, he finds some comfort in the word Palestinians being used, something he says he has not seen written before by administration.

“I feel like even the word ‘Palestine’ is very, like almost censored on campus. We’ve never seen it written anywhere by the officials,” Akel said.

Akel, describing the urgency of the time, points to the amount of unprecedented collective activism for Palestine taking place globally.

“This is the first time we’ve seen international solidarity. I mean, there’s protests everywhere. There are protests in Boston, in New York, in France, and Chile and Germany and Ireland. And, like, we’ve never seen that many demonstrations for Palestinians before”

He also emphasizes the importance of the role that universities have in social movements, and consequentially the significance of UMass supporting Palestine and Palestinian students.

“Universities are, like the battle grounds for, like, political movements, and justice happening and freedom, because with education comes freedom… That’s where radical movements happen. And that’s also where all the money is invested. And so, upholding the denial of the existence of the Palestinian people and their suffering is really like powerful,” Akel said.

“Universities such as UMass must have so much power to like, basically end occupation if they boycott and just liberate from these corporations and support Palestinian students.”

Akel hopes for the University to “recognize and acknowledge Palestinian students.” He also has many hopes for Palestine and the city of Jerusalem, a place that is highly regarded by many ethnic groups and religions

“There’s the Armenian Quarter, there’s Jewish, Christian and Muslim besides all the other like temples for monks and priests and rabbis and sheikhs…[Jerusalem] is a very holy place that I don’t think anyone has to be denied entry from there. I want everybody in the world to come and live if they want in Jerusalem because Jerusalem is part of Palestine,” Akel said.

For his home country of Palestine, Akel hopes for liberation.