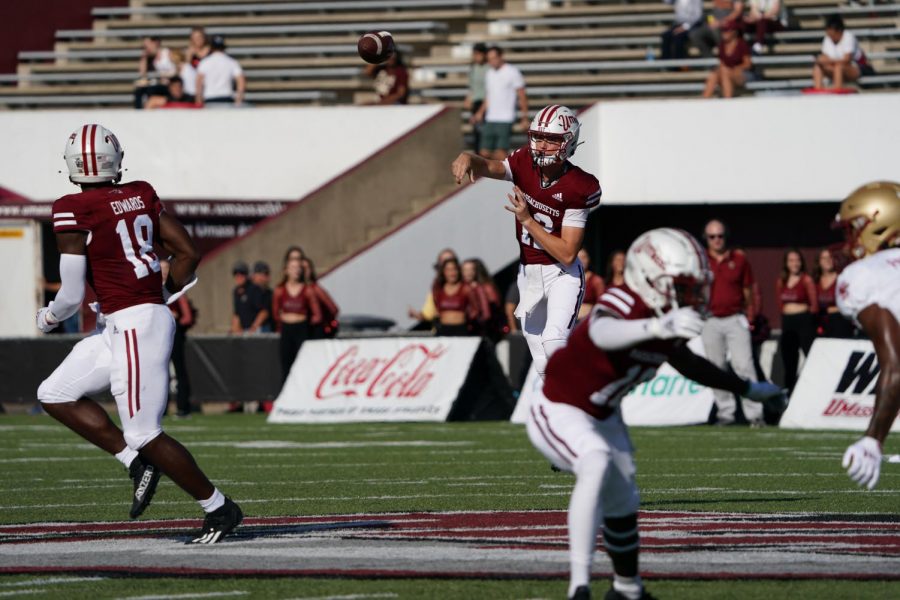 A roller coaster of a debut performance from Brady Olson leaves Massachusetts football team head coach Walt Bell with some decisions to make going into week three. The true freshman threw for 214 yards and three touchdowns in a 45-28 loss to Boston College Saturday afternoon. Tyler Lytle’s absence due to injury paved way for Olson to prove himself.

Olson’s 214 yards through the air is only the second time in any of the past three seasons — also Bell’s tenure at UMass (0-2) — that a quarterback has amassed the 200-yard mark in a game.

Olson accomplished this while completing only 14 of his 29 pass attempts, leaving room for growth after his first collegiate start. The Milford Academy product underthrew wide receiver Eric Collins on his second attempt of the game, leading to an easy interception for Eagles (2-0) defensive back Josh DeBerry.

“He played like a freshman,” Bell said of his quarterback at the end of the first half.

Olson totaled 25 passing yards on 4-of-9 completions heading into the third quarter. Miscommunication with OC Johnson, who ran an out route while Olson threw an in route led to a quick three-and-out in the first quarter, which the Eagles scored on in the next possession.

While confidence was displayed in the first half, execution met up with Olson’s willingness to throw the football. This was exemplified on a fourth quarter drive where Olson was near perfect. Finding four different pass-catchers while rushing for 15 yards of his own, the scrawny freshman moved his offense 75 yards in four minutes and 17 seconds for what looked to be the smoothest drive a quarterback has put together under Bell at Amherst. He finished the drive throwing 5-of-6 for 65 yards and the score to running back Ellis Merriweather to cap off an effortless drive for the Minutemen.

“Brady has unbelievable self-confidence,” Bell said. “He’s not a mistake repeater, he handles failure unbelievably well for a kid that’s attentive. Usually when you get those type-a guys they dwell on mistakes, he does not… He’s going to be a really good quarterback for a long time.”

Highs and lows were riddled throughout Olson’s first career start. He lofted a perfect pass to wideout Rico Arnold in the third quarter for a 56-yard touchdown, leaving BC defenders in the dust. He also threw a couple passes too high to Arnold, one of which he had a defender beat and could have potentially scored another touchdown if the ball was placed in the proper area.

Olson’s second touchdown came 15 yards out on a pressuring fourth-and-five. He found a gap to deliver NC State transfer Eric Collins the score, making it 35-21 Eagles.

Olson showed slight mobility as well, converting on fourth down off a designed bootleg, along for gaining ten yards on a scramble. The parallel is the lost fumble on another quarterback-designed run, only to be saved by Kay’Ron Adams jumping on top of it.

Olson provided Walt Bell and UMass something that hasn’t been seen in several years at the quarterback position.

Consistency was not on the side of Olson, leaving reason to believe that Lytle’s experience and maturity will allow him to remain the starter once he returns from injury. Lytle was pressured by Pittsburgh far more than Olson was by BC. Olson was virtually untouched, with the Eagles not converting a single sack. The Panthers sacked Lytle five times leading to his inactivity in week two.

At the least, Olson solidified his role as Bell’s long-term option for quarterback, a comfort Bell has not had as head coach of UMass.