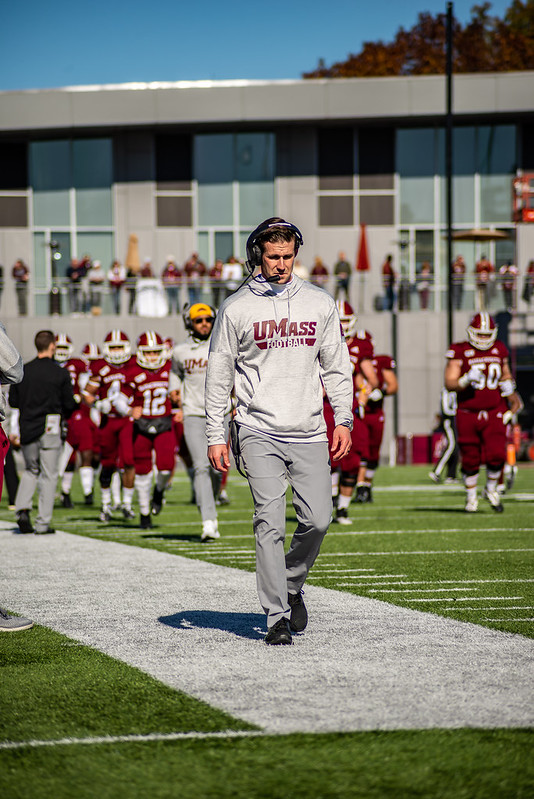 With quarterback Tyler Lytle still dealing with an injury, Brady Olson is set to make to make his second career collegiate start. Lytle was injured last week and missed the Massachusetts football team’s home opener against Boston College. Olson was thrust into action with the Lytle injury and did not disappoint in his debut, as he threw for 214 yards and three touchdowns.

Olson became the first UMass quarterback to throw for three touchdowns since Ross Comis, who accomplished the feat Nov. 3, 2018 against Liberty.

“It’s very impressive the way he goes about his game,” said wide receiver Eric Collins of Olson. “Coach Bell gives him a hard time in practice and stays on him, but when it comes game time he’s used to it, he’s ready.”

Collins added that he and his fellow receivers do their best to encourage and reassure Olson.

“Us receivers we keep talking to him, we keep him motivated, tell him that we got him, and I tell him all the time that I believe in him.”

Olson’s first start did not come without some mistakes as he threw two interceptions. On his second career pass attempt, Olson underthrew Eric Collins and had his pass picked off. Olson’s second interception came in the fourth quarter as Eagles’ Brandon Sebastian intercepted Olson in the red zone.

The Minutemen also deployed another freshman quarterback in Zamar Wise against Boston College. Wise was used sparingly throughout the game and was primarily utilized on option and gadget plays.

“Zamar has probably matured as much as anybody in this program, academically, socially, athletically, and he deserved to get in there and play a couple plays,” said Bell.

“He did a nice job when he was in there, didn’t hurt the football team, communicated well… if the opportunity sees fit, we’ll continue to play him.”

The Minutemen will hope to have success passing against a stout Eastern Michigan defense that is only allowing 176.5 passing yards per game.

With Olson set to start for the 2nd straight week, Bell believes that the 18-year old signal caller will be ready come Saturday.

“With a young quarterback you’re always concerned, but he learns well, he’s not a mistake repeater, he comes to work every day and he’s going to be as prepared as an 18-year old can be.”