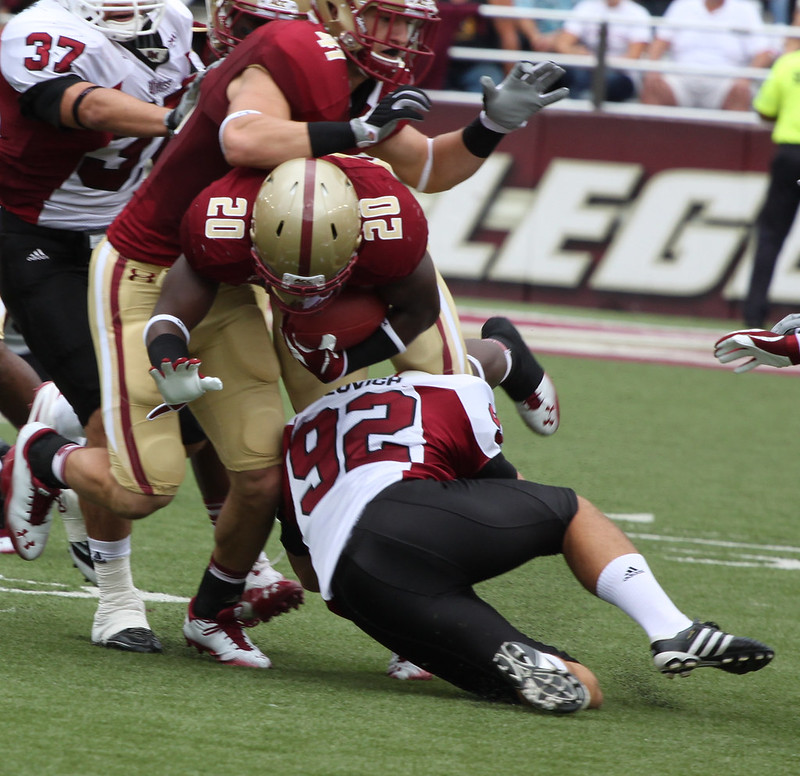 Located just 70 miles apart as the crow flies, the considerable amount of overlap between the Massachusetts football team and Boston College isn’t surprising.

Most recently, Savon Huggins bolted for Chestnut Hill after being hired as UMass’ (0-1) running backs coach on Jan. 1, 2021. Huggins tweeted a registration link for head coach Walt Bell’s football camp on July 20. He was gone before the month ended.

Linebackers coach Sean Duggan spent one season with UMass in 2018 before piloting a suffocating defense at Ohio State in 2019. When Duggan landed at the Eagles (1-0), associate head coach and defensive backs coach Aazar Abdul-Rahim joined him one day later. Like Duggan, Abdul-Rahim spent just one season at UMass. He previously worked with Bell for two seasons at Maryland. That time together was enough for Bell to say he considers him family, and deem him “one of the most prominent members of the community in Washington D.C.”

“Aazar is an incredible human being,” Bell said. “I’m sure that everywhere else he’s been, he’s had a wonderful impact on his kids, on his players, they love to play for him. I love him, I can’t wait to see him on Saturday.”

Bell will also have the chance to visit with Jake Byczko, a former UMass defender. Byczko played three seasons with the Minutemen on the defensive line before developing into a defensive end/linebacker hybrid by his senior year.

The Auburn, Mass. native played for Abdul-Rahim’s defense in 2019 and was the Eagles’ first transfer of the season back in December of 2020 as a graduate student. Byczko tallied 126 tackles over his four-year career in Amherst, including 55 tackles and 3.5 sacks in his sophomore season.

No longer on either team, Cole McCubrey recently finished an impressive undergraduate career with UMass after originally committing to Boston College. McCubrey was possibly the single bright spot during UMass’ 1-11 2019 season barring the win against 0-12 Akron. He led Abdul-Rahim’s defense with 84 tackles (46 solo) that year and finished with 165 total tackles for the Minutemen before his next stop. Like Byczko, McCubrey entered the transfer portal as a graduate student. He’s now at Bentley University and recorded 10 tackles in his first game for the Falcons.

After extensive thought and consideration, I’ve decided that I will be graduate transferring from UMass for my last year of eligibility. Thank you to the past and present players and coaches who made my time at UMAss so special. pic.twitter.com/9bXvnzE805