‘It feels empowering to have this many people:’ Hundreds of students gather for second night of Theta Chi protests 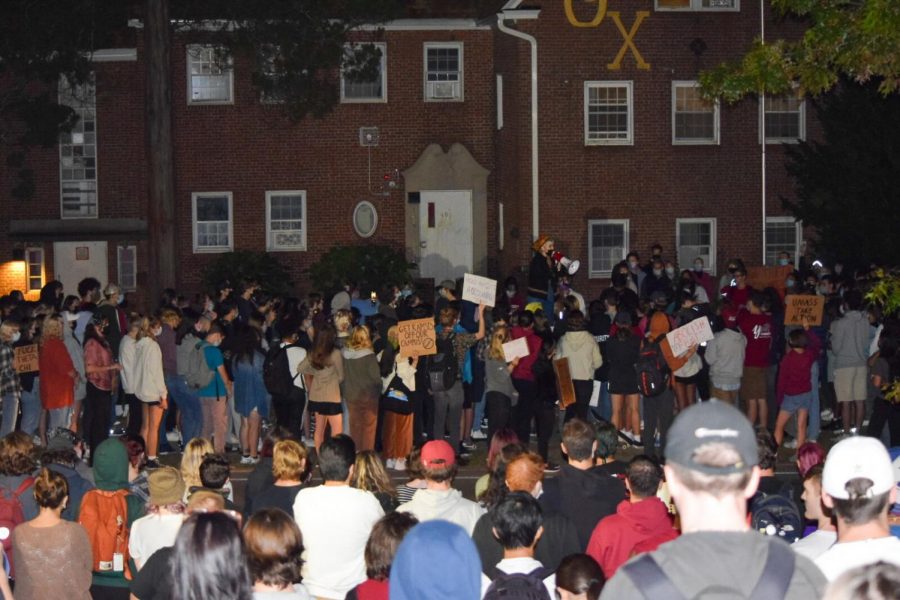 On Monday night, hundreds of students from the University of Massachusetts gathered in protest outside of Theta Chi fraternity after accusations of sexual assault surfaced over the weekend. The protest was the largest yet in a series of demonstrations against the fraternity in the last two days.

The crowd focused around a central spot in front of the fraternity where attendees would stand on an elevated surface and take turns sharing their experiences and opinions with a megaphone. Protestors spanned across Theta Chi’s lawn and sidewalk, as well as the lawn across the street in front of the University’s Studio Arts Building. The protest began around 8 p.m., and cleared out by around 11 p.m.

“It feels empowering to have this many people. We’re all on the same wavelength, I guess, and trying to do the greater good for people here and keep the community and UMass safe,” said Georgie Hynes, a junior electrical engineering student.

The protest, largely promoted through social media sites like Yik Yak and Reddit, was not officially organized by any one group. However, Beck Long, a sophomore art history major, took the initiative to make this protest more structured than the previous ones.

“I was afraid it would go downhill, so I went to [the Center for Education and Policy], got a megaphone. They helped me with organizing tactics, and then I came here and I was like, ‘This is happening in an orderly fashion,’” Long said.

The Sunday night protest resulted in property damage and vandalism.

“You’re actually spreading the message and you’re not doing stuff that could invalidate what the protests are about,” said undecided freshman Nicholas de Melo of Monday’s protest.

A member of the UMass faculty also came out to join the protest. Veronica Everett, an adjunct sociology professor at the University, addressed the crowd with a megaphone. A trained clinical social worker, she has seen first hand the harm of sexual assault on campus, citing the fact that many female students from UMass come to her office in Amherst for therapy.

“The madness for me was girls coming to me from [University Health Services] because they didn’t want to press charges but they needed therapy, and I spent three to four years dealing with the trauma that they never reported,” Everett said.

“They don’t report because you know what happens. They don’t get listened to and if they get believed, they still don’t get justice,” she said.

Everett said that she’s seen a culture of sexual assault on the UMass campus, which is why she chose to attend the protest.

“Coming from the students’ perspective, they don’t feel supported by the administration, ever,” she said. “Students don’t feel like there’s a pathway to clean, streamlined reporting, and there’s a culture of ‘oh, you’ll never be believed.’”

Everett was not the only individual skeptical of the University’s handling of sexual assault cases. Senior food science major Caroline O’Connor said that she has witnessed first hand the lack of support UMass provides survivors when trying to report her own case of sexual assault.

“So I am so sick of seeing that happen to other girls on campus here. And I’m just done letting it happen. I’m done sitting around and letting these boys think that they can treat women like that,” O’Connor continued. “This is supposed to be a safe space for everyone. And it’s not, and I’m not going to stop fighting until it is.”

Senior Olivia Brennan expanded on the negative fraternity culture she feels has been present at UMass for years. “I’m sick and tired of this. I’ve been here four years, my sister was here four years before me, and I’ve been hearing about the terrible things that they [Theta Chi] have done to women ever since then,” Brennan recalled.

“While I hope that UMass does something, I also want to send a message to Theta Chi and let them know that they should be scared to be here because I’m not going to be scared anymore,” Brennan said.

A QR code promoting the Survivors’ Bill of Rights was passed around by various students at the protest. When scanned, it pulled up a pre-filled email draft to the Vice Chancellor for Student Affairs and Campus Life, Brandi Hephner LaBanc, urging that the University implement the Bill and support survivors of sexual assault.

Gil Kim, a junior Legal Studies and Psychology major, was one of the students displaying the QR code. A staff member of CEPA, she said the Bill was passed in the Student Government Association last semester, but “the administration didn’t really do anything about that support.”

“That’s what we’re trying to work on, is making this more of a strategic move, making sure that these actions last instead of being something that the administration can brush off.”