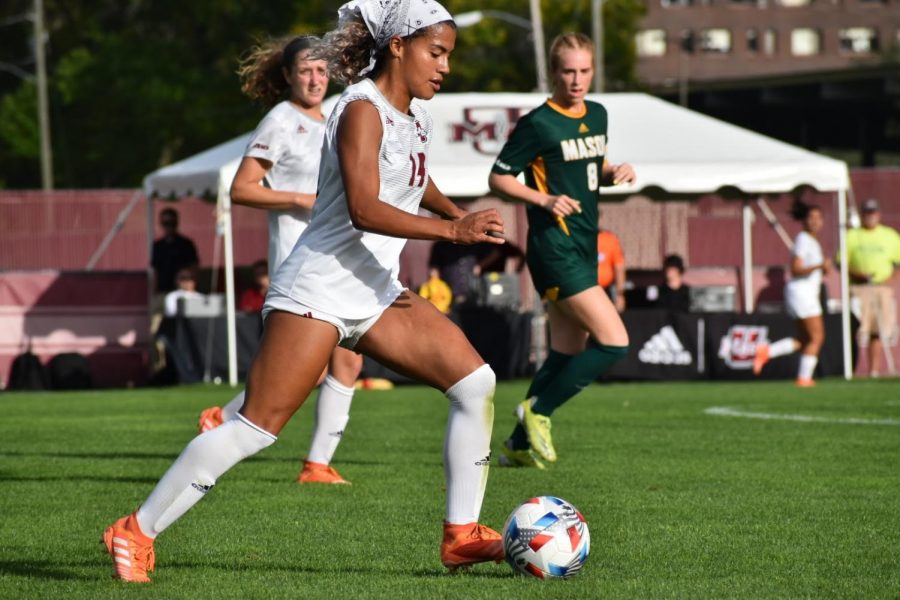 In the basement of Boyden gym, UMass coach Jason Dowiak and the Massachusetts women’s soccer team sat in the film room, discussing nuances from Thursday afternoon’s win over George Mason. UMass’ (6-2-2, 2-0-0 Atlantic 10) schedule consists of having only a two-day break between some of its games, leaving the Minutewomen with limited opportunities to train and recover before they converge in the middle of Rudd Field on game day.

Dowiak and many of the starters — who have consistently seen minutes throughout the first ten games — took to yoga this morning, where players made a point to stretch out and maintain the same level of freshness and energy that UMass has shown in recent games.

“At this point we’re just trying to manage their legs,” Dowiak said. “There’s about seven or eight players who played a lot of minutes yesterday again, they don’t need to get touches or anything like that, that’s not really going to change us.”

The rest of the roster were across Commonwealth Avenue, battling it out on the practice field in torrential rain, still fighting for their spot in the starting lineup and maintaining that physical element to their training.

“The group that was out with Sam [Mitchell] and Lauren [Aldred], the goal for them is to keep them physically ready and engaged to perform,” Dowiak said. “We’ve been playing as big as we can 7v7, 8v8, 10v10 with them so we feel great about our depth right now. I think we used about eight or nine more players [Thursday].”

The Minutewomen are not accustomed to dividing up their group to focus on different aspects of training. Both the standout few and the rest of the team typically practice altogether on the same field regardless of each other’s individual training or set goals for the day.

“Keeping that mentality is tough sometimes when we separate,” Dowiak said.” I don’t like separating. It was different today because of the weather more than anything and wanting to cover some other things today. Practice is a lot more psychological and mental preparation. We want them to be able to envision what they’re good at and so we talked about that a lot today.”

Off the field, UMass’ recovery starts with its nutrition and keeping a well-balanced diet and sleep schedule to stay at peak performance for as long as they possibly can. On cold and rainy days, Dowiak stresses the importance of drinking orange juice and eating foods that provide his players with the most important nutrients to avoid developing a cold and being sidelined on Sunday.

“Molly [Barnes], our nutritionist, has given them a lot of information of what to eat, when to eat, why to eat it,” Dowiak said. “So really we just hope that they’re listening to what we’re offering. We have a really healthy mentality. The team’s mentality about nutrition and their diet is really good so it’s just making sure they get enough sleep more than anything.”

Unlike the off-season where the Minutewomen try to come into training as physically strong as they can be, weight training switches gears around this point of the season, where maintaining their fitness is key towards their execution on the field.

“We still go into the weight room on Tuesdays and Fridays,” Dowiak said. “On Tuesday nothing’s heavy, it’s all about maintenance and technique, and we’ll do certain exercises that also help with that recovery of their legs. Some players who are playing a little less minutes will go a little more intense in the weight room. Friday is more of an upper-body workout with a recovery focus for their legs.”

UMass will come together Sunday morning ahead of its third A-10 matchup for team breakfast, a staple on game days.

“On game days we do pregame meals together,” Dowiak said. “We want them to be together for those three hours pregame … keeping them together so we all have the same frame of mind on game day.”

The Minutewomen take on Rhode Island at home on Sunday. Kickoff is set for 1 p.m.