The sit-in was held in Whitmore administration building 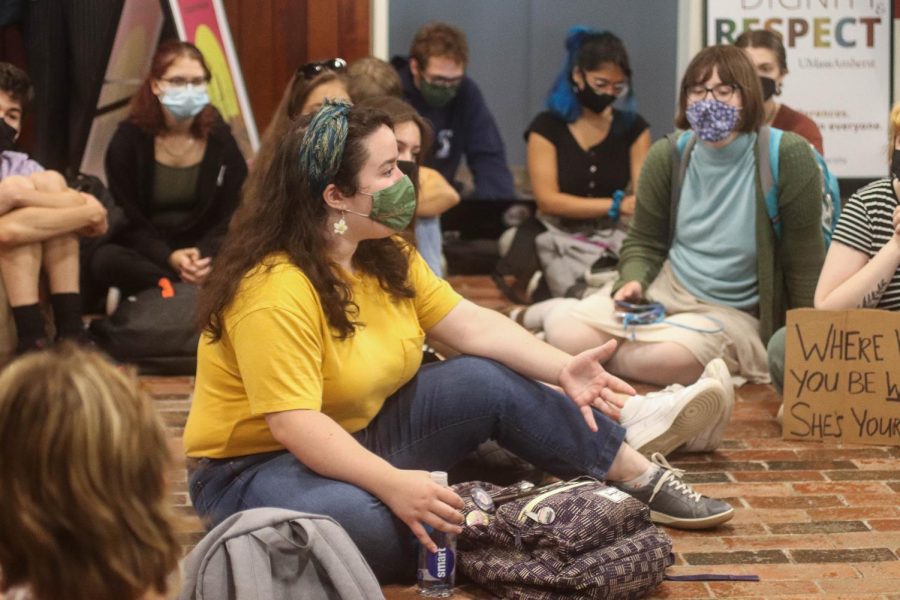 Around 50 students sat on the floor of the Whitmore administrative building on Monday afternoon to protest Theta Chi fraternity after sexual assault accusations surfaced over the weekend.

Students at the University of Massachusetts organized the sit-in using social media platforms like Reddit and Instagram. Those in attendance voiced concerns over the recurring issue of sexual assault in fraternities and administration’s shortcomings in addressing it.

“If [the administration] wants respect from us as students, we want that respect back,” said Skye Reich, a junior and natural resources conservation and sustainable community development major.

The sit-in took place a day after students gathered outside the Theta Chi fraternity in protest. Students reflected on the vandalism and property damage that occurred the prior night and the reaction from law enforcement.

“I understand the anger and I understand why the property was destroyed, but I think that people like Subbaswamy will use that to delegitimize what we do. So I would just urge people to remain peaceful so that doesn’t happen. So It doesn’t take attention away from the cause,” Reich said.

The group collectively came up with a loose list of demands that included disbanding Theta Chi, launching an investigation for each member of the fraternity, punishing those found guilty with expulsions and instating the Survivors Bill of Rights.

Many also demanded that the University administration acknowledge the accusations that were surfacing. This Monday, after the sit-in had ended, an email from UMass Chancellor Kumble Subbaswamy was sent to the campus community, stating: “While we respect and support a survivor’s decision whether or not to report an assault or pursue sanctions, we cannot take action against alleged perpetrators, whether they be individuals or organizations, without actionable evidence.”

“Don’t risk your safety. If it gets dangerous, go home and come back next time,” said Bella Warner, a freshman political science major.

Reich said, “[Sexual assaulters at fraternities] need to be removed from the premises. They’re not keeping the campus safe. It makes us all feel unsafe.”

Since Sunday, a Change.org petition calling for the fraternity to be shut down has gained almost 18,000 signatures. The petition accuses Theta Chi of involvement in “several sexual assault allegations.”

“[Fraternities] pray on the naivety of freshmen and sophomores,” said Maria Harris, a sophomore public health major. “If you’re a freshman or sophomore, you’re not old enough to drink at a bar. You’re going to want to go to the place where everyone else is going, where all these cool upperclassmen are.”

“It’s moving to see so many men and male presenting people showing up in solidarity,” Cares said.