‘The Chair’ reflects a balancing act experienced on college campuses 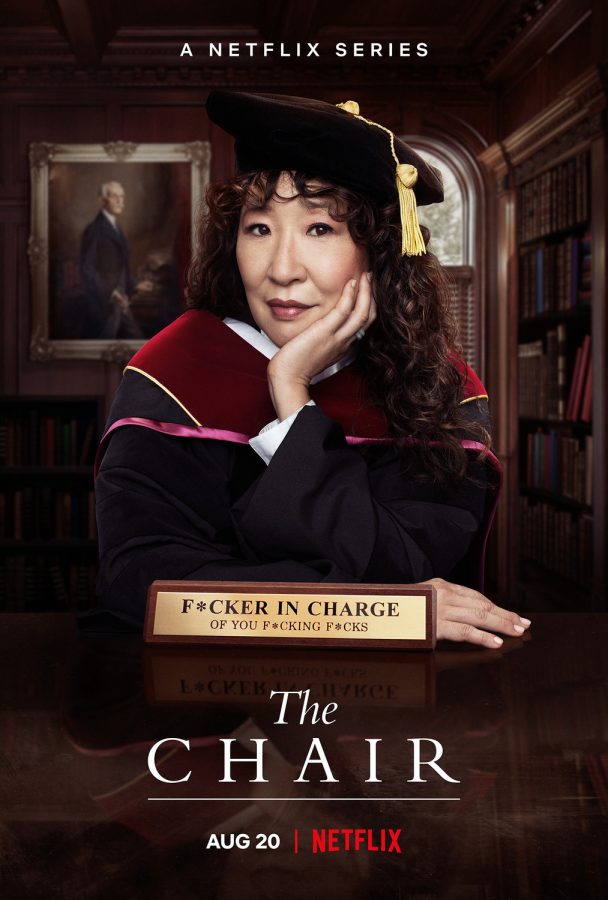 “The Chair,” a Netflix original series that premiered on the streaming platform on Aug. 20, arrived just in time for the new school year. Students and professors returning to campus will undoubtedly grapple with issues involving racism, sexism, ageism and the limits of free speech, all topics explored in the show’s six, 30-minute episodes.

In “The Chair,” Dr. Ji-Yoon Kim (Sandra Oh) is the first woman and first person of color to chair the department of English at Pembroke University. When the department faces budget cuts, Kim is pushed to let go of the three older male professors who receive the highest salaries, despite their low enrollment. If she doesn’t do so, the department could go under.

“I don’t feel like I inherited an English department. I feel like someone handed me a ticking time bomb because they wanted to make sure a woman was holding it when it explodes,” Kim says.

She is responsible for managing this fragile department on top of caring for her struggling adopted daughter.

The relationship between Kim and her elderly counterparts is a central point of tension in “The Chair.” The men refuse to accept that their dry lectures are not engaging to a young audience, and they’re reluctant to embrace the changes brought by Kim and Dr. Yaz McKay (Nana Mensah).

McKay’s classes are exciting. Students laugh, actively participate and use music to present their ideas about readings. It’s a sharp contrast to the stale environment created by the other English professors, and yet when Kim offers McKay Pembroke’s distinguished lectureship, the Dean objects. He thinks inviting actor David Duchovny would be a better way to boost enrollment. Despite her overachievement, McKay is passed over for opportunities — a common experience for women of color. Kim and McKay agree that without them, Pembroke would be nothing but a name, founded by people who got rich off of the labor of people of color.

Kim must also manage the wrongdoings of her colleague and love interest, Bill Dobson (Jay Duplass), who is self-destructive after losing his wife. Students film Dobson engaging in a Nazi salute during class, which sparks protest and chants of “No Nazis at Pembroke.”

The conflicts at Pembroke may sound familiar to students and faculty at the University of Massachusetts. Similar to the fictionalized Pembroke – and universities across the country – UMass has experienced a sharp decline in humanities students, as undergraduate enrollment in the English department fell nearly 50 percent from fall 2011 to fall 2020. The faculty members at both Pembroke and UMass are also overwhelmingly white; the share of minority faculty members at UMass has risen only four percent in the last decade.

Alongside the statistics, “The Chair” reflects the debate over antisemitism and free speech on college campuses. In December 2019, a UMass accounting professor was removed from teaching after showing her class a parody video of the 2004 film “Downfall,” which explores Adolf Hitler’s final days in his Berlin bunker. The parody, an example of a successful extra credit project from 2009, features accounting-related subtitles dubbed over Hitler’s voice and references the gas chambers used by Nazis throughout the Holocaust.

Former students claim Professor Catherine West Lowry showed the video in class in years prior. Lowry failed to contextualize her most recent viewing with the rise of antisemitism on campus and across the country. Earlier that semester, five swastikas were drawn on the walls of the UMass Fine Arts Center.

During Dobson’s hearing in “The Chair,” Kim asks the board, “What do you think is going to happen when he is fired and nothing else changes?” She acknowledges that Pembroke’s broken culture will persist with or without Dobson.

After breaking her neutrality at the hearing, Kim is removed as chair. The same is true of UMass; while Lowry was barred from teaching Accounting 221 for the remainder of the fall 2019 semester, antisemitism on campus did not end. Four months later, the UMass Hillel House was vandalized on Israel’s Holocaust Remembrance Day.

“The Chair” is a fitting look at the tensions of modern academia and offers stories that can be found in every college department this year, including at UMass. Netflix has yet to announce whether “The Chair” will return for a second season.