UMass gets back into the win column, defeating Davidson 4-0 on Friday 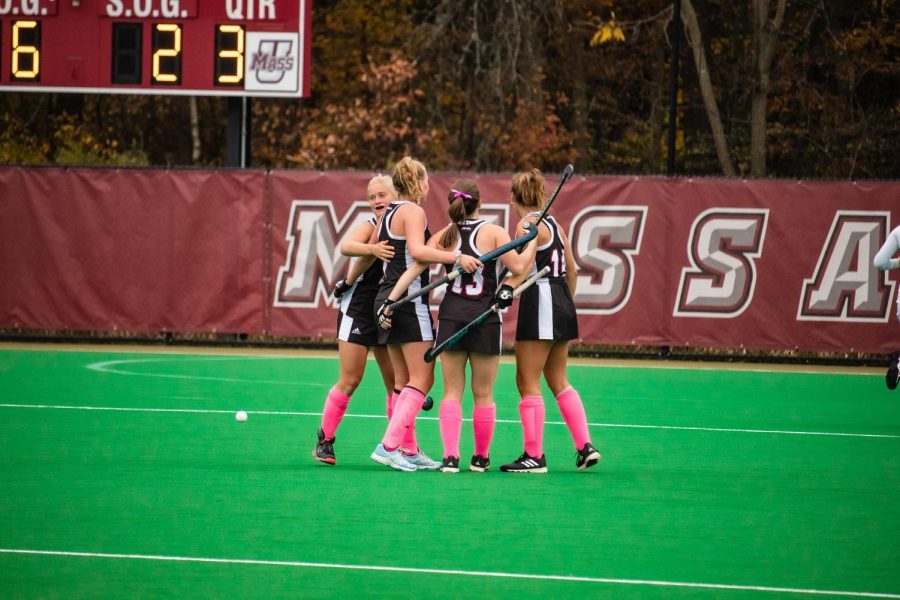 The sound of the opening whistle signaled the beginning of Atlantic 10 play for the Massachusetts field hockey team, who bounced back from a tough weekend in Maryland and defeated Davidson 4-0 on Friday.

“[For] a conference opener on the road I thought the team performed really well,” head coach Barb Weinberg said. “Once we started to open up the scoring and had a little bit more poise on the ball, we were playing some real good hockey.”

Izzy Acquaviva kickstarted the goal scoring and provided a first quarter tone-setter for the Minutewomen, dancing along the end line with the ball before burying it from a low angle straight past Davidson goalkeeper Cato Roell and into the back of the net. The Sophomore hasn’t appeared on the scoresheet since UMass’ season opener, but her ball possession skills have been on display in every game.

“Anytime you have a younger player that has improved to the extent that Izzy has, she’s been key in our midfield to keep our legs fresh,” Weinberg said. “For her to up her game and be able to play in the midfield against some of the best teams in the country she’s done a fantastic job of stepping up.”

Acquaviva was just one piece of the 60-minute onslaught of offense by the Minutewomen though. Mus Defauwes scored once and Bella Ianni found the cage twice, including a last second penalty stroke goal. In total UMass attempted 20 shots on Friday, with 13 of those shots on goal, and came alive particularly in the second half.

On the other side, Davidson’s offense was unable to get anything going for the majority of the game. The quiet night for the Wildcats spoke volumes about the stifling Minutewomen defense, determined to give their goalkeeper Marlise van Tonder an easier time in net than she had in the last few games.

UMass only allowed Davidson to attempt five shots, only two registering as shots on goal. When compared to the Minutewomen who saw the ball go into the net five separate times — Georgie McTear scored a penalty stroke goal that was disallowed — the contrast is significant and can be credited to UMass’ ruthless aggression in its defensive third and lengthy ball possession in its middle third.

“Fantastic,” Weinberg said of the defensive unit. “In the third quarter Davidson was able to create a couple scoring chances and for us to be able to deny two opportunities when we were up two nil … a 2-1 game is completely different so great defensive effort.”

The Minutewomen’s most complete game of the season came at a key moment, as they earned an important first conference victory. Every A-10 matchup has potential postseason implications, and the games become tougher as a result. But by putting away the Wildcats with ease, UMass gained some confidence in conference play, and overall reinvigorated itself after two straight losses prior to Friday.

The Minutewomen will look to close out its weekend strong against a tough opponent in No. 15 Wake Forest at 12 p.m. on Sunday.

“Wake Forest is a really strong opponent, they’re athletic and quick all over the field,” Weinberg said. “For us having the confidence from last night going into this game is huge and we have to be prepared.”