31 transfer students are key for the Minutemen 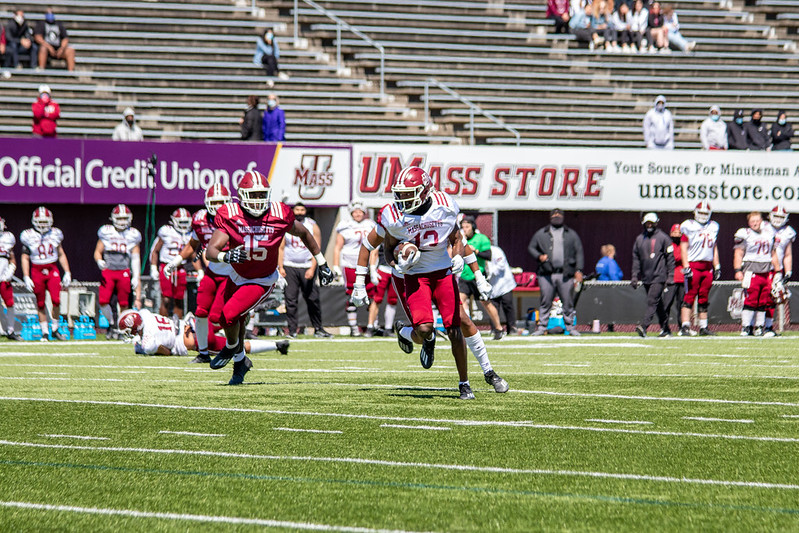 The Massachusetts football team starts its season this Saturday as 38-point underdogs against Pittsburgh. UMass will look for any sort of improvement after their 0-4 2020 season and is seeking its first win in 707 days (Sept. 28, 2019 vs. Akron).

Head coach Walt Bell announced transfer quarterback Tyler Lytle has earned the starting role for week one. Lytle transferred from Colorado with two years of eligibility remaining. His preparation has been constant regardless of his role, but he’s excited to start for the first time since high school in the face of Pittsburgh’s tough defense.

“I’m working just as hard in terms of film, knowing the gameplan, watching film with coach Bell and coach Walker. Just elite preparation going into this week,” he said.

Bell isn’t concerned about the lack of reps Lytle had during his time in Colorado. Despite having only 13 college pass attempts under his belt, Bell trusts the work he’s seen over the summer and believes in his ability to play under tough weather conditions.

“Tyler’s played in games, you know he’s played in inclement weather,” Bell said. “He’s been out there and played football, so I’m excited for him more than anything else.”

The Panthers’ defense has built a solid reputation over the years, and this season should be no different.

“Both teams are going to play really hard,” Bell said. “From a hard downhill, really aggressive standpoint, we’ve got to be sharp. Especially with them on defense, they haven’t really changed very much in 10-15 years and they’re really good at what they’ve done.”

Earlier this month, Bell called this year’s defense “the best group of defensive personnel since we’ve been here” in an interview with the Daily Hampshire Gazette. He pointed to the 16 defensive backs on scholarship and said he feels great having this much time to prepare following the rushed, ill-prepared and stunted 2020 season.

This is the first time the two teams have met, but there are some connections between the schools. Play calling for the Panthers’ offense is Mark Whipple, the all-time wins leader for UMass. Head coach Pat Narduzzi is entering his seventh season, sporting a 42-34 all-time record. Bell, staring at a meager 1-15 head coaching record, had high praise for his opponent.

Bell said he thinks a primary difference between this group and years past is the maturity level. Though still a young team in some spots, they have a chunk of returning players and Power 5 transfers that Bell said adds maturity to the team, and especially in the opening five minutes.

Even if UMass doesn’t miraculously overcome the 38 points they’re projected to lose by, the season opener offers an opportunity for optimism. With a litany of new faces, there’s a real chance that the Minutemen can at least improve on the 50 points allowed they’ve averaged over the past two seasons.