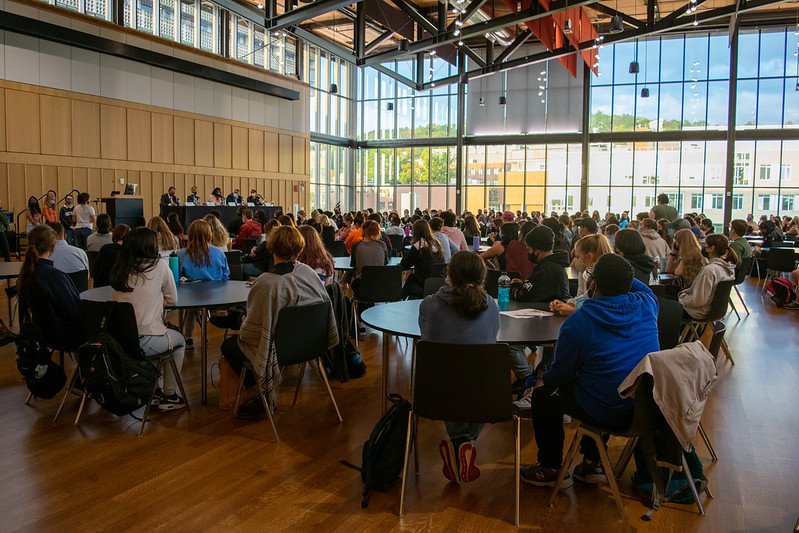 A panel of administrators at the University of Massachusetts hosted an open forum Tuesday on sexual assault in response to allegations that arose against the Theta Chi fraternity last week. Around 200 students attended the event, filling the Student Union Ballroom. The students voiced concerns about the reporting process for sexual assault, recent racist events and the overall presence of fraternities at UMass.

In his opening remarks, Chancellor Kumble Subbaswamy announced a three-step initiative to improve the campus’s response to sexual violence.

The first step he announced was that the University will work to adopt “a version” of the Survivors Bill of Rights, an initiative that the Student Government Association has been working to get implemented since 2015.  Subbaswamy specified that the modified version will be “in line with federal and state law.”

The second step that the University will take is to hire an outside firm to facilitate a review of “any reports of sexually-based misconduct – regardless of what office they came into – going back seven years,” Subbaswamy said.

“Based on the findings from the review, we will take very specific steps to combat said behavior,” he said. When asked to elaborate later during the event, Subbaswamy failed to explain what the specific steps might be.

Finally, Subbaswamy explained that the University will work with a sexual assault prevention consultant who “will do an assessment of the culture in every aspect of University body and offer ideas on how we can create a safer and more respectful environment.”

He added that the firm will be set in place within the next four weeks, after which the University will post updates on the progress of the review on the University’s Title IX website.

Students voiced their concerns to the panel through microphones at either side of the stage, waiting in long lines to speak.

In addition to discussions of the problem of sexual assault at UMass, students also expressed their outrage regarding a racist email that was sent to Black student organizations in mid-September. In the statement by Chancellor Subbaswamy, he announced that the University had hired a cybersecurity firm this week to try to track down its sender.

“Please do not make the mistake of thinking this is an abnormality,” junior biology major Jordan O’Hare Gibson said during the event. “This happens every year,” he said, referring to racist incidents on the UMass campus.

UMass plans to create a Black Advisory Council, comprised of students and faculty, which will develop “recommendations to the Office of Equity and Inclusion that will improve the experiences of Black students, faculty and staff on campus,” according to the statement from Subbaswamy, which was sent to the student body on Monday.

Some students are not confident that conditions will improve.

“I felt so incensed. I felt so angry,” said Zach Steward, a junior legal and Afro-American studies major. “They’ve created councils before, and those councils haven’t done s—.”

While the forum was open to the public, the University did not publicly announce it. Instead, they sent an email to a select few student organizers the day before the event, who took to social media to spread the word.

At the forum, students requested that the University hold another forum and send an email to the entire campus community several days in advance. Additionally, many were unable to address administrators due to time constraints. The panel of administrators did not agree to this request.

A small group of organizers at the forefront of the movement to address sexual assault at UMass will meet with Vice Chancellor LaBanc on Wednesday to discuss further actions, including “Explain the Asterix – Hampshire County,” an Instagram account about helping and supporting students in Hampshire County with sexual assault.

“Transparency is very much at the forefront of our intentions. Processes like this require a lot of negotiation and conversation,” said organizer Anika Nayak, a sophomore majoring in women, gender, sexuality studies.

“It’s clear that a lot of students want to tell them their experiences and have administration forced to be confronted with things that have not worked for them,” said organizer Clare Sheedy, a junior majoring in public health sciences and women, gender, sexuality studies.

“While steps are being taken to fix issues on campus, I hope that there are more forums like this, more instances where students and faculty can be transparent with each other,” Gibson said.

Zoe Lee-Davis, a sophomore art major, said, “I think most of their responses were very vague. I think they all came in here with not enough information about what’s going on in their own campus. And just basic information about Greek life.”