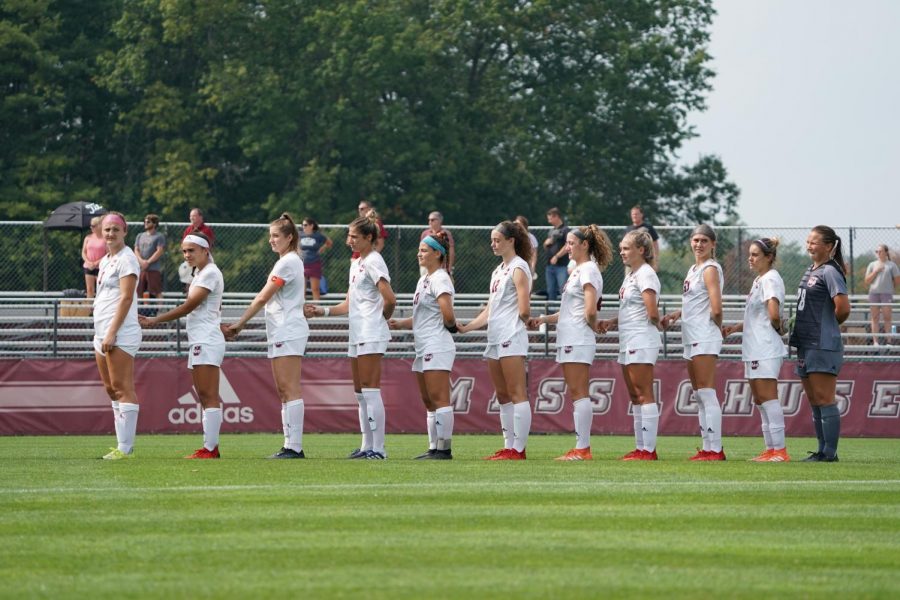 After a 1-0 win against Yale on Wednesday, the Massachusetts women’s soccer team will travel to Duquesne and play its first conference game of the season.

UMass (4-2-2) is on a six-game unbeaten streak and is looking to claim its first conference win. Duquesne (2-3-1) aims to break its two-game losing streak after falling 4-0 on Sunday against Buffalo.

“The last few games have been battles that we’ve in some ways put ourselves into,” UMass coach Jason Dowiak said. “And now playing against conference opponents that have a clean slate, so to speak, and everything is there for the taking for everybody, it’s going to get that much more competitive, that much more intense. So just being mentally ready for that for this young group.”

The Minutewomen recorded a win in their last matchup against the Dukes in 2019 thanks to two second half goals.

With the second half of the season remaining and Atlantic 10 play beginning, the competition is only going to get harder. UMass is looking to get more of a push on the offensive end and get more movement in the early moments of the game.

“I think the play and the response to Yale coming off of, probably our worst game against Northeastern, was awesome,” Dowiak said. “The goal would be to continue to have a quick start and get a goal in the early part of the game, but to also take even more control of the game early on.”

Out of the 11 goals scored this season, only three have come in the first half. A trend for the Minutewomen throughout their games has been starting slow but coming out stronger in the second frame.

“I think we have improvements to make, but that’s for every team,” goalkeeper Megan Olszewski said. “We’re definitely excited to go to Duquesne and play. I think we’ll obviously, definitely be ready.”

Olszewski has started the last five games, recording 23 saves this season and has played a vital role in the success for UMass. She stresses the importance of the team maintaining high intensity throughout the entire game and stepping out on the field ready to play.

At the start of the season, the Minutewomen’s roster added 12 new players: 10 freshman and two sophomores. Dowiak has shown no hesitation in starting the younger players for UMass. While there are still areas to improve upon, the newcomers have showcased depth and talent on the field.

Through the condensed spring season due to COVID-19, UMass succeeded in conference play coming away with five wins, two losses and one draw. Dowiak and the Minutewomen will be looking to advance to their fourth consecutive A-10 Tournament this year.

“Conference games are always really tough,” Dowiak said. “Especially the first few because everybody has a chance. That’s what we just talked about, is the importance of getting the first conference win under our belt.