Wallows releases new single “I Don’t Want to Talk,” and announces a 2022 tour 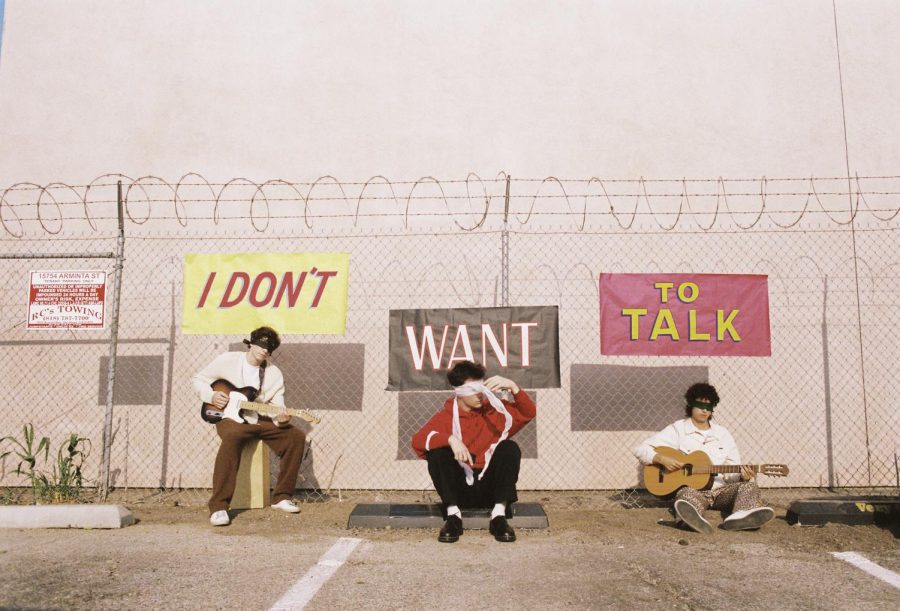 California indie rock trio Wallows released their new single, “I Don’t Want to Talk,” along with a music video and a 2022 tour announcement on Thursday.

Following the release of their EP “Remote” in February 2021, Wallows takes a step back in time with their latest single, giving loyal followers a taste of their “Nothing Happens” and “Spring” EP era. “Nothing Happens,” Wallows’ debut album, was released in March 2019. “Remote’s” sonic style of techno beats and vocals prescribed a new era for Wallows while “I Don’t Want to Talk” gives a more nostalgic nod to “Spring,” their debut EP.

“I Don’t Want to Talk” has a similar sound to “Pleaser,” a single released in 2017. With layered vocals from lead vocalist Dylan Minnette and lead guitarist Braeden Lemasters and a poppy undertone, the song is filled with catchy lyrics with upbeat delivery.

The song’s fast drumbeat introduction transitions right into Minnette singing, catching your attention right away. A thick guitar beat and harmonica in the background add a blissful vibe to melancholy lyrics. The song falls between an upbeat indie bop and a heartbreak anthem. Angsty lyrics such as “tell me that it’s over,” and “I don’t need comfort…I don’t want to talk,” are contrasted with a positive instrumental pattern embodying the classic Wallows vibe. “Pleaser” plays into a similar sound but strays away from melancholy lyrics like “I Don’t Want to Talk” has. The latest single is the first collaboration with producer Ariel Rechtshaid, who has worked with artists such as Adele, Haim and Vampire Weekend.

“I Don’t Want to Talk’ is ultimately a song about insecurities,” Minnette said in a press release. “Not only in yourself, but in this case, particularly in a relationship. It centers around the fear of being away from someone for too long and that ultimately allowing the other person’s head to be turned by someone else, and instead of expressing those fears, completely shutting down and not wanting to talk about it at all.”

So much of the beauty in Wallows’ storytelling abilities comes with their ability to create addictively sad yet relatable songs. With platinum single, “Are You Bored Yet,” featuring Clairo, Wallows plays into the same concept of describing parts of a relationship that may be unsatisfying or disheartening in a way that does not completely mellow out your mood.

The video, directed by Jason Lester, strays away from more recent Wallows visuals. The band is known for high quality music videos  involving animation and visual effects. Instead, the video goes back to 2019 Wallows music videos with a simple, yet thought-out visual story. The warm color tones throughout the entire video along with the vintage visual concepts create an effervescent video that could be called true “Wallows vibes.”

From shots of the band dancing or playing instruments, to dramatized movements in tune with the lyrics, Wallows creates a story of insecurity and denial in relationships. With moments such as Minnette refusing to talk on the phone or holding up cue cards reading, “I don’t want to talk,” Wallows presents a playful take on relationship troubles.

Following all of their new audiovisual content, Wallows is hitting the road for a tour beginning on April 1, 2022 in Seattle, Washington. Fans who are signed up for the newsletter will have special access to tickets and VIP packages beginning Oct. 5. All others will be able to purchase tickets on Oct. 8 at 10 a.m. local time.