A battle till the final seconds puts VCU over UMass, 1-0 on Friday

Minutewomen pick up first loss on their home turf 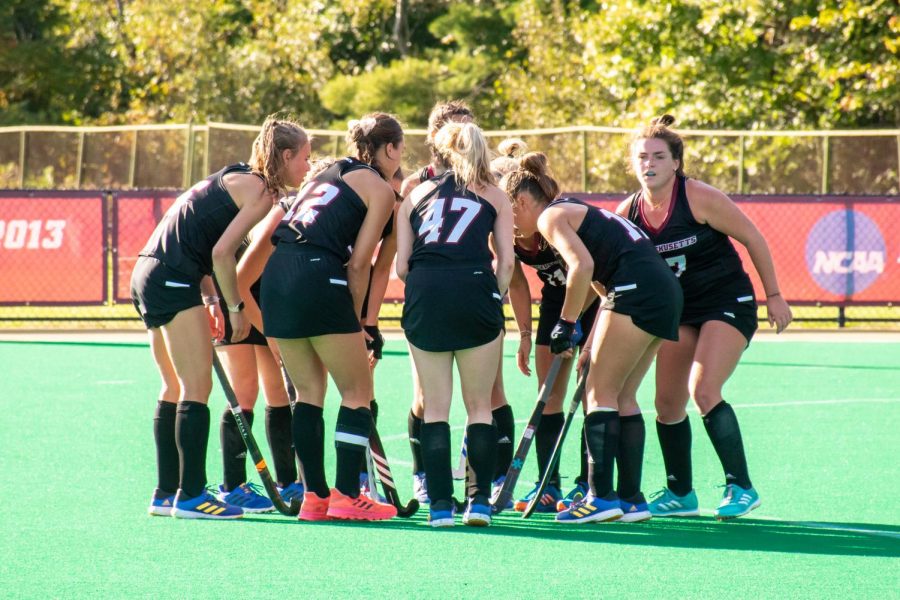 Players on the sideline were shrieking, and the energy was felt from every inch of Gladchuk Field Hockey Complex as the Massachusetts field hockey team took back-to-back corner penalties with under two minutes remaining.

Head coach Barb Weinberg’s visible orchestration walking down the sideline and the UMass (6-4, 1-1 Atlantic 10) team huddle meant all hands-on deck to try to even things out after almost four physical quarters played. But the tale of incompletion on offense plagued the Minutewomen until the very last second, as VCU (6-3, 3-1 A-10) came out on top with the 1-0 win on Friday afternoon.

“It was a great team effort, at the end we were really close and kept pushing and just couldn’t put it in,” sophomore midfielder and defender Claire Danahy said.

In the latter half of Friday’s play, the Rams faced an entirely new UMass team. A night and day difference in level of play for the Minutewomen ramped up the physicality and competitiveness on both ends of the field. UMass was unable to generate success early on and didn’t see the ball get passed many defenders for the two opening quarters. Danahy, who found herself playing at a high level at every field position on Friday, brought a force that mainly put the ball near VCU’s net for the third quarter.

Every time the Rams saw a breakaway opportunity to push the score to 2-0, Danahy’s stick was either swiveling out of the area of a VCU defender or coming in from behind to prevent a forward from finding success.

“We were a little bit slow at the start and played very safe, having a bit of trouble breaking lines through the midfield,” Weinberg said. “When we started to play forward, our speed and our ability to break lines and actually generate attack was very, very good. I’m proud of the team’s performance especially in the third and fourth quarter.”

To start Friday’s conference contest, junior Steph Gottwals and junior Bella Ianni’s chemistry on the right side of the field was off. Two plays in a row, an overshot pass or cut to the wrong side stopped the flow of the ball towards the VCU goal. UMass began playing it safe by passing the ball back towards Minutewomen defenders instead of attacking the Rams head on. The lack of movement in a productive direction prevented UMass from what could have been a game tying goal or penalty corner opportunity.

“The structure we are going to use to actually play the ball forward,” Weinberg said of her halftime instructions. “Through their lines rather than always playing the safe pass back and just building the confidence a bit that they have the possession skills to be able to do that.”

Once the third quarter came to be, UMass stepped on the gas and things began to click. It was just the final step that it needed that didn’t come to be to tie things up.

Just under four minutes remaining, a yellow card given to VCU and the choice to pull Marlise van Tonder from the net gave the Minutewomen a two-player advantage. A crisp, textbook through pass to freshman Dempsey Campbell in the waning minutes gave her an open look at the net but like almost every other shot that day, it was just the slightest bit wide. The hungry UMass crowd that had been smelling a goal for the entire second half sat back down empty handed.

“We knew we needed to come out of the half strong and really get them on their heels,” Danahy said. “I think we did that we just couldn’t get it in the back of the net.”

UMass outshot the Rams 7-4 on the day. VCU just knew how to sneak it into the net. Janne Weztel’s second quarter bullet off a corner penalty ended up being all the Rams needed to head back home with a big conference win.

“This is a type of a result that always hurts because you feel like you had a really strong performance and out-statted your opponent,” Weinberg said. “Credit to VCU, [it] played a really great game and their defense held really strong, so we have to take the process out of this result rather than focusing on what the result is.”

A mad scramble to find a last-minute miracle sent the Minutewomen flying all over the field, but like VCU defense did all game, it cleared the ball down the field, putting the nails on the coffin of a hard-fought win.

“It’s a big A-10 game, it’s a tough loss but just building off this game and coming back Sunday,” Dahany said.

Things don’t get easier from here. UMass takes a break from conference play only to face No. 10 Boston College on the road on Sunday. Game is scheduled for 1 p.m.