Huskies to be without head coach vs. Minutemen Saturday 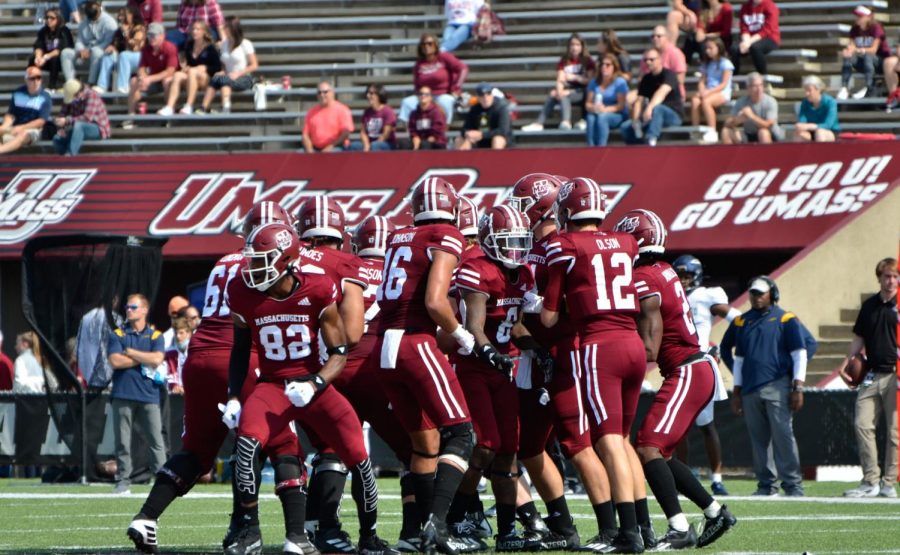 Friday morning’s news pertaining to the positive COVID-19 cases for the University of Connecticut adds yet another wrench into its matchup against the Massachusetts football team. Interim head coach Lou Spanos, offensive coordinator and offensive line coach Frank Giufre and senior starting left tackle Ryan Van Denmark will not be in Amherst Saturday. The Huskies (0-6) will rely on defensive line coach Dennis Dottin-Carter to serve as the temporary head coach against the Minutemen (0-5).

What does this mean for the Minutemen?

Most importantly, winning this game has become a requirement. UConn was competing in close games against other lower-end teams such as Wyoming and Vanderbilt. Spanos looked to have turned around what was the consensus worst team in college football.

Walt Bell and UMass quickly claimed back that title after losing 45-7 to Toledo, not looking anything like it did against Boston College or Eastern Michigan. Now Bell has no excuse to lose this game, the Huskies have their backs pinned to the wall late in the week and must try and adjust quickly. A loss for the Minutemen against a scrambling UConn team will look far worse than any other loss they’ve had this season.

This also means the defense has an opportunity. It may not seem like it, but the Minutemen’s defense was not horrendous against the Rockets. The offense was consistently placing Toledo’s offense in great field position, leaving the defense with no margin for error. An already bad Huskies offense now is without its starting quarterback and left tackle, and UMass’ defense that has three sacks and zero interceptions on the year has a perfect opportunity to help pad those statistics.

Bell and starting quarterback Brady Olson need to bounce back. Seven points after putting up 28 against both Boston College and Eastern Michigan is a massive regression. Now they are tasked with the worst FBS defense they will see all season. UConn ranks bottom-10 in points per game and bottom-20 in yards allowed per game. For reference, Boston College is No. 35 in points allowed per game and No. 45 in yards allowed.

If anything less than 30 points are on the board for UMass, it should be considered a bad day.  This offense has proven itself enough this season that anything less than that would mean that the Minutemen are easy to figure out and prepare for. Granted Bell does not have much to work with, but against a bottom-two team in the nation, that should not be a problem.

The Huskies were on an upward trajectory, but losing key coaching and your most important lineman is massive. Dottin-Carter hasn’t served as a head coach since 2016, when he was an interim at the University of Delaware for five games, in which he went 2-3.

Bell knows the implications of this game and now with the Huskies forced to scramble last-minute, he needs to take advantage of the opportunity.