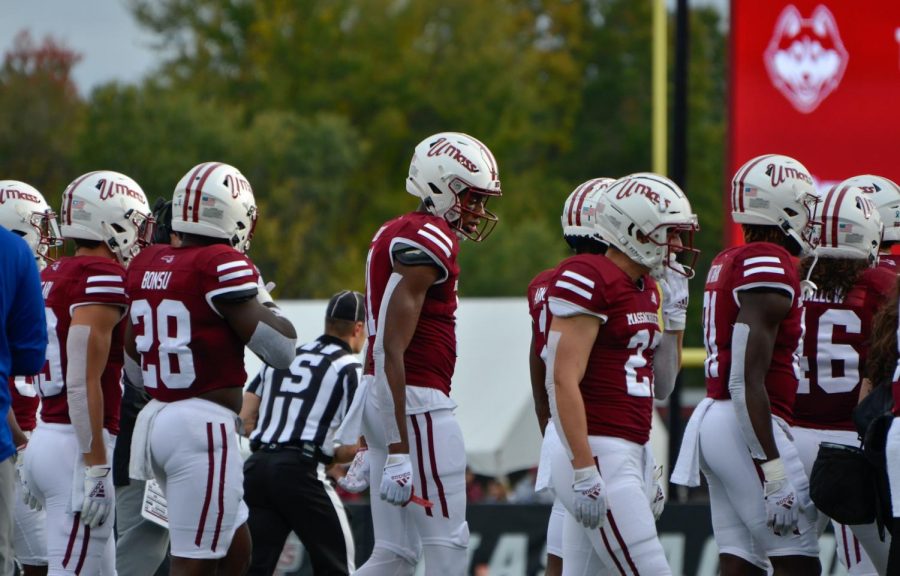 The Massachusetts football team is no stranger to getting off to slow starts offensively. The Minutemen (1-7) have only scored a total of 10 first quarter points across eight games this season.  Against Liberty, UMass continued its trend of starting out sluggish on offense, turning the ball over twice over the course of its first four offensive plays.

After digging themselves into a 14-0 hole with 13:40 remaining in the 1st quarter, the Minutemen offense was able to bounce back, putting together a nine play, 55-yard drive that ended in a Cameron Carson 38-yard field goal. Carson’s field goal resulted in the only points for UMass in the first half.

From the very beginning of the game the Minutemen made things difficult for themselves, as they set up the Flames offense with great field position. The very first play of the game saw Brady Olson throw an interception which set up Liberty on UMass’ own 26-yard line.

On UMass’ ensuing drive Olson turned the ball over again, this time fumbling as Flames’ Aakil Washington knocked the ball free. Liberty recovered the ball at the UMass 6-yard line.

Olson only threw one interception on the game, but he could have had more, as a number of his throws were into heavy coverage. The Flames defensive backs bailed out Olson numerous times throughout the game by dropping would-be interceptions. Olson completed 9-25 passes for 74 yards and a touchdown.

With the game well out of reach Olson delivered a 30-yard touchdown pass to Rico Arnold who beat his man clean off the line. The Olson to Arnold touchdown was a welcome sight to see because Arnold has not been involved in the offense that much as of late.

Despite the 62-17 loss, Ellis Merriweather had a bounce back game after only rushing for 1 yard against Florida State. Merriweather on the day ran for 149 yards on 24 carries, which marks the third time this season that he has surpassed 140 yards in a game. In the second quarter Merriweather appeared to have 47-yard touchdown reception as Olson hit the back on a wheel route down the sideline. Ultimately the play was called off due to offensive pass interference.

“Ellis [Merriweather] catches the ball well and he’s really good when he’s got the ball in his hands,” said UMass coach Walt Bell. “So, we’re going to do whatever we have to do to make sure he’s getting the football.”

Merriweather was the lone bright spot for the UMass offense today and is one of the only players on offense who has solidified himself as a go-to guy. The lack of weapons on offense makes it difficult to establish consistent production as well as an identity.

“From and identity standpoint, the identity is to be balanced,” Bell said. “We are going to do whatever we have to do to put ourselves in a position to play well.”

The Minutemen will look to get back on track as they head back to Amherst to face off against Rhode Island on Saturday.