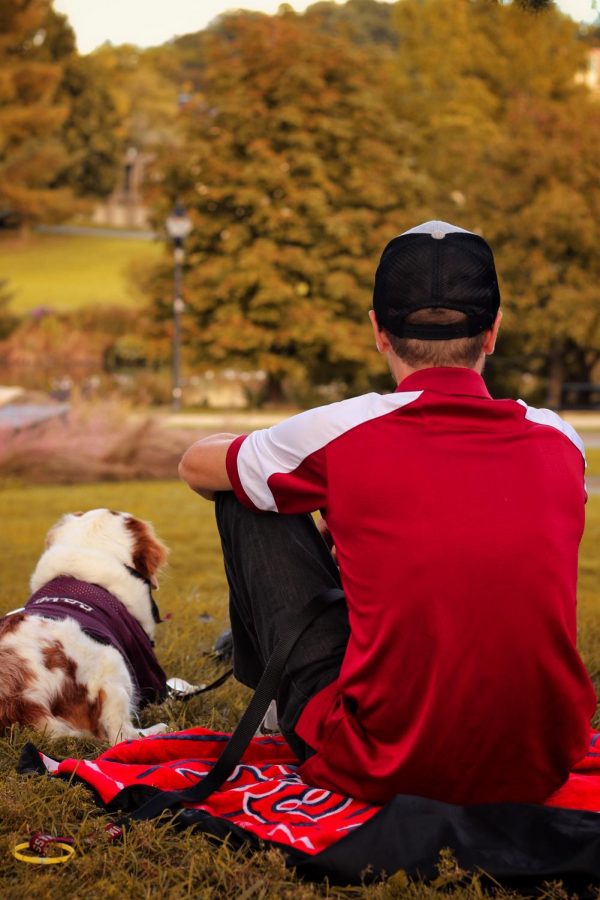 You have probably seen his furry face before. If you’re lucky, you’ve met him in person.

Comet the Brittany Spaniel, known to many as @goodboyoncampus on Instagram, has built quite the fan following in the short weeks since classes have started in full swing at the University of Massachusetts. Students, professors and staff alike have enjoyed his adorable presence at events, sports games and more.

But for those returning to Amherst this semester, they came back to a new “Good Boy” on their campus.

AJ, the original dog featured on the iconic Instagram page, passed away in April 2021. He left behind a doggy sized hole at the University that only his brother Comet could fill.

“He’s doing a really fantastic job, he’s a pleasure to work with,” Michael Jamrog, the owner of both dogs and the man behind the Instagram page, said.

“Having him continue what his older brother started is really, really special.”

Comet’s assumption as the mascot of @goodboyoncampus marked a huge change in the trajectory of the Instagram account.

“This account was really focused on the dog modeling and all that sort of stuff online. But there is a huge aspect to it that I didn’t really acknowledge that much, which was simply meeting people in person and giving the community a dog that they’re allowed to approach and pet and interact with,” Jamrog said.

He took in AJ from his uncle after he passed away just before the start of his sophomore year.

“My uncle was actually a UMass alumnus. If he knew about all of this, he would probably be so psyched that his dog turned into the icon that he did. He always told me how much I would love UMass,” he said.

Jamrog had the spaniel registered as an emotional support animal, allowing him to live in the dorms. He had no idea that his dog would become a micro-celebrity when he snapped a photo of him in a UMass scarf on the snowy campus in 2019.

“I never really focused on photography on the campus until that day,” the fifth-year plant and soil sciences major said.

“It’s always just kind of been steadily going up and up and up and up for the last three years,” he said regarding the account’s follower count. Today, @goodboyoncampus has over 7,800 followers on Instagram.

AJ became a brand ambassador for the UMass Store not long after the account began picking up speed, posing in University apparel in various scenic spots on campus. In fact, the UMass Store custom-made AJ’s iconic jersey.

“It was always about AJ. It was never really about me,” Jamrog said. “It felt like it was AJ’s account. And I was just there.”

With the greater account growth came greater opportunities for photos. As any dog owner could tell you, taking picture-perfect shots of your furry friend is not always easy. Jamrog recognized the need to reinforce his dog’s training to keep things going smoothly.

“We started doing [training] a lot more once the account was taking off,” he explained. “I was like, ‘Okay, this is something I’m really enjoying. We’re going to b

e doing this a lot. So we need to make sure you’re really going to listen to me during it, or else it’s just going to be stressful.’”

“The more we did it, the more natural it was, and the easier the pictures were,” he added.

With Comet in the spotlight, Jamrog has been able to continue holding meet-ups with the UMass community through @goodboyoncampus. The pair has been busy on campus, having just recently performed in the Student Performance Showcase and attended the football game tailgate.

With all the work that comes with running @goodboyoncampus, Jamrog emphasized the importance of returning to events in-person with his dog this semester.