Kesin: UMass ends the season with a win but needs to keep the ball rolling into post season 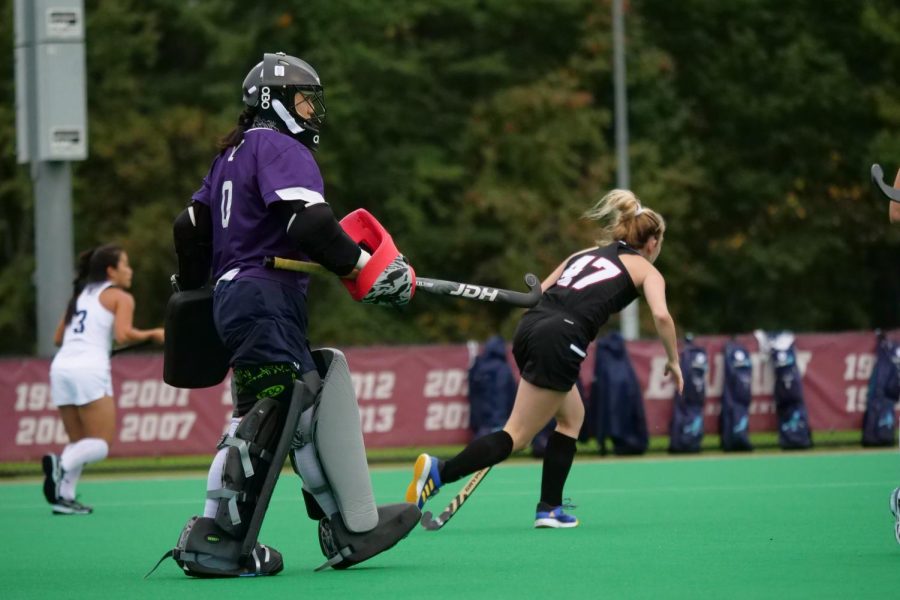 From the start, No. 18 UMass (13-5, 5-2 Atlantic-10) had control of the game. Beech’s goal was the icing on the cake of a well-earned win. After traveling to Pennsylvania on a rainy Saturday morning, an easy win to end the regular season feels as good as it gets. However, if the Minutewomen want to keep the ball rolling into playoffs, there is no room to treat any game or win as easy. UMass hasn’t focused on the opponent much at all this year, that has been its motto. Perfecting the Minutewomen’s own game is more important to them.

Against Lock Haven (5-9, 2-5 A-10) the slow start for both teams is a story that has been told before this season. Sluggish ball movement, failed passes right away and lack of completion on corners wrote the game’s narrative from the start but it didn’t take long for UMass to rewrite the story.

The Minutewomen began normalizing ball movement in the Bald Eagles’ defensive zone keeping goalkeeper Joaquina Orlandini on her toes. What looked like a Steph Gottwals to Emily Crawford goal connection turned out to be Gottwals’ herself punching the first goal in of the day to give UMass the 1-0 lead. Last Sunday the Minutewomen proved that no 1-0 lead scared them as they climbed back to beat Connecticut 2-1 after two overtime periods. That being said, UMass’ typical play style is to score early and maintain the lead as it did Saturday.

In true Minutewomen fashion, another UMass player found success shortly after to extend the lead to a comfortable 2-0. Bella Ianni was the recipient of a gorgeous pass from Sophie Johnson with one minute and 25 seconds to go in the first half. Ianni’s textbook drive into the net secured her fifth regular season goal.

Ianni is a player that often pulls through when needed. Her fair share of hard drives veering just an inch or two wide represent the power she has behind her stick. That energy and relentless effort to score or attempt to will need to shine through come playoff time. Georgie McTear, a catalyst for the Minutewomen at every level, didn’t find goal success on corners against Lock Haven despite plays being drawn for her shot. However, her stick skills and ability to rip through any defensive will also carry UMass come post season, even if she comes up empty on the scoresheet.

The beauty of this Minutewomen team is exactly what head coach Barb Weinberg preaches. There is no one star, and everyone contributes. UMass is that much better when McTear scores but her ability to make a major impact with or without a is like no other. The Minutewomen strive when they play as a unit and with a skilled bench like they have, a deep playoff run means everyone will have to chip in.

With playoffs arriving next weekend, the best thing UMass can do is continue to perfect its own game. No A-10 opponent will be easy, but things will only be harder if the Minutewomen fall back on bad habits. Instead of pushing the ball backwards in a reserved nature like it has before, UMass needs to attack ruthlessly from the start. It has the skillful penalty corner strategies to chip in easy goals and has the versatility to spread the ball productively.

The Minutewomen had some of the most textbook passing against La Salle which was a major contributor to their seven-goal game. Everything was in a forward motion, stick-to-stick seamlessly through any defender. That can happen against any team, even one with a rock-solid defender like Saint Joseph has in Freke Van Tilburg. It comes from UMass being focused and firing every pass with purpose.

Another form of versatility that will complement the Minutewomen well is the types of games they have won this season. Having a game long 2-0 lead cut short in the final seconds against Maine taught them how to maintain a lead going forward. Ugly offense can still come out on top like it proved to against UConn. And more than anything, they proved they are an exceptional overtime team. With uncharacteristic losses like in the game against Richmond and heartbreaking empty-handed games like against Virginia Commonwealth, UMass comes into the A-10 tournament prepared to see anything.

With one of the best goalies in the A-10 in Marlise van Tonder and a defensive unit with players like Josie Rossbach, Claire Danahy and Johnson, the Minutewomen’s back end will be on lockdown.

UMass gets the No.3 seed in the upcoming A-10 tournament, let’s see what the Minutewomen do with it.