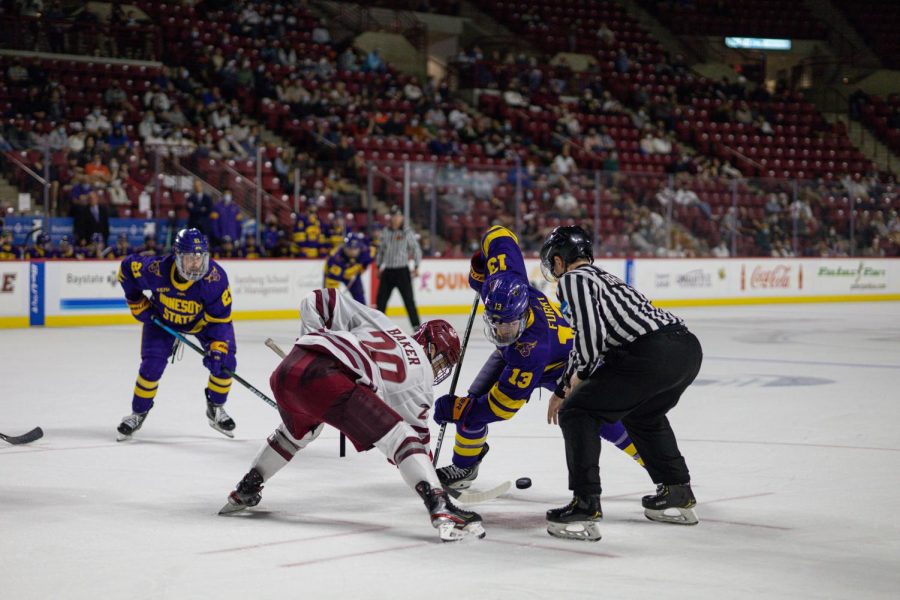 An 0-2 start was certainly not what the Massachusetts hockey team hoped for coming off its national championship win last season — even if the losses were to another top-5 team in the nation.

Every strength No. 1 UMass developed towards the end of last season seemed to show up more as a weakness Saturday night. There was no net presence offensively, the defense gave up too many odd man rushes and special teams were underwhelming.

“We did not play close to our identity,” Minutemen head coach Greg Carvel said after Saturday’s performance.

That same UMass team took the ice 18 hours later and took a step closer towards its identity, but a third period implosion signals how much work still needs to be done before the Minutemen take the ice again on Oct. 15.

Defense has been the hallmark of UMass’ past few years of elite play, and with three new players across the pairings that high-level defense was sorely lacking over the weekend. The Minutemen let in six goals on Sunday, a game total they haven’t allowed since the second weekend of the 2020-21 season where they lost 6-3 to Boston College.

Even more troubling was how quickly UMass lost control on Sunday. The team dominated possession during the first frame and played a relatively strong second, but let in five goals in the third period, which is typically the frame in which the Minutemen are more dominant through their conditioning. UMass started to lose puck battles in front of its own net and along the boards in its defensive zone, giving up second chance opportunities that Minnesota State capitalized on.

On top of that, special teams continued to struggle for a second straight night. The Minutemen found themselves on the powerplay five times on Sunday. And just like Saturday, UMass failed to generate a solid scoring chance on any of them and only attempted four shots.

Playing defense, executing on special teams and utilizing their depth won the Minutemen gold last season. And inability to execute in those areas will hinder their success this winter.

Make no mistake, a heavyweight matchup against the No. 5 team in the country on opening weekend was no easy task. Carvel made sure to note there were no excuses for dropping the first two games of the season, but the Mavericks are an older, stronger and more experienced team right now than UMass is. This weekend was a measuring stick that exposed the Minutemen’s glaring weaknesses, but with that come a few positive takeaways based on the success that they did have.

For one thing, net presence was vastly improved on in the second matchup on Sunday. Particularly in the first period, UMass put big bodies on the net and won battles to earn a lead. Josh Lopina picked up where he left off last season getting to the dirty area and collecting the loose puck and finding the back of the net with it. And before that, Eric Faith cut to the front of the net and received a pass from Scott Morrow to help bury a goal of his own. Though the offense only excelled for two periods, there is reason to believe that with improvements and added game experience for new players, the Minutemen can return to their late season form in the offensive zone.

It’s also important to remember that UMass didn’t start last season off on the right foot either. The Minutemen started 2-3-1 including two crushing losses to Boston College and another to a much less skilled Merrimack squad. UMass needed a few games to settle into their identity and the same can be true for this season.

These next two weeks to prepare for No. 20 American International College will be pivotal for the Minutemen to get back to their brand of hockey.

Colin McCarthy can be reached at [email protected] and  followed on Twitter @colinmccarth_DC.