Richmond shuts down UMass 1-0 on Sunday

Coming off a big win, UMass fails to repeat against Spiders 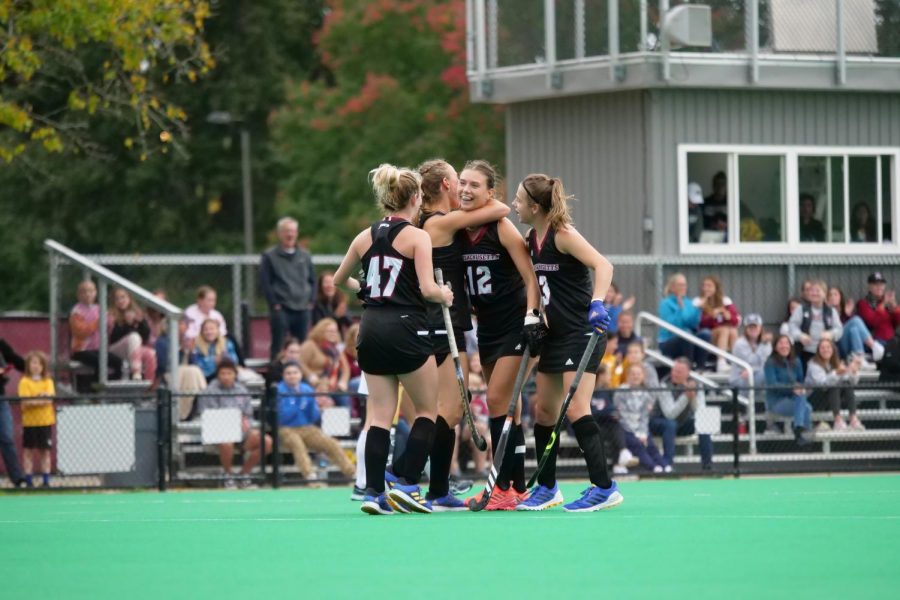 Coming off an overtime conference game thriller, the Massachusetts field hockey team had a total shift in energy on Sunday, falling 1-0 to Richmond. After four quarters, No. 21 UMass (10-5, 3-2 Atlantic 10) couldn’t match the Spiders’ (5-10, 4-2 A-10) intensity on either side of the ball and failed to bring life into its offense.

Just under two minutes into the second quarter, a backhand scoop shot from Richmond’s Addie Nash put the ball perfectly over Marlise van Tonder to get the Spiders going early. By the 13-minute mark, Richmond already had complete control over the pace of the game. The goal by Nash was a payoff of the Spiders’ growing momentum through the first half.

At halftime, UMass tried to change its formation by putting another player in the back field to work the ball out at a higher success rate. In the latter half of the match up, the Minutewomen did find some success in the new formation, but the late start plagued them as they were unable to get a point on the board.

The early goal from Richmond ultimately came at a crucial moment for the Spiders. By the end of the game UMass held an advantage in a few different areas of the field; but the Spiders converted when they needed to, whereas the Minutewomen failed to find the back of the net.

With an offensive rejuvenation coming after a near-goal from Friday’s hero Steph Gotwalls, more corner presented themselves in the final minutes of the game. As the clock winded, with the game on the line, Bella Ianni smashed home a shot attempt, but Erika Latta’s heroic save prevented the equalizer.

The Minutewomen ended the day with shot on goal advantage and 6-3 on penalty corners but goals were the only category the Spiders needed the advantage in.

For a majority of the first half, Richmond intercepted almost every transition pass the Minutewomen tried to make. A combination of UMass passing into a sea of red jerseys and getting beat to the punch when trying to move the ball up field, the Spiders had an energy and pep in their step that UMass lacked. Even with the success found after adjusting the formation, the Minutewomen still struggled to productively work the ball around, often time seeing it taken away before they had the chance to attempt a shot. UMass had a great look at a goal at the end of the first quarter, but a Richmond defender managed to disrupt the three Minutewomen forwards’ rhythm.

On Friday, UMass took down No. 11 Saint Joseph’s and proved that national ranks don’t always stand true. 48 hours later, unranked Richmond shook up UMass and from the first play to the last, was in complete attack mode. In previous games this season, the Minutewomen have bounced back from a 0-1 deficit quickly. On Sunday, similar to the loss against Virginia Commonwealth, the opportunities presented themselves on corner penalties, but it all came back to lack of execution to secure the goal.

UMass now sits fourth in the A-10 standings and Richmond moves up to third. With two of the last three games of the season being conference match ups, the Minutewomen have a lot on their plate nearing tournament play.

“Keep focusing on the process one day at a time,” Weinberg said. “We are not looking forward to any outcome. Our focus is now on recovery and coming back on Wednesday and having a good training session.”