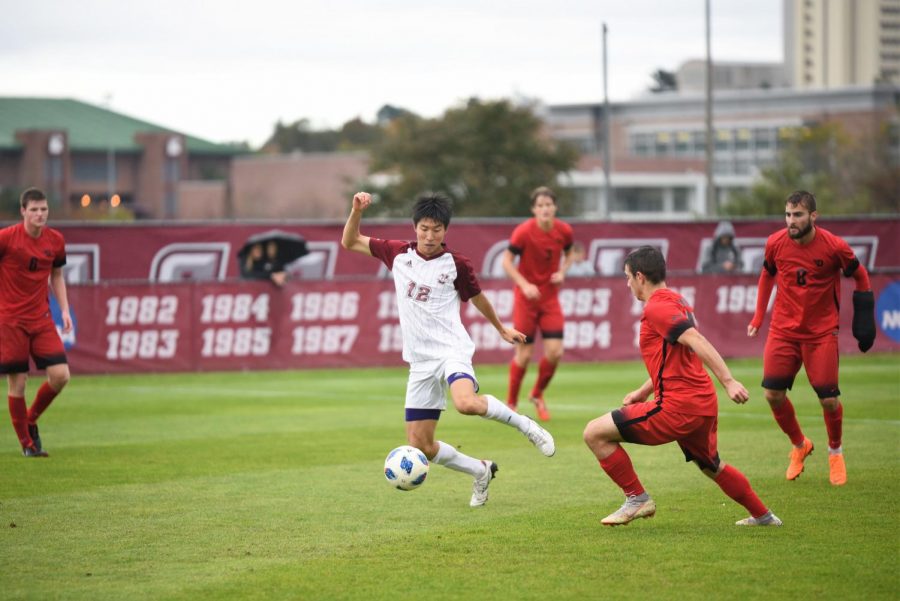 The Massachusetts men’s soccer team was unable to keep up with an impressive second half performance by Dayton, falling 4-2 in the finale of its road trip.

UMass (7-3-1, 1-2-0 Atlantic 10) upped its energy and applied pressure in the second half, but Dayton (4-5-2, 1-1-0 A-10) prevailed with lethal late counters. There was no shortage of momentum shifts throughout the game, but the Flyers pulled away late to come out with the victory.

The Minutemen struggled to get the ball rolling in the first half and couldn’t keep possession on Dayton’s side of the field. UMass coach Fran O’Leary attempted to change this course with three early substitutions, but it wasn’t enough to prevent constant offensive waves from Dayton, who exploited the open flanks all throughout the first half with dangerous crosses.

Dayton opened the scoring with ten minutes left in the first half after a beautiful one-time finish by Kingsford Adjei. Sensational ball movement by the whole team eventually filtered the ball deep in the Minutemen penalty box for Adjei to net his fourth goal of the season.

The second half was a fresh start for UMass as it established a rhythm and started winning balls in the attacking third. The high press that proved to be effective against Yale finally began to do some damage, and paid off when the Minutemen were awarded a penalty in the first ten minutes of the half. Filippo Begliardi Ghidini, the A-10 Player of the Week, was able to keep his composure and tie the game from the spot.

“I think it was just a change in mentality,” O’Leary said. “We were on the backfoot in the first half, and then we went on to the front foot. We talked about it in halftime; we embraced how difficult it would be in the second half. It’s hard against teams like this on the road, and in the first half we made them look even better than they are.”

In the 66th minute a patient counter attack concluded with UMass’ Ryan Kim beautifully placed cross within the six-yard box, and James McPherson took advantage of a defensive mistake to set up an Alec Hughes tap-in to take a 2-1 lead.

Shortly after when UMass took the lead, a sequence of poor clearances by the defense saw the Flyers capitalize on them. Andy Sanchez finished a close-range opportunity, tying the game at two apiece. The Flyers were not done, and in the last five minutes of the game shattered UMass’ hopes of a comeback with two more late goals. First, Dayton’s Elias Harryson scored on a header off a set piece in the 85th minute then Geni Kanyane settled it with a top corner finish from outside the box in the 89th minute.

“The key takeaway for us is that we’ve played two Ivy league games where we’ve given up goals later in the game, so we’ve gotta get better when we have the lead,” O’Leary said. “We’ve given away six points in the conference by not holding on to the lead so that’s going to be a point of emphasis moving forward.”

“We’ll just get back on the training ground and work to get better, that’s what we do all the time.”

UMass will continue conference play next Saturday at home against George Washington. Kickoff is set for 1 p.m.