The Minutewomen failed to convert on 18 shot attempts 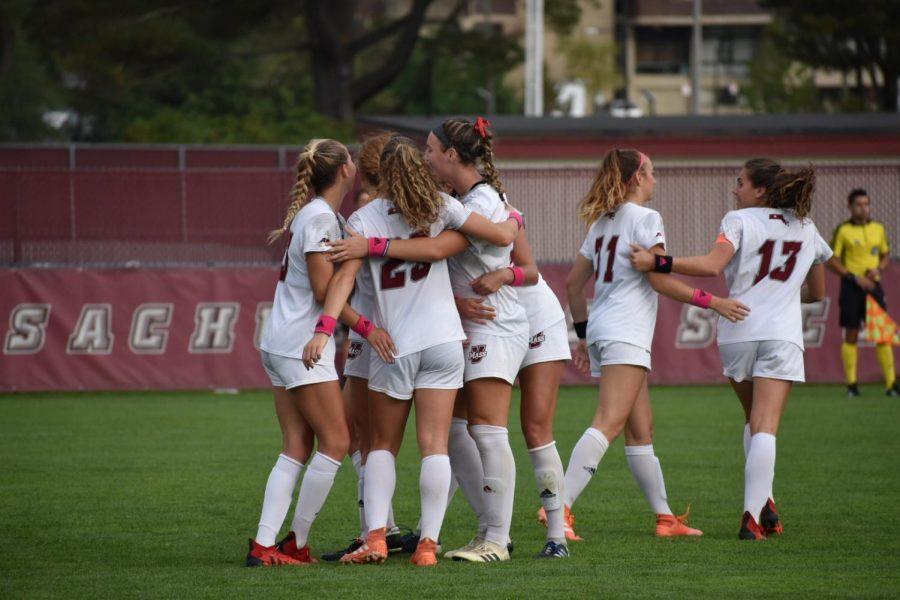 Draped in pink, fans and athletes came together for a moment of silence before kickoff to commemorate those who have been affected by breast cancer. Players on the Massachusetts women’s soccer team wore pink armbands, hair ties and other accessories throughout the game to show its continued support, including that of its head coach Jason Dowiak.

“It touches my heart very closely,” Dowiak said. “My mom passed away a little over five years ago from breast cancer so it’s always an emotional day in my head at least. We try to do our part to keep the awareness high.”

The Minutewomen (9-4-4, 5-2-2 Atlantic 10) kicked off against St. Bonaventure, a familiar A-10 opponent that forced the energy out of UMass from the start. The Bonnies (6-7-4, 4-4-1 A-10) put their foot on the gas early, opening the game with a great look at goal only 17 minutes in. St. Bonaventure forward Cristina Torres weaved her way through the box, getting her head on the other end of an out swinging cross, hitting it up and over goalkeeper Megan Olszewski. The applause was quickly silenced by the line ref on the far side of the pitch, who had his flag raised for an offsides call.

The Bonnies ended up converting once more later in the game, or as they thought, only to see the flag come up one more time leaving the game scoreless despite two great scoring opportunities. The Minutewomen’s prolific back line were able to read St. Bonaventure’s attacking runs and time there off-sides traps to perfection to keep the Bonnies off the scoreboard.

“The second [offsides goal] was [because of UMass’ defense] for sure,” Dowiak said. “Sam [Mitchell] focuses a lot with our defensive organization on set pieces and we worked on it a lot so it’s good that they did their job well on that one. We got lucky on the first one.”

“Our back three do such a good job at understanding the positional needs in those moments,” Dowiak said.

The Minutewomen showed a lack of energy in the first half, an uncharacteristic trait in comparison to their recent games which have shown early goals and opportunities. Despite the 18 total shots UMass was able to attempt, only three fell on target. Sluggish legs provided St. Bonaventure goalkeeper Chiara Gottinger with a relatively easy day in net.

Gottinger’s biggest test came during the first overtime period. Bella Recinos got the ball in the center of the box and glided a right footed shot across the grass, forcing Gottinger to get low to the ground and push the ball away. The ball ultimately ricocheted off the post and was cleared away by Bonnies’ defenders.

“It was less about us changing things and more just us trying to get them motivated at halftime to get them back to better versions of themselves,” Dowiak said. “We didn’t play well in the first half at all. Quite sloppy, kind of lethargic today. I’m proud of how they figured the game out as it went on.”

Along the front line, Karina Groff provided essential touches in the buildup play of the Minutewomen’s attacking chances. Shoulder-to-shoulder tackles and constant running throughout the course of the game, Groff, grass stains and all, showed the physical toll games like this have on the players.

“I was very tired,” Groff said. “I kind of wanted to finish the game and get it done. I feel like everyone wanted that. We gave it all we had.”

UMass had a chance to put the game away with only five minutes left in regular time when Chandler Pedolzky cracked a half volley off the crossbar which echoed a ringing around Rudd Field.

The Minutewomen never decided to switch up their game plan despite their lack of clinical finishing on the day. UMass’ unsuccessfulness to settle into the game until its latter periods cost it critical time to create more optimal chances.

“Not much changed coming out of the second half and going into overtime,” Groff said. “We just carried [our game plan] through and unfortunately we didn’t see it all the way through.”

UMass will close out the regular season Sunday Oct. 24 against La Salle. Kickoff is set for 1 p.m.