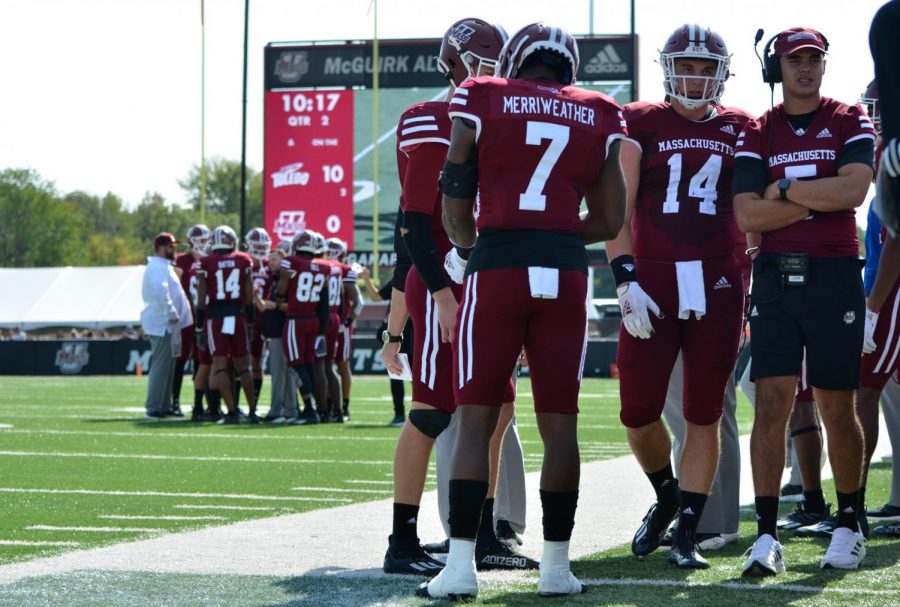 The Massachusetts football team is seeking its first win in over two calendar years this Saturday against a similarly struggling Connecticut team at home.

UMass (0-5) has been outscored 98-10 over its last two games and owns one of the worst scoring margins in the country. Out of 130 teams on both offense and defense, the Minutemen rank No.110 or worse on points per game, yards per game/play and third-down conversions. Not only are they unable to score points or gain yardage, but they also haven’t stopped anybody else.

UConn (0-6) also rank in the statistical basement of college football but have at least had multiple competitive outings this season. On Oct.2, the Huskies lost on a last-second field goal to Vanderbilt. The week prior, the game against Wyoming was decided by a failed two-point conversion.

Bell said he has noticed plenty of improvements out of UConn over the course of this season. The Huskies were shut out 45-0 by Fresno State in week one and 49-0 by Purdue in week three but have since scored at least 21 points in each of their last three matchups.

“They’re running the football better, they’re playing with more pace on offense, their special teams play is much better and they seem to be executing better on defense as well,” Bell said.

The Minutemen’s struggling offense suffered another blow last week against Toledo. Rutgers transfer Kay’Ron Adams will need ankle surgery after being carried off the field in the loss to Toledo. Bell expects redshirt junior Ellis Merriweather to do the heavy lifting out of the backfield, with freshman walk-on Carter Scudo a “toenail injury away from being the guy.” Merriweather enters Saturday’s game as the team’s leading rusher, averaging over 5 yards per carry this season.

“I don’t really go out there and think about protecting myself,” Merriweather said. “I go out there and think about laying it all on the line so as far as keeping myself healthy, I’m not really thinking about that. “It’s unfortunate about Kay’Ron, that’s my brother. We’ll miss him in the running back room cause he’s a great leader, he’s a great player but sometimes you do have to have that next man up mentality.”

Both Merriweather and Bell admitted that this rivalry game between two winless schools isn’t just another date on the calendar.

Neither team is at full strength, due to the litany of injuries for UMass and recent news that multiple players and coaches for UConn are out after testing positive for COVID-19.

“It’s UConn vs UMass, that’s probably the rivalry of New England,” Merriweather said. “Definitely a little extra juice, but I think people are also just excited to go out there and have an opportunity to play football. It’s a blessing to be out here. Kay’Ron’s killing to be out here with us today so, be grateful.”

If Bell’s plan is to keep swinging the hammer at the stone, this week provides the best chance all season to finally break it. Kickoff is set for 3:30 p.m. at McGuirk Alumni Stadium, and is available to watch on NESN or listen on WEEI 105.5 FM.