The Minutewomen are in fourth place in A-10 standings 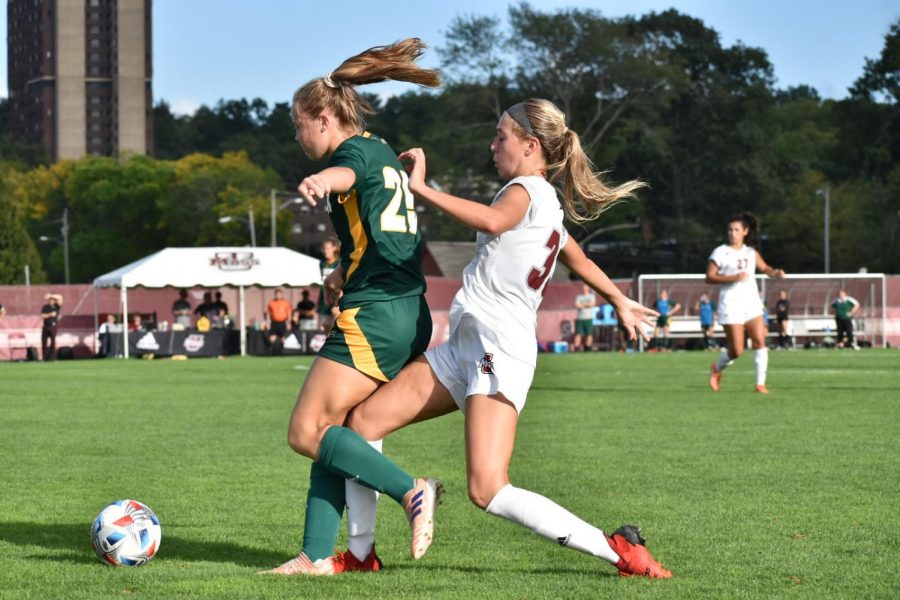 Offense has been a priority this week at practice and the Minutewomen are looking to create opportunities early and get shots on net.

“Our focus is to show our full potential in our offensive phase and really put some clear worry in everybody else’s eyes on what we look like now going into the end of the season,” head coach Jason Dowiak said. “The mentality for us right now is we must win Thursday. If we win Thursday, it puts a lot of pressure on everybody else but relieves pretty much all the pressure from us.”

There are only two games remaining in UMass’ season: Thursday’s game against St. Bonaventure and Sunday’s matchup at La Salle. If the Minutewomen can secure positive results in those matchups, they are on track to advance to their fourth consecutive A-10 tournament.

The last game against Fordham saw two second half goals scored, one by Karina Groff, who got her fourth goal of the season, and Olivia Gouldsbury, who recorded her first this season. Chandler Pedolzky got both assists.

“We worked on something pretty specific in our attacking phase [Tuesday], and we’ll do a little bit more with it [Wednesday],” Dowiak said. “We’re knocking on the door of being an explosive offensive unit.”

The goal for Thursday’s game is for UMass to generate movement early in the game and show strength and dominance. With a win, the Minutewomen will look to rest many of their players during Sunday’s game to prepare for post-season.

The defensive line has been strong and consistent with Fiona Kane, Juliana Ryan, and captain Ava Jouvenel leading.

“The back three, they have played some very good soccer,” Dowiak said. “The reason we’re not giving up a lot of chances is because they are so good on the ball, and they have been so good on possessions. The progress we have seen from them, getting settled in, getting more patient, encouraging the tempo of our speed of play, really stems from them.”

Bella Mendoza began the season starting in net but was sidelined with an injury and Megan Olszewski took over. Since her return, Mendoza and Olszewski have been splitting time in goal and have both come up with many big saves.

On the offensive side, Pedolzky leads the team in points with 16, followed by Ashley Lamond and Groff. Pedolzky has become a force in the middle of the field, sending through balls behind the opposing teams back lines and finding teammates. With a predominantly younger team, there is still room for growth, but the Minutewomen have shown strength in all areas of the field.

“For us it’s hard to say that one area is developed or progressed faster or better than any of the others because we wanted something very specific from each of the different positional groups,” Dowiak said. “They’ve not only given it to us, but they’ve excelled in those areas.”

UMass will take the field at 3 p.m. on Thursday.