Fourth overtime game for the Minutemen this season 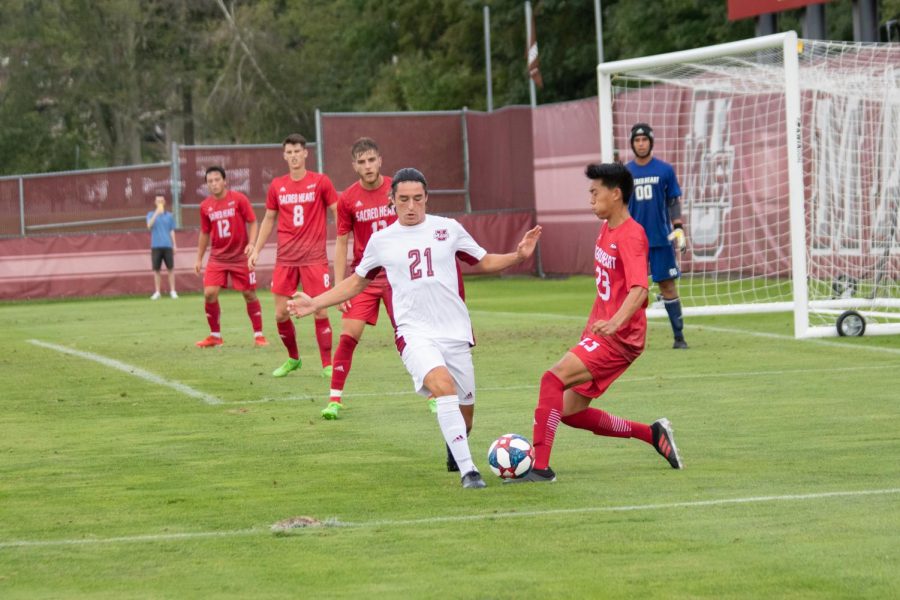 The Massachusetts men’s soccer team was held to an overtime draw at home by George Washington. In an extremely physical outing, both teams struggled to finish plays and the scoreboard showed 0-0 at the end of overtime.

UMass (7-3-2, 1-2-1 Atlantic 10) applied early pressure, earning two corner kicks in the first five minutes. However, George Washington (3-8-2, 1-3-1 A-10) answered immediately with four corners of its own, but neither team was able to capitalize on them. At the end of the game, the total number of corner kicks rose to 15.

In a somewhat uneventful first half, two very dangerous headers and a direct free kick for an easy save were all the Colonials had going, but that was still more offense than UMass was able to generate. The Minutemen struggled to get the ball into the box, and had no shots on target all throughout the first 45 minutes.

UMass had problems with first touches and were losing the ball easily in its opponent’s territory, and the Colonial defense dealt perfectly with the few infiltrations the Minutemen managed to get going after insisting with long balls to forwards Filippo Begliardi Ghidini and Mike Willis the entire first half. On the other end, the UMass defense was stout and denied anything the Colonials tried to create as well.

“We were lacking a little bit of quality today which we’ve had, but I was pleased with the performance of the team in terms of our toughness and our competitiveness today. I thought it was a big step forward on the Dayton game,” O’Leary said.

The Minutemen started the second half strong when, within two minutes of the start, they already had a direct free kick from just outside the box. It ended in a goal kick for George Washington but was still important for UMass in terms of setting the tone early in the frame.

The clearest chance of the game happened in the 64th minute, when Begliardi Ghidini recovered the ball deep in Colonials territory but had his shot stopped by its goalkeeper Justin Grady in a one-on-one encounter. The resulting corner kick was just as dangerous, as the ball was clogged by Grady right at the goal line.

In the 76th minute, a very long shot by UMass’ Ryan Levay was deflected and almost rolled in after catching Grady on his back foot, but an improbable recovery by the goalie sent the ball to the corner spot once more. Time went by and neither team found a way to put the ball into the net; they were headed to overtime at Rudd Field.

The first overtime frame perfectly mirrored the first half of the game; it was uneventful and, while both sides managed to reach the attacking third, no real chances threatened the goalkeepers. The Colonials continued to aggressively press the Minutemen offense.

Within 30 seconds, George Washington took advantage of a defensive mistake and immediately got a shot off, warning the Minutemen defense for its lack of poise. The first three minutes of the second overtime period were full of errors for UMass, but it quickly turned it around and made one last push with two very dangerous counter attacks. At the end it wasn’t enough to score a goal before the final horn sounded.

Striker Begliardi Ghidini also expected the physicality of the matchup given that both teams are fighting for a spot in the playoffs.

“It didn’t go our way, but I think it was a good game,” Begliardi Ghidini said. “I think the team performed well; we fought until the last second.”

UMass will continue conference play next Saturday on the road against Davidson. Kickoff is set for 1 p.m.