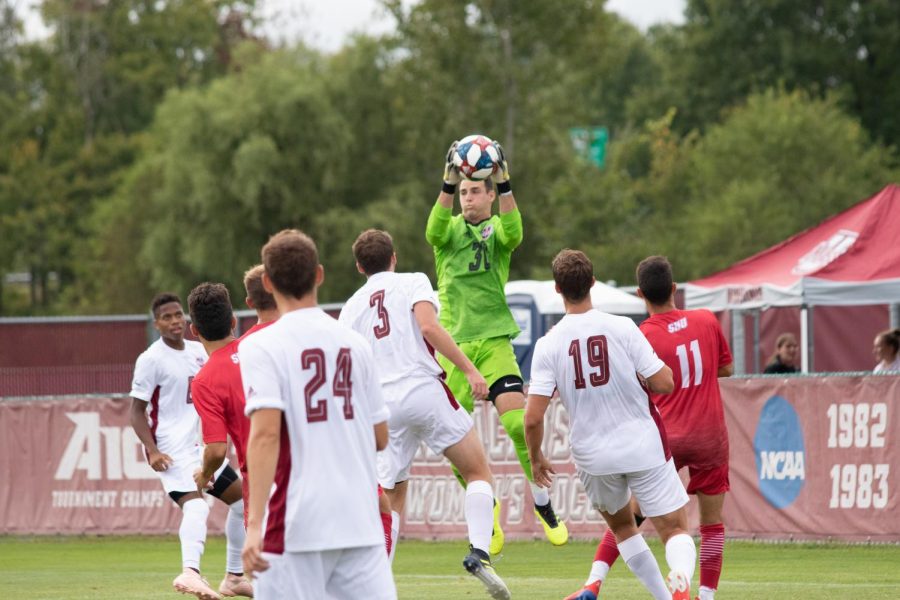 By Will Kharfen, Collegian Staff

After seeing its three-game winning streak snapped by Dayton in its last outing, the Massachusetts men’s soccer team is looking to get back in the win column when it hosts George Washington on Saturday.

UMass (7-3-1, 1-2-0 Atlantic 10) has had a successful season thus far, and now the team is ready to shake off its loss as it heads into the final stretch. The Colonials (3-8-1, 1-3-0 A-10) on the other hand have struggled to find any success this season. They are currently on a three-game losing streak and are 1-7 in their last eight games.

UMass understands the importance of conference games as the season progresses. Its goal is to work towards a spot in the A-10 playoffs. The Minutemen missed out on the A-10 tournament last season but bring success and experience in the NCAA tournament that will be key in the final stages of this year’s regular season.

“I mean we certainly have to get a win this Saturday,” Filippo Begliardi Ghidini said ahead of Saturday’s contest. “We know how important this game is, especially if we want to make the playoffs. I know we’re doing good, but we’re not in a good spot for the playoffs right now, as we see other team’s winning. We know how important it is and we’re motivated, so it’s like a final for us.”

After giving up the lead to Dayton late in last Saturday’s game, UMass was able to recognize a lot of mistakes it made and correct them.

“It was a tough loss against Dayton,” Begliardi Ghidini said. “We thought we were ready, but there were some mistakes that we are fixing so we can be ready for Saturday.”

UMass placed a heightened focus on the defensive side of the ball heading into its weekend matchup against George Washington. Keeping the Colonials off the scoreboard takes the pressure off of the Minutemen offense.

“We need to try and get a clean sheet because that’s a recipe for success and helps us win games,” Begliardi Ghidini said. “It doesn’t matter how many goals we are able to put away but if we get a clean sheet, that’s a good starting point.”

The coaching staff for UMass has also done an excellent job managing the team this season. Being able to score timely goals and play aggressively is something that the Minutemen have done well as a result of the strong messages from head coach Fran O’Leary and the rest of his coaching staff.

“We know that we have to stay positive,” Begliardi Ghidini said. “It’s important not to get frustrated in this part of the season especially. Of course the coaches know how important this is and how much we all want it. They’re doing a tremendous job motivating us.”

Begliardi Ghidini is off to a strong season so far, scoring seven goals and collecting two assists, along with compiling a team leading 16 points. The graduate student credits much of his success to his teammates’ strong play.

“The team has done a good job to put me in a position to score goals this season,” Begliardi Ghidini said. “I’ve been working on my finishing. It’s more like a mental state, so I hope to continue that and try to help the team as much as I can with goals.”