Minutemen currently in 10th place in A-10 standings 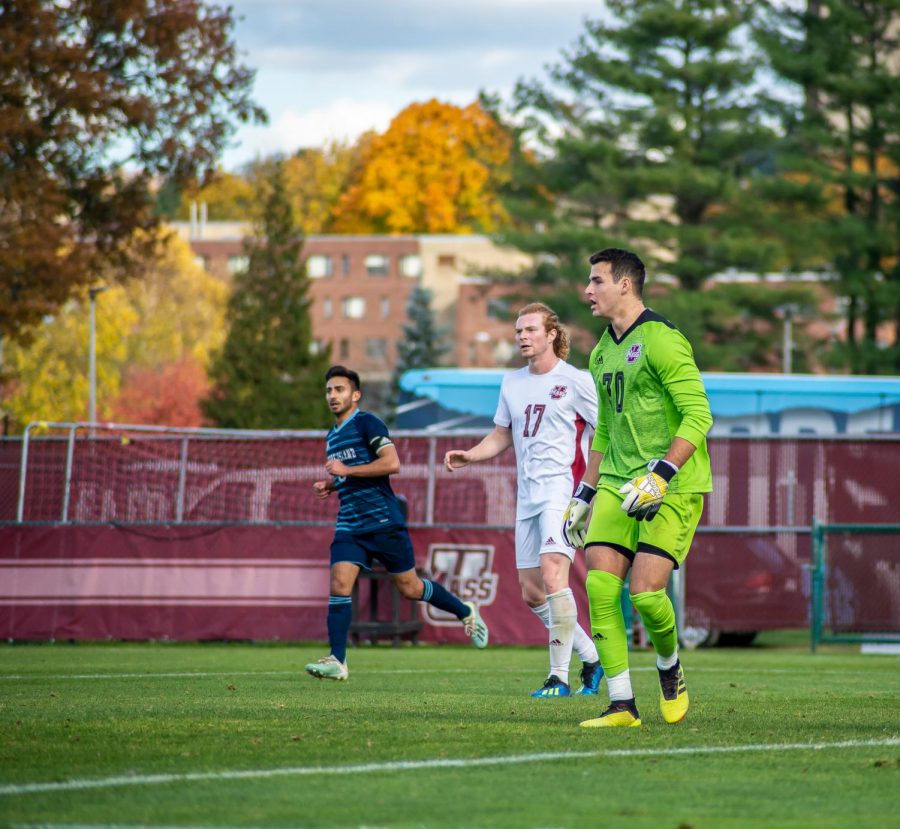 After a draw to George Washington in a 0-0 battle that went to overtime and a 4-2 loss on the road to Dayton, the Massachusetts men’s soccer is looking to bounce back when it takes on conference rival Davidson on Saturday.

The Wildcats (7-5-1, 2-2-1 Atlantic 10) are coming off a big 4-0 loss to No. 5 ranked Virginia Tech on the road. UMass and Davidson have struggled as of late to find its footing in conference play, which is why this upcoming contest is so critical for the squads.

UMass (7-3-2, 1-2-1 A-10) hasn’t faced Davidson since Oct. 9, 2019 when it lost 1-0 on the road. The Wildcats have faced four ranked opponents this year and are certainly battle tested in terms of finishing out this season strong. A three-game winning streak from Sep. 21-28 saw the Minutemen riding out on a lot of momentum, something that needs to happen down this stretch of these final conference games.

The Minutemen’s offense has been led by the play of forward Filippo Begliardi Ghidini. In 12 games this season, Begliardi Ghidini has started in all of them scoring seven goals along with two assists. His production on the pitch has turned into success for UMass.

“We know it’s going to be a really tough game” Begliardi Ghidini said.“We’re out of the playoffs [at the moment] so we’re getting ready to go to North Carolina and try to get three points.”

The Minutemen have been in a bit of a funk as of late, which is why finding their rhythm will be key towards these final weeks. The end of the season is nearing, and this is when the rush for points begins. Securing a win against Davidson and the three points that come with it would be huge for qualifying into the A-10 Tournament.

UMass goalkeeper Marvyn Dorchin understands the importance of finishing out strong to end the season. He has been the backbone of the defense for the Minutemen this year.

“Our set pieces are going to help us get these three points [against Davidson], Dorchin said. “We have to bring the joy back with the guys after one-point last weekend [against George Washington] and making practice fun while preparing mentally and physically.”

Dorchin’s presence in net is going to be one of the keys to victory for UMass. Having three clean sheet games this year, Dorchin is the leader of that back line and one of the most vocal players on the team. With a save percentage of .725 percent, Dorchin has shown his consistency and reliability in goal for the Minutemen.

The energy at UMass’ practice on Wednesday in preparation for Davidson on the weekend seemed to be filled with excitement and joy.

“I mean definitely [the energy is high]” Dorchin said. “I feel like the energy has been going up.  [I am] actually getting excited because this is a pivotal point of the season, so we definitely are prepared and excited to make this work out for us.”

The Minutemen are currently in in tenth place in the A-10 standings. A win on Saturday would keep UMass afloat in hopes of qualifying for the A-10 Tournament. As a tough slate of conference games await them to end the season, all eyes are geared towards Saturday’s matchup against the Wildcats.

UMass’ road matchup with Davidson is set to kickoff at 1 p.m. on Saturday. It can be streamed on ESPN plus.