UMass plays to a 0-0 draw against URI 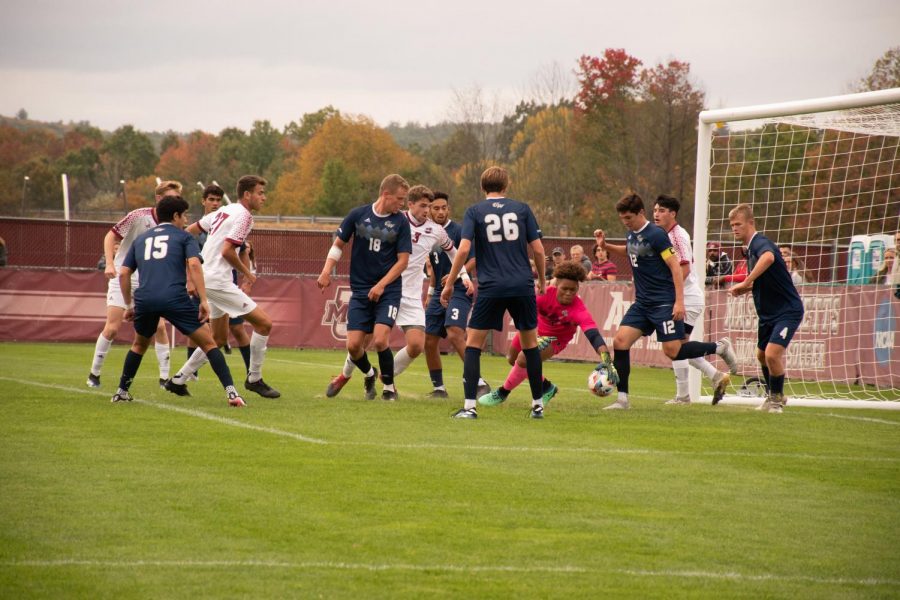 The Massachusetts men’s soccer team fought to earn a draw in overtime against two-time reigning Atlantic 10 champions, the URI Rams.

UMass was led by graduate goalkeeper Marvyn Dorchin. Dorchin had five saves and finished the game with a shutout. Dorchin faced a penalty kick with 21 minutes left in the second half, though the kick ended up going way over the net.

“Unfortunately, that one I didn’t have the chance to study who kicks their penalty kicks for URI,” Dorchin said. “In that case I was on my own. I just tried to distract him as much as possible, hold my ground and just trust my gut. He seemed nervous so I just tried making noise and moving around and it worked out for me.”

While the Minutemen had a hard time putting the ball in the back of the net, they did a lot that pleased head coach Fran O’Leary.

“I think we did a lot really well against a really good team” O’Leary said. “We outshot them 19 to 10, I think that they[‘ve] got a lot of really good offensive players, and I thought our goalkeeper [and] our back four stood up to some very talented attackers today.”

With the clock running down to end the second half, graduate forward Filippo Begliardi Ghidini almost nailed a goal from 30 yards out. The ball curved into the top right of the goal, yet the URI goalie made a save that brought the game into overtime.

“I think anytime you go into overtime it’s sudden victory,” O’Leary said. “You want to buy yourself the 20 minutes to try and score a goal because we always fancy ourselves to score a goal. The thing was to keep a discipline, not to dive in and make any silly mistakes and then chances would come.”

The last time UMass scored zero goals, the team bounced back against Davidson College and put in three goals.

“I think we will be looking to increase our offensive output against Duquesne,” O’Leary said.

The Minutemen had a total of six shots on net. They dominated the playing field, having six corner kicks to the Rams three. UMass seemed to play most of the game on URI’s side of the field, yet could not make a shot.

“We just couldn’t score, I think we were better than them towards the end, but if you don’t score then it doesn’t really matter,” Begliardi Ghidini said. “We hope to do better our next game.”

The three points this game would have been huge for the Minutemen as playoffs are tight right now. Going into this game, UMass was ranked sixth in the A-10 while URI stood at second. Still earning one point for the draw, the Minutemen look to return with six points on their upcoming two-game road trip.

UMass will be taking on conference opponent Duquesne in Pittsburgh on Saturday, Oct. 23. The game will be broadcast at 7 p.m. on ESPN +.

Samuel Rodriguez Jr. can be reached at [email protected]