UMass prepares to take on St. Bonaventure in A-10 quarterfinals on Sunday

Energy was high in practice on Friday 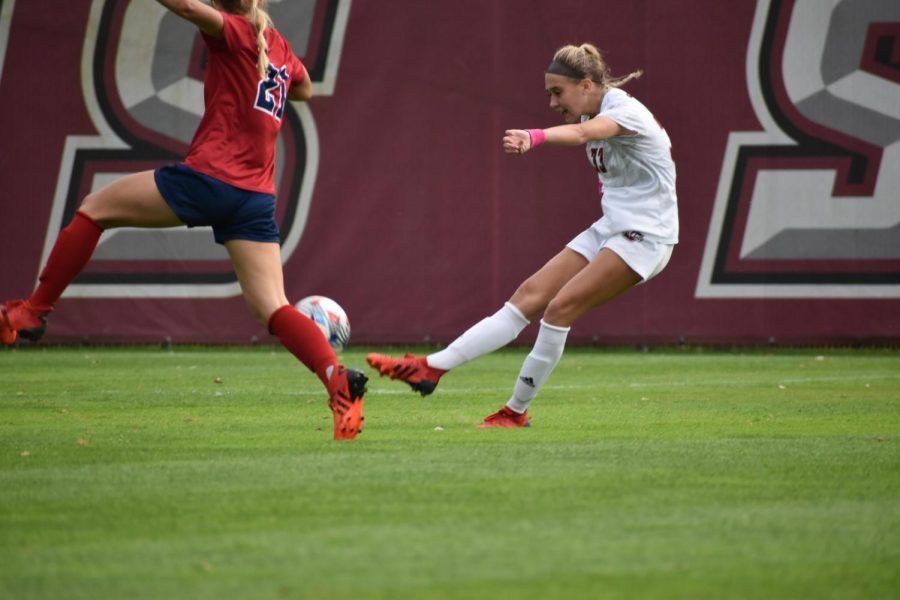 Smiles adorned the faces and laughter ringed throughout the field as the Massachusetts women’s soccer team practiced on Friday morning in preparation for postseason play. Energy was high, with the players giving each drill their all.

“It’s just about preparing for moments,” UMass coach Jason Dowiak said. “I think we’re going to see our best game yet. I think the group is in a good place mentally. I think this week has helped us get into a really good place physically and we’re just looking for the quality.”

The Minutewomen (9-5-4, 5-3-2 Atlantic 10) have focused on recovery this week following the end of regular season play. Getting their injured players healthy and ready to play to their fullest on Sunday was a point of emphasis. Karina Groff, who has been a leader on offense this season, did not see time in the last regular season game against La Salle, but Dowiak is hopeful for her return on Sunday.

Friday’s practice also saw many athletic diving saves from Megan Olszewski and Bella Mendoza. Both goalkeepers have spent the season splitting time after Mendoza was sidelined with an injury in early September. With post-season play beginning, the question remained of who would get the nod in net.

“[Megan Olszewski] will start,” Dowiak said. “For us, it’s just about being blessed to have two goalkeepers that we really trust and that we can put in at any moment in the game, and they are both going to be ready at all times. They are both mentally switched on and they also lift each other up and support each other.”

In front of her, Fiona Kane, Juliana Ryan and captain Ava Jouvenel have held down the back line preventing many opportunities and clearing the ball away from the net. In the matchup against St. Bonaventure during regular season, UMass was able to contain them, but were unable to find the back of the net themselves. The game ended as a 0-0 draw after double overtime.

“I thought we were excellent defensively,” Dowiak said. “We went into that game maybe overlooking the opponent and they are a good team and we’re young. Our group is still learning how to compete when it matters the most, so I don’t think that we’ll see that start performance that we saw last week, and then it’s just about us finishing out opportunities early on to take full control of the game.”

Saint Bonaventure’s (7-7-4, 5-4-1 A-10) Cristina Torres is the leading goal scorer in the conference with 13 goals this season. Most offensive opportunities for the Bonnie’s will look to go through Torres so it will be the responsibility of the defense to contain her and prevent her from getting the ball as much as possible.

For the Minutewomen, Chandler Pedolzky has the most assists in the A-10 with eight. Pedolzky is a leader on offense creating opportunities and taking many shots throughout the game, recording 52 throughout the season, with four finding the back of the net.

“We don’t score a lot during first halves of games,” Dowiak said. “It’s part of our style of play. We try to wear teams out with our possession and make them chase and the later into the game is why we see a lot more chances for ourselves and better chances develop.”

Throughout the season, UMass has scored seven goals in the first half, compared to 15 in the second. The later part of the game often sees a surge from the Minutewomen.

UMass will face off against St. Bonaventure in the quarterfinals of the A-10 tournament on Sunday at 1 p.m. on Rudd Field. The game will be streamed on ESPN+.