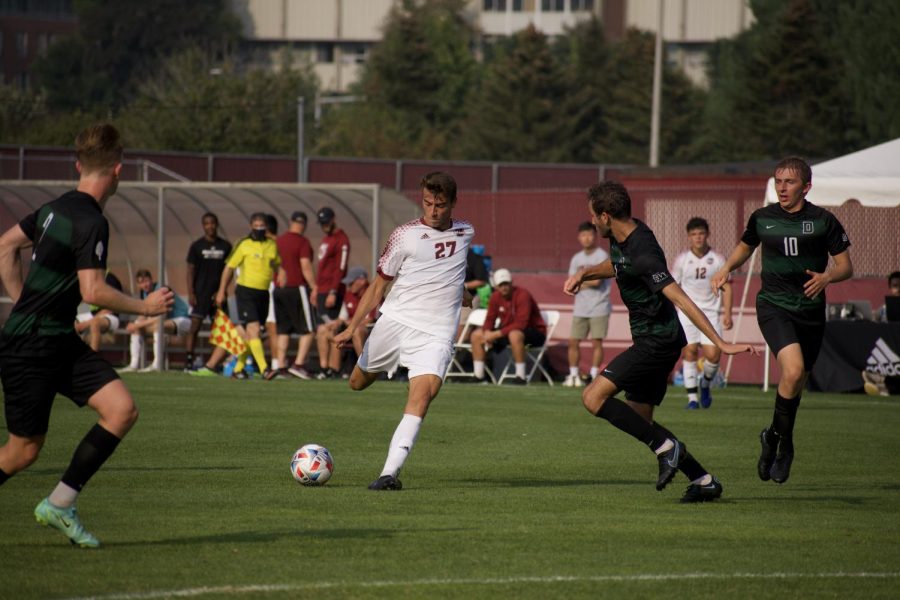 After a span of games during the middle of September in which the Massachusetts men’s soccer team lost two out of three games, things have turned around thanks to a successful spell on the road.

UMass (7-2-1, 1-1-0 Atlantic 10) is clicking into gear at the right time. After winning three straight games away from Rudd Field, the Minutemen will finish out their road trip with a matchup against Dayton (3-5-2, 0-1-0 A-10). The Flyers have struggled to find their groove this season but have battled through a tough nonconference schedule to begin the year. Dayton lost 3-0 on the road to No. 4 West Virginia and 3-1 at home to No. 10 Kentucky.

“The message [to the team] is to keep doing what we’ve been doing,” UMass midfielder Ben Shepherd said ahead of Saturday’s contest. “Just maintain the focus. I think when our mentality is right we can go press teams, high-press teams, and they can’t do it with us. I think [we just have to] keep the focus and the mentality. We’ve been great on away trips, so we just hope we can keep that up.”

The Minutemen are riding high at the moment by virtue of some clutch play on the road. All three wins have been decided by one goal, only conceding two goals through that span.

Stout defending and aggressive play in the front attack has been key to the winning streak. UMass’ last contest was on the road at Yale in which they narrowly pulled out the win thanks to a last-minute goal by Filippo Begliardi Ghidini to put them ahead 1-0. The squad is gelling together at the right time as conference play heats up.

“Confidence is really high [right now],” Shepherd said. “I mean it was a good Yale team we played, and we thought we had the better of the possession and better of the chances. Obviously very high confidence right now.”

Shepherd has been a key part to the Minutemen’s success this year. A red shirt senior, Shepherd has been critical in the midfield in the link up play between him and the front three of Begliardi Ghidini, Yosuke Hanya and Alec Hughes. During the three-game winning streak Shepherd has combined for six shots on goal for the Minutemen, a key boost to the offensive attack after he didn’t record a shot in both loses against Vermont and Saint Louis.

“I feel like I’ve been playing better,” Shepherd said. “Middle of the season I was dealing with some stuff, but I’ve come back, and I think I’ve played a little better.”

Another key contributing factor for UMass has been its ability to convert on set pieces. Head coach Fran O’Leary emphasized throughout the year how critical they are to his team’s success. The Minutemen are proving that they can create some offensive opportunities through those plays on the pitch and have looked dangerous in the attack when they execute well.

“Obviously against UMass Lowell set pieces were massive and in general they are massive for college soccer,” Shepherd said. “It has been a big emphasis and I am just glad I can contribute in that way.”

Against UMass Lowell, the Minutemen converted their two goals through set pieces that were beautifully executed. Shepherd assisted Andrew Ortiz in the opening goal against the River Hawks thanks to a through ball he sent into the box. Shepherd’s ability to send in quality balls into the box off of free kicks has been impactful for UMass.

The Minutemen have already matched their win total from their previous two seasons in 2019 and in the shortened 2021 spring season. Maintaining focus will be big in terms of relaying this success into qualifying for the A-10 Tournament.

“Last year not getting into the A-10 Tournament angered us,” Shepherd said. “I think we have a little chip on our shoulder. A lot of teams don’t see us still as that powerhouse in the conference. We still have that chip and we are still that underdog, so that’s a good thing.”

UMass finishes out its road trip when it takes on Dayton Saturday. Kickoff is set for 7 p.m.