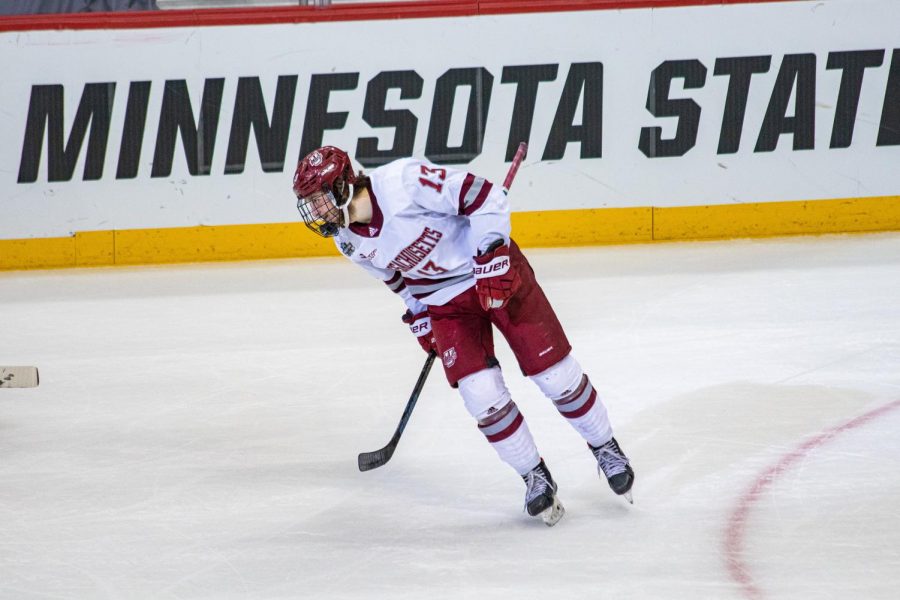 SPRINGFIELD — The Massachusetts hockey team put its opening weekend struggles behind it and picked up a statement victory over American International College on Friday night.

Scoring came early and often for No. 9 UMass (1-2.) After heading to the power play early, Reed Lebster found his first goal of the season less than a minute into the first period. That opened the flood gates to an onslaught of offense, and by the midway point of the frame the Minutemen were already holding a comfortable 4-0 lead.

“I think the first goal is always one of the biggest factors in the game,” Matt Murray said. “It’s a big swing of momentum and for us to get it tonight was big.”

The depth that UMass lacked in its opening weekend took a step forward against the Yellowjackets (0-2).  Eight different skaters found the scoresheet, and three of the newest Minutemen — Ryan Ufko, Scott Morrow and Matt Baker — each earned an assist for the first points of their UMass hockey careers.

Head coach Greg Carvel was critical of the performances of his newer players through two games, but Friday showed a glimpse of their talent. If the freshmen and transfers continue to find their groove, they will provide another dimension to the Minutemen offense. More importantly for their growth, UMass’ veteran players stepped up to the plate, with Josh Lopina and Bobby Trivigno earning one goal and one assist each.

“We took some steps forward,” Carvel said. “There’s still a lot of mistakes that we’ll address, but after Minnesota State we had a lot of guys that we were trying to teach to play the way we play. But I’m happiest about our returning players … the returners need to lead before I worry about the rest of the guys following.”

AIC came out of its locker room for the second period with a sense of urgency already down four goals. It built plenty of offensive momentum and was knocking on the door of a much-needed first goal. But Murray stood tall in net and fought off the Yellowjacket’s attack, before senior defenseman Ty Farmer put a halt to their momentum with a deflating fifth goal.

A few minutes after Farmer’s goal, Lebster received a five-minute major penalty and a game misconduct for charging AIC goaltender Jake Kucharski. After two minutes of 4-on-4 action the Yellowjackets got a three-minute powerplay, but once again came up empty thanks to key saves from Murray. The Minutemen’s ability to not only keep AIC off the scoreboard in the second period through multiple dangerous scoring chances, but to also add an extra security goal in the frame closed the book on a potential comeback.

“[Opening] weekend we had a lead like that and let it go so we’re learning how to win games when we’re on top,” Lopina said. “Don’t change our game plan, just keep the throttle down.”

By the time the Yellowjackets finally found the scoreboard there were less than 14 minutes to play in the game. Rather than allowing momentum to shift back to AIC, UMass responded to the goal with a lengthy possession of its own. Even though it didn’t come away with a goal, those minutes of offense prevented the Yellowjackets from building on their lamp lighter and inching any closer on the scoreboard.

Even with the decisive victory, there is still plenty of room for the Minutemen to grow. AIC outshot UMass 47-35 and won the faceoff battle 36-24. The Minutemen overcame those aspects and played confidently on Friday but will have to reset and prepare for a tougher challenge on Saturday. The Yellowjackets took their frustration out through big hits in the third period and will be just as physical for all 60 minutes in the rematch.

Part two of UMass and AIC takes place tomorrow, with faceoff set for 7 p.m. in the Mullins Center.