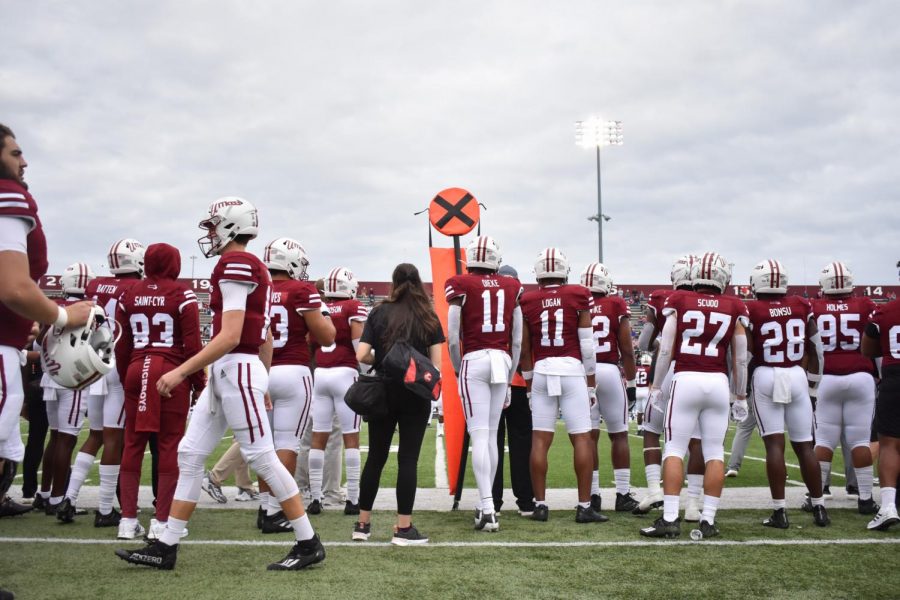 The Massachusetts football team has been ranked as one of the worst defensive teams in the country all season, but its rush defense was especially lackluster in Saturday’s 59-3 loss against Florida State in Tallahassee.

The Seminoles (3-4, 2-2 Atlantic Coast Conference) ran for 365 yards and five touchdowns, splitting 45 attempts between seven separate ball carriers. Florida native Jashaun Corbin eclipsed 100 yards for the third time this season, including a 29-yard touchdown rush that put FSU over 30 points in the first half. The Seminole’s tallied 262 first half rushing yards and four touchdowns.

Head coach Mike Norvell navigated a multitude of injuries to his linemen throughout the year but was impressed by their resilience and impact on Saturday.

“It’s been a challenging season for those guys, but I really appreciate their work and the sacrifices that they’re making,” Norvell said. “Guys are having to play multiple positions … these guys are giving everything that they have and to see them be able to go out there especially in the second half when we were really mixing up to personnel, to be able to still run the football and have some explosive plays, that’s big.”

FSU quarterback Jordan Travis has built a reputation as a dynamic, dual-threat quarterback since transferring to the Seminoles in 2019. Travis rushed nine times for 78 yards and a touchdown. Avien Peah, one of the few graduate students on UMass’ defense, knew the challenge that Travis would present as he prepared for FSU during the bye week.

“I think he’s very dynamic, he’s a very good player,” Peah said earlier in the week. “He can make plays from anywhere on the field so that’s definitely going to be a test for us.”

During FSU’s current three-game winning streak, it has averaged 283 yards on the ground in large part to the contribution of Travis.

Of the Minutemen’s 47 active defensive players, 37 are true or redshirt freshman or true sophomores. While the inexperience, as well as various injuries, are legitimate hurdles for UMass, FSU is just the latest foe to embarrass it with an offensive masterclass. All but two opponents have run for over 200 yards versus the Minutemen. One of those was Eastern Michigan who threw for 323 yards. The other was UConn, one of the worst rushing teams in the country.

UMass’ rush defense has been subpar all season, even for a team that recently went over two years without a win. The 365 yards it surrendered to the Seminoles was the worst total this season, but it’s nothing new. Entering Saturday, the Minutemen ranked 126 out of 130 in rush defense, allowing 226.7 yards on the ground per game per NCAA.com. They have also allowed 75 rushing first downs and are next to last in halting third-down conversions.

Lawrance Toafili, Treshaun Ward and D.J. Williams all helped contribute to the Seminoles rushing attack. Toafili added four carries for 63 yards, Ward ran for 57 yards on eight attempts and Williams totaled 31 on four attempts of his own. All three added a touchdown on the ground.

Next Saturday’s matchup against Liberty is yet another formidable rushing team. The Flames sport a top 30 rushing attack and average upwards of 200 yards per game. Kickoff is set for 12 p.m. as UMass will try to snag its second win of the season.